Rough Road Ahead for RV Stocks

Most days, I take a one hour break from sitting at my computer for hours on end to get some exercise. I usually walk the same four-mile route that takes me through several residential communities near my home.

Lately, I’ve noticed a growing number of recreational vehicles (RVs) parked in driveways and along the streets. Turns out, there is a good reason for that. Since the onset of the coronavirus pandemic, many Americans have purchased RVs so they can travel about the country without fear of infection.

It wasn’t that long ago that the RV industry was in crisis. In 2008, crude oil surged above $165 a barrel, driving gasoline and diesel fuel prices near all-time highs. The stock market crashed at the same time. As a result, new RV sales plunged more than 50% from 2007 – 2009 during the depths of the Great Recession.

Just as it appeared the economy was finally back on its feet, demand for RVs began to wane. Shipments of new RV units declined by 4.1% in 2018 and fell another 16% in 2019. Most of the blame was attributed to the aging baby boomer population, losing its zest for life on the road.

You can see the ebb and flow of demand for RVs over the past five years reflected in the performance of Iowa-based RV manufacturer Winnebago Industries (NYSE: WGO). WGO traded as high as $57 in December 2017, then fell steadily over the next 12 months before bottoming out below $20. 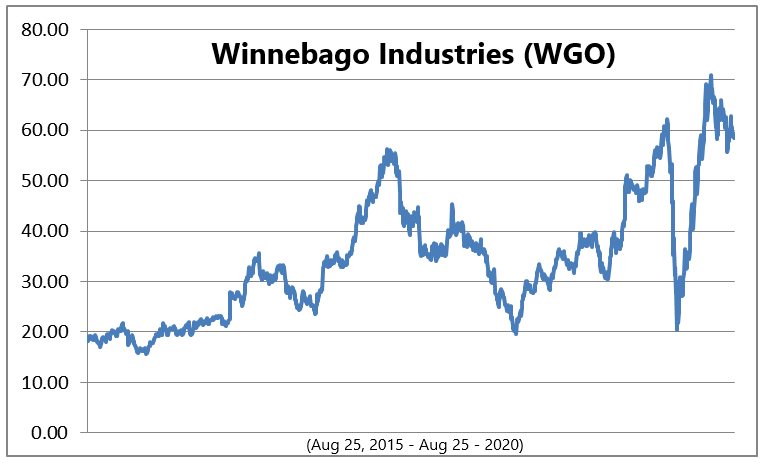 In early February, WGO traded above $60 for the first time ever. Six weeks later, WGO fell below $17 as the coronavirus pandemic shut down the global economy. By late May, it was back above $60 for one of the wildest roundtrips ever taken by an RV!

It isn’t just Winnebago that has been feeling the love for mobile living stocks recently. Shares of Camping World Holdings (NYSE: CWH) increased tenfold in value from their March low to their August high. CWH makes just about anything that goes inside, on, or outside an RV

Likewise, LCI Industries (NYSE: LCII), a manufacturer of RV components and aftermarket equipment has doubled in value since bottoming out five months ago. The message is clear: Americans want to get away, and for many of them an RV is the best way.

So now what? Summer is drawing to a close, and the economy is gradually starting to open back up. Is the RV craze over, or will a second wave of COVID-19 this winter send another round of new buyers into the showrooms?

From a fundamental perspective, most RV stocks now appear overvalued and vulnerable to a selloff. At a share price of $60, WGO is valued at 38 times trailing earnings. Even worse, CWH did not earn a profit over the past 12 months but expects to move into the black later this year.

From a technical perspective, the news isn’t much better. LCII just broke through its lower Bollinger Band last week and its RSI (relative strength index) dropped below 50. It has support near $105, about 12% below its recent share price.

As for WGO, it is holding up a little better than LCII but has been on a steady downward drift over the past two months. It has tested its support level near $56 twice during that span and rebounded both times, but if it breaks down the next time, it may have a long way to drop.

It may be too late to participate in this year’s resurgence by RV stocks. However, it’s not too late to get in on their eventual reversion to the mean. To do that, consider buying put options on one or more of the above-mentioned stocks. A put option increases in value when the price of the underlying security decreases in value.

For example, a few days ago while WGO was trading near $59, the put option expiring on January 15 at the $60 could be bought for $9. For this trade to become profitable, WGO must fall below $51.

That’s a 20% drop from where it is now, which may seem unlikely. However, the overall stock market could go through a major correction over the next four months pulling WGO down with it. Momentum has driven many stocks far beyond fair value, and if investor sentiment reverses course then we could witness just as big a move on the downside.

Read This Story: Amid the Rally, That Sinking Feeling

Even if the stock market remains steady, demand for RVs could take a big hit if the economy does not soon get back on track. Not only are RVs expensive to acquire, but they are costly to operate. A recent report estimated the total cost of living full-time in an RV at roughly $2,500 per month.

Admittedly, it may take longer than just a few months for the RV sector to rotate back towards the bottom. For that reason, you may be better off following the advice of my colleague, Jim Fink.

The way Jim Fink trades options greatly reduces their risk. After years of painstaking trial-and-error, Jim has perfected an options trading system that’s simple, safe, and predictable. How predictable? Out of the 346 total trade recommendations he has made over the past 50 months, 293 were profitable. That’s a “win rate” of 84.68%.