Warren Buffett turned 90 this week. He was famous when I began my career as a stockbroker 37 years ago. Now, he is a living legend and rightfully so.

Buffett is widely known for his long-term buy and hold strategy for building wealth in the stock market. Less well known is his penchant for using options to generate cash flow. Buffett sometimes writes covered call options against his portfolio holdings when he feels they are fully valued.

Buffett’s largest portfolio holding is Apple (NSDQ: AAPL). At the end of June, Buffett’s position in AAPL was valued at $89.4 billion. Since then, AAPL has gained 44%. Assuming Buffett has not changed the size of his position, it is now worth roughly $132 billion.

Read This Story: Boost Income With This Options Strategy

Here’s how covered call writing works. Let’s say Buffett believes AAPL is fully valued and he would like to generate some immediate income. A few days ago while AAPL was trading near $130, he could write (sell) the call option expiring on January 15 at the $130 strike price for $14 per share.

Buffett gets to keep that money no matter how AAPL performs. If AAPL is trading above $130 by that date then his shares will be called away from him at that price. If AAPL is below $130 at that time then he gets to keep his shares and the option expires.

Even if the shares are called away from Buffett, AAPL would have to rise above $144 for him to lose money on this trade ($130 strike price plus $14 options premium). That could happen, but to do so it would have to gain another 11% over the next four months.

I believe Apple’s run up the charts is about to come to an end. Most of its share price gain over the past year is due to an increase in the multiple investors are willing to pay for Apple’s earnings.

At the end of the third quarter of last year, Apple’s forward price-to-earnings ratio (FPER) was 17.3. That day, its share price closed one penny below $56 (split-adjusted). 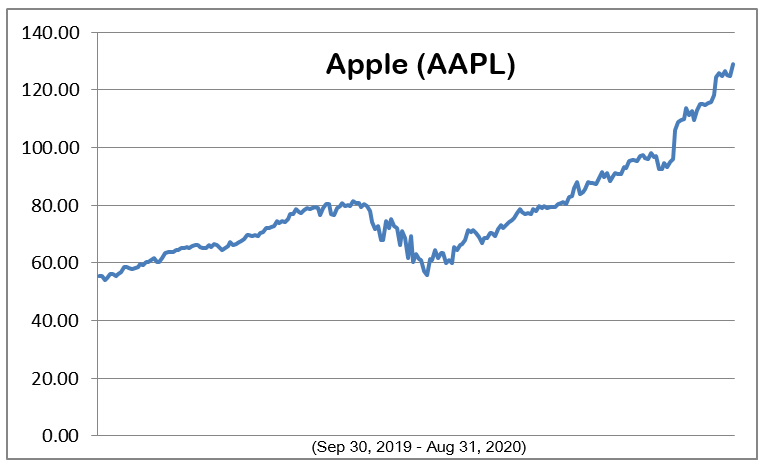 Now, Apple’s FPER is 31.9, roughly 84% higher than it was 11 months ago. That means the vast majority of its share price appreciation is due to how much more investors are willing to pay for Apple’s profits, and not a commensurate increase in its ability to generate profits.

Apple’s elevated FPER multiple is driven by optimism over how it will perform over the remainder of this year, which includes the critical holiday gift-giving season. Historically, Apple’s sales spike about 50% during the last three months of every year.

That could happen again this year. However, I can think of two good reasons why it may not. The first is declining consumer confidence over the past two months, which directly influences discretionary spending. You can thank the coronavirus pandemic for that.

The other is the possibility of some sort of retaliatory action by the Chinese government in response to how the U.S. has treated TikTok and Huawei. In effect, both companies have been banned by the Trump administration from doing business in the United States.

If China decides to reply in kind, perhaps no American company is more vulnerable than Apple. China accounts for roughly 15% of Apple’s total revenue and more than 20% of its gross profit. China also is a critical component of Apple’s supply chain.

Take it to the Bank

Apple CEO Tim Cook is well aware of the threats facing his company. That is why he has quietly been building another business within Apple during the past year.

You haven’t heard much about it because he doesn’t want to spoil Apple’s image as a cutting edge tech innovator. And what could be more “un-hip” than banking?

That’s right, banking. You may already use Apple Pay to buy groceries or conduct online transactions. If so, you also may have noticed that the company is strongly urging its Apple Pay users to link their accounts to a credit card issued by Apple.

As with all credit card issuers, Apple earns a cut of the fee charged to merchants that accept its card. One analyst estimates that Apple could generate $5 billion in additional revenue this way within a few years.

That’s not a lot of money for a business the size of Apple, but it is to the company that will be handling all of those banking transactions. I know the identity of that company and I started recommending it to readers of our Radical Wealth Alliance service less than four months ago.

Since then, this small company has appreciated more than 40%. I think it could go a lot higher. By my calculations, this stock could appreciate more than 2,000% in the years to come as Apple continues to grow its banking business.

Want to know more? I’ve written a full report that identifies this company by name and explains why I believe it is about to make a massive move to the upside