Welcome to my video update for today. In the article below, I delve into greater detail and highlight an investment opportunity that should weather the uptick in volatility.

Stocks last week fell for the second consecutive week, amid heightened volatility. Technology stocks suffered their worst decline since the pandemic-induced sell-offs in March. The tech-laden NASDAQ Composite is currently about 10% below its September 2 all-time high.

In pre-market futures trading Monday morning, all three major U.S. indices were trading higher, largely on vaccine hopes and news about mergers and acquisitions (M&As). I’ve warned you in previous articles that vaccine hopes are a mirage.

However, in Tuesday’s Mind Over Markets, I will examine how the surge in M&A activity is a bright spot for stocks.

Fueling last week’s declines were worries over excessive valuations, the failure of Congress to agree on a coronavirus stimulus bill, and signs that the labor market is weakening.

By contrast, last week was the second consecutive positive week for the MSCI EAFE exchange-traded fund (the acronym stands for Europe, Australasia and Far East). The EAFE rose 1.4%, after a previous weekly rise of 0.6%. Take a look at my first graphic: 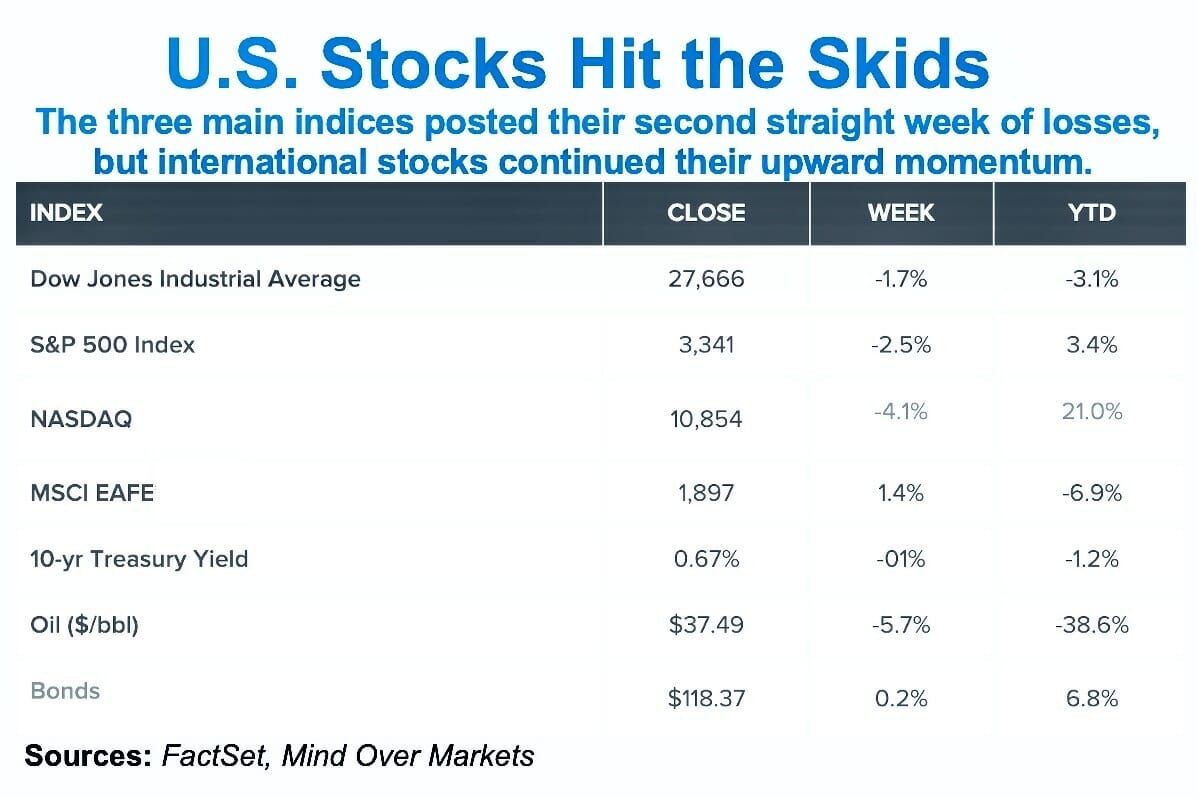 The pandemic is further under control overseas than in the U.S. and factories in Europe and Asia are getting back up to speed. In America, the recovery is more tentative.

The U.S. Labor Department reported last Thursday that more than 857,000 workers filed new claims for state unemployment insurance in the week ending September 5, a slight increase from the previous week. On a seasonally adjusted basis, the total was 884,000, unchanged from the revised figure for the previous week.

In addition, about 839,000 new claims were filed under a federal program called Pandemic Unemployment Assistance (PUA), which gives help to part-time workers, freelance contractors, and others who don’t typically qualify for state benefits. The PUA figure showed a rise from 748,000 the previous week.

The unemployment rate fell to 8.4% in August, but the persistently high level of layoffs shows that workers are still struggling and the “recovery” is uneven (see chart). 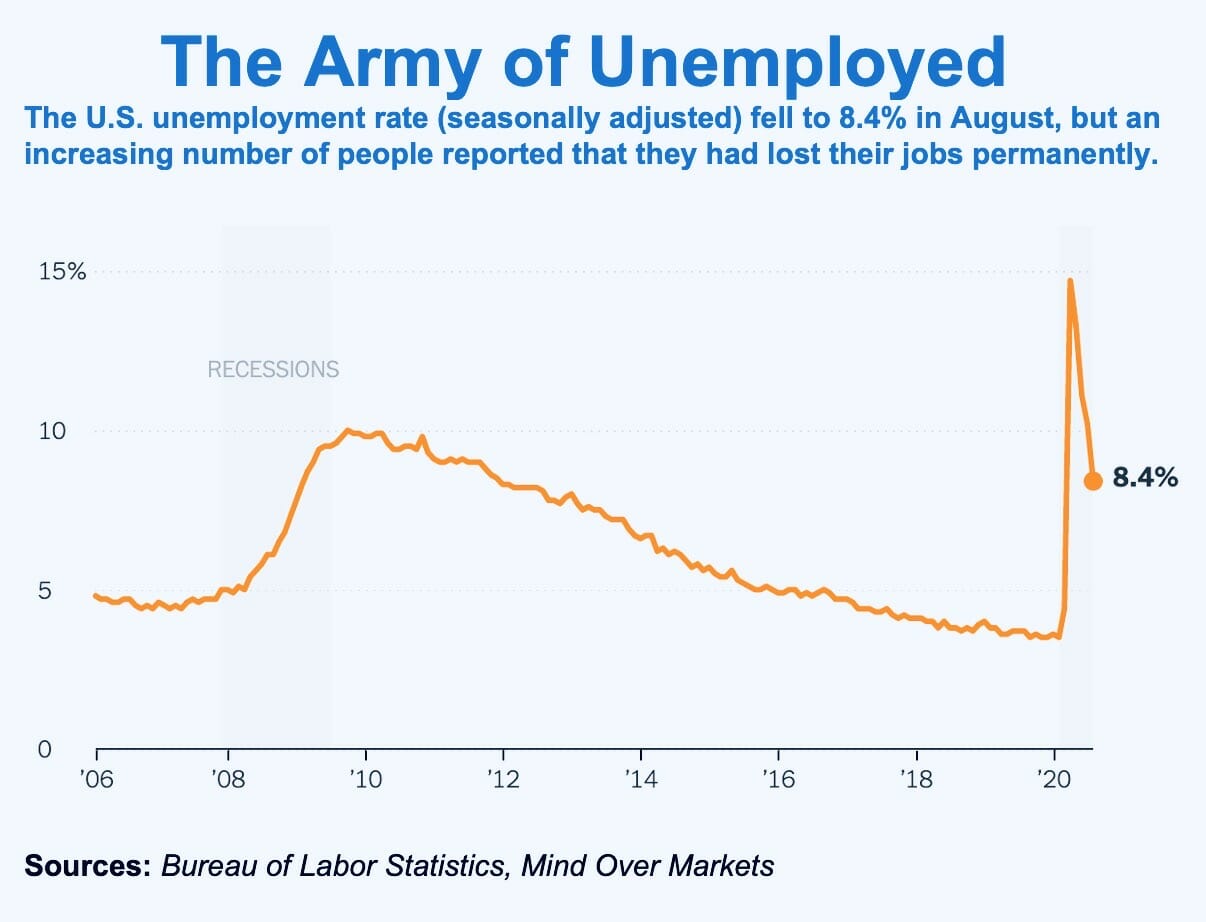 A new coronavirus relief bill died last week in Congress along party lines, leaving millions of Americans on the brink of destitution.

Keeping a floor under stocks has been extremely dovish Federal Reserve policy. The monetary policies enacted by the Fed since early 2020 include slashing the federal funds rate to near 0% and buying corporate and municipal bonds.

However, leverage in the form of government, corporate, consumer, and financial debt is at records and rising, which limits the future ability to stimulate economic growth. The disconnect between the economy and the stock market isn’t sustainable. Distortions in the stock market are likely to produce a correction later this year.

More than half of all stocks are owned by only 1% of Americans, while the bottom half of the population owns only 0.7% of the market. The “one percent,” as they’re sometimes called, are heavily invested in large tech companies. So far this year, most of the S&P 500’s gains have been driven by five mega-cap tech stocks: Apple (NSDQ: AAPL), Amazon (NSDQ: AMZN), Google parent Alphabet (NSDQ: GOOGL, GOOG), Microsoft (NSDQ: MSFT), and Facebook (NSDQ: FB).

And yet, small companies account for the vast majority of jobs and these employers are going bankrupt in droves. Even blue-chip global corporations can’t thrive when consumers are too broke to buy their products and services.

Unemployed Americans are at risk of losing their homes, health insurance and Internet service. What does that say for the future of the digital economy if millions of people can no longer afford the Internet? These vital issues are rarely discussed on CNBC because they’re a “downer” and bad for ratings. But these issues are real and they threaten the financial markets.

Corporate earnings for the second quarter underscore the struggles of most companies. Q2 earnings for the S&P 500 reflect a year-over-year decline of 30.2%, with health care the top performing sector and energy the worst, according to data compiled by research firm Refinitiv (see chart). 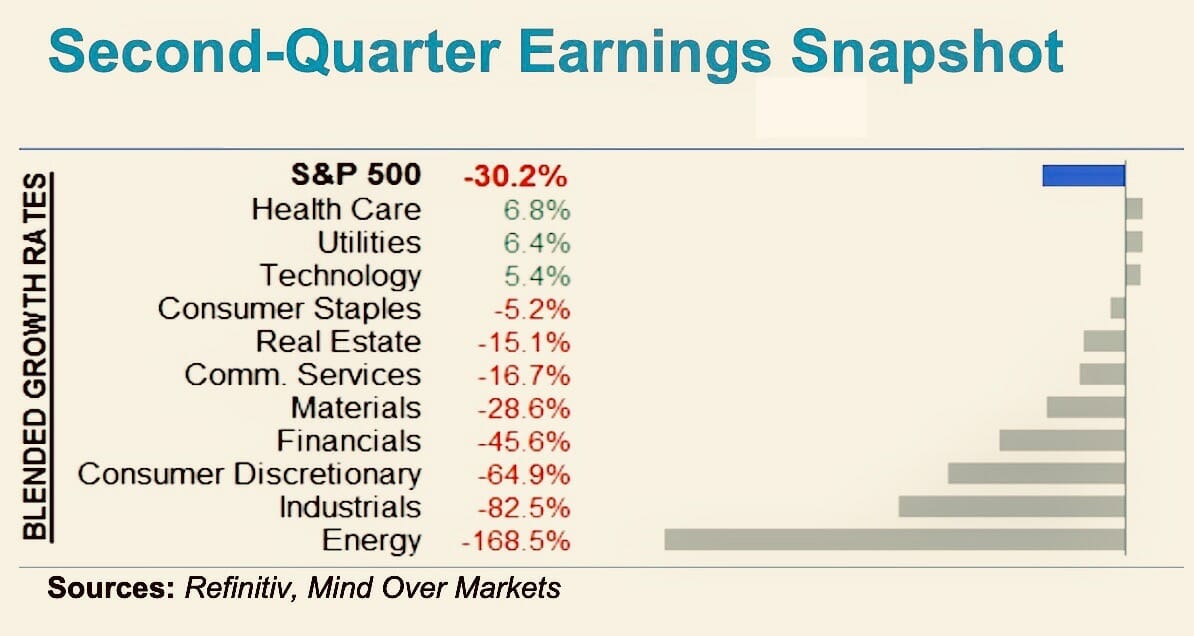 The health care sector is a smart bet now, as the pandemic brings medical needs to the fore. Major drug firms have been merging with smaller rivals, as Big Pharma puts its huge cash hoards to use. I expect the pace of mergers and acquisitions (M&A) to pick up speed in the coming months, not just in health services but other sectors as well, especially technology. Greater M&A is a bright spot, but it won’t be enough to keep the broader market from a day of reckoning.

As if the pandemic weren’t bad enough, Brexit is back in the headlines. Brexit could threaten recent gains in international indices.

Britain formally exited the European Union on January 31, 2020, a seismic event that began an 11-month transition during which British and EU leaders were supposed to negotiate their future relationship. Until that “grace period” is over, Britain remains in the EU customs union and single market and must adhere to EU law, although it lacks a seat on any EU institution.

Britain and the EU have made no progress in their negotiations and they’re back to squabbling. Conservative Prime Minister Boris Johnson is now threatening to leave the EU on October 15, with or without a deal. A no-deal (aka “hard”) Brexit seems likely, as the insult-laden debate in Parliament between Labor and Tory politicians descends to the level of a Monty Python farce.

Why should you care about Brexit? Because the world’s second-largest economy isn’t China. It’s Europe.

The EU is collectively the world’s second-largest economy, in nominal terms, after the United States. A hard Brexit would further dampen growth in the EU and by extension the global economy, further exacerbating harm from the pandemic.

Despite this litany of woes, you can still find ways to make big profits. In fact, our investment experts have unearthed a hidden value play in technology that’s poised for exponential gains, despite the headwinds afflicting the rest of the financial markets.