Economic Pundits: Wide of the Mark

Sometimes it seems that the art of forecasting is the art of saying what will happen, and then explaining why it didn’t.

From the beginning of the coronavirus-induced recession in February, the consensus of economic experts has consistently underestimated the intensity of the downturn. To be fair, we’re in uncharted waters and many metrics have been rendered unreliable. But you also have to factor into the equation political spin, wishful thinking and intellectual dishonesty.

It’s difficult to make the right investment decisions when economic projections have been so wide of the mark. Below, I’ll steer you toward the “new rules” of wealth accumulation for these highly uncertain times.

The pundits lately have racked up a terrible track record. In February, key policymakers told us that a recession wouldn’t even happen. In March, the median analyst forecast for second-quarter U.S. gross domestic product (GDP) growth was roughly 0%. Over the next 20 days, that number plunged 30 percentage points. The actual number came in at -33%.

As April got underway, we started to hear confident predictions of a V-shaped recovery. Never happened. In fact, after a partial recovery, the economy appears to be backsliding.

The International Monetary Fund currently predicts that global GDP will contract by 4.9% this year, downgrading its estimate from April, when output was forecast to shrink by 3%. Quarterly earnings estimates in the pandemic era have been subject to stark revisions as well, with the highest number of surprises (positive and negative) since 2008, according to research firm FactSet.

As the coronavirus surges anew in the U.S and overseas, all bets are off as to whether we’ll experience a strong and sustained recovery in early 2021. The scars of the pandemic run deep.

Let’s look at two industries that are seen as barometers for the overall economy: airlines and energy. When times are good, we travel more and freight volumes grow. We also consume more energy. Both sectors are in lasting trouble.

The chief executives of the nation’s major air carriers held a press conference Tuesday calling for a six-month extension of a federal payroll support program that has expired. They’re lobbying Congress for a new $25 billion bailout to prevent thousands of employee furloughs slated to begin October 1.

Problem is, Congress is embroiled in a bitter fight to replace the Supreme Court seat vacated by the death of Ruth Bader Ginsburg and there are only five weeks until the presidential election in November. Chances of the airlines getting help before the election are slim; the same goes for a new coronavirus relief package.

According to the International Air Transport Association, airlines globally are projected to lose a record $84 billion in 2020, more than three times the loss incurred during the Global Financial Crisis.

Energy has been the worst performing sector during the pandemic and its woes are far from over. Year to date (as of market close Tuesday), the benchmark SPDR S&P Oil & Gas Exploration & Production ETF (XOP) has generated a loss of -51.03%. Crude oil prices have been stuck at about $40 per barrel, which is generally below the threshold whereby producers can break even.

The plunge in oil prices is putting severe pressure on the finances of major energy companies. Middle Eastern oil producers are increasingly tapping the debt markets to close the gap in government finances, as their treasuries run dry of oil revenue. Debt among energy companies has reached toxic levels, leading to a wave of bankruptcies and slashed dividends throughout the sector.

Amid this backdrop, make sure you have the right asset allocations in your portfolio. The following allocation chart is recommended by our flagship publication, Personal Finance. Consider these percentages as rough parameters and tailor them to your particular risk tolerance and stage of life. 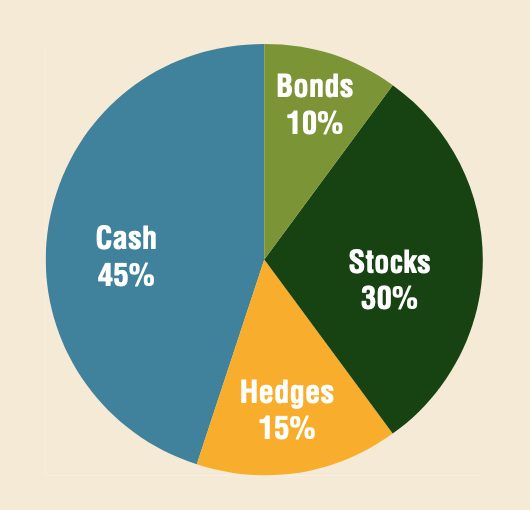 If you haven’t done so already, now’s a good time to pocket at least partial gains from your biggest winners. Overvalued large-cap tech stocks are good candidates. Keep plenty of cash on hand (at least 45%, as the chart shows) to prepare for the stock market correction that likely awaits us.

We haven’t witnessed a concentration of wealth this severe since the Roaring Twenties. What does that bygone era have in common with today? Technological dislocation combined with an unsustainable asset bubble. We saw the result in October 1929. We could face a similar reckoning.

The coronavirus pandemic has widened the chasm between the super-rich and average workers. Massive unemployment has caused hardship for millions of Americans, whereas the wealthiest one percent are doing better than ever.

The economy remains mired in a deep recession and yet stock valuations are at their highest levels in modern times. These disconnects can’t last.

America faces what my colleague Dr. Stephen Leeb calls a “reset” of our economy that will revolutionize the way we work, save and invest. Advanced technologies are coming to the fore that will usher in a world that you’ll barely recognize.

If you want to survive this reset, you must get into the right kinds of investments now. As I’ve just explained, many economic forecasters are in the dark. In these fraught times, acquiring wealth requires new rules. For details, click here for our special report.