President Ronald Reagan is counted among the pantheon of great presidents. However, like any politician, he was known to occasionally make dubious assertions. When it comes to marijuana, the Gipper had this to say:

“I now have absolute proof that smoking even one marijuana cigarette is equal in brain damage to being on Bikini Island during an H-bomb blast.”

Regardless, Reagan’s over-the-top alarmism about marijuana reflected the War on Drugs that was raging during the 1980s, when his wife Nancy launched her “Just say no” campaign. Much has changed in the decades since, as public opinion overwhelmingly embraces marijuana use and an increasing number of states and localities legalize weed.

But old biases die hard. Over the past week, we’ve seen progress in marijuana legalization but also a resurgence of prohibitionist sentiment. Let’s take a look at the latest legal, regulatory and political developments regarding marijuana and other psychotropic substances. If you’re a marijuana investor, you ignore these matters at your peril.

Two steps forward, one step back…

But positive steps occurred as well.

The Senate on Tuesday sent President Trump a short-term funding bill, which he signed, that continues state medical cannabis protections through December 11.

The Public Lands Coalition, consisting of environmental groups including the Montana Conservation Voters and Montana Wildlife Federation, is endorsing marijuana legalization initiatives that are on the November ballot in that state. Under these measures, about 50% of the state’s cannabis tax revenue would be earmarked for conservation programs.

The coalition points out that the marijuana-generated funds would provide access to additional matching federal dollars to support public lands (see chart). 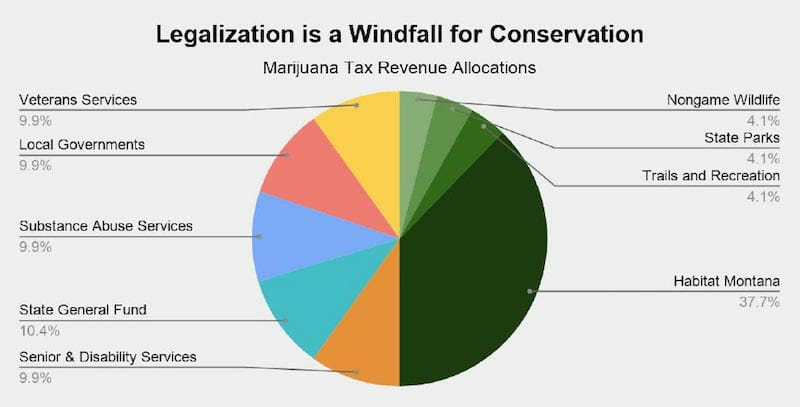 The incoming prosecutor for Washtenaw County, Michigan pledged that he wouldn’t pursue psychedelics possession cases throughout the entire county, in the wake of the Ann Arbor, Michigan City Council’s vote to decriminalize entheogens. An entheogen is a psychoactive substance that causes alterations in perception, mood, consciousness, cognition, and behavior.

The fate of a bill to legalize marijuana sales in Vermont hangs in the balance, after Gov. Phil Scott (R) last Tuesday cited racial justice concerns. Gov. Scott said: “In terms of the pot bill, I haven’t made up my mind about that. I have received a lot of groups, racial equity groups, that are asking me to veto it. I was leaning towards letting it go, but I’m really questioning that at this point. I want to hear and listen from them.”

The latest polling data show that Arizona’s marijuana legalization measure on the November ballot is ahead, 57%-38%.

California Gov. Gavin Newsom (D) on Tuesday signed bills on cannabis banking and to set up a system of labeling for cannabis appellations of origin. An appellation of origin is a protected designation that identifies the geographical origin of a product and how that product was produced.

Pennsylvania Gov. Tom Wolf (D) tweeted: “Other states are pushing to legalize adult-use marijuana. Tell your legislator: Let’s legalize in Pennsylvania and keep those profits here, in our own backyard.”