Taking it to the Bank

Last week, you could have doubled your money in a single day on Wells Fargo (NYSE: WFC). The banking giant released Q3 results that beat on total revenue but came up short on earnings. As a result, WFC fell 5% that morning.

If you are a Wells Fargo shareholder, a 5% drop may not make much of a difference to you. The stock has already lost more than half of its value since a bogus account opening scandal rocked the company in 2016.

However, if you owned put options on WFC expiring at the end of last week then that 5% move had enormous implications. That’s because the put option at the $24 strike price went from being nearly worthless to in-the-money in the blink of an eye.

On October 13, WFC closed at $24.74. With only three more days to go until the monthly options expiration date, it seemed unlikely that the stock would fall below $24 by the end of the week. 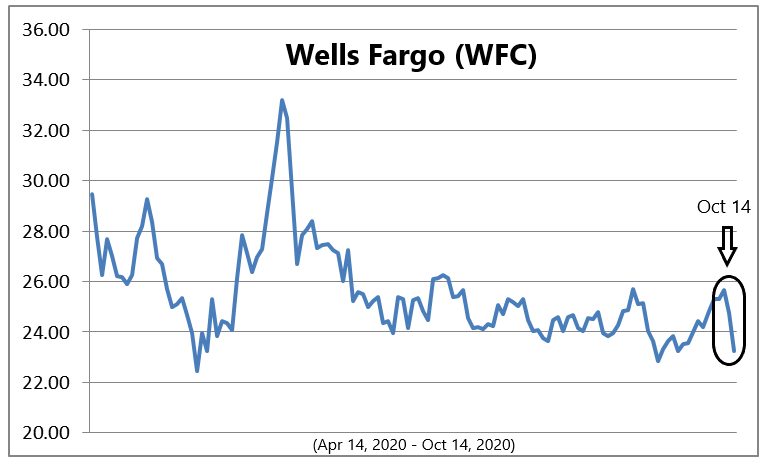 All that changed on October 14 when Wells Fargo revealed that it took a number of large write-offs during the third quarter that reduced its net income. Among them was a $961 million charge for “customer remediation accruals” related to the incident four years ago.

The company also took a $718 million restructuring charge for severance costs. The coronavirus pandemic has forced the bank to shut down many of its branch locations, requiring less staff.

In addition, the pandemic caused the bank to incur higher costs for sterilizing the equipment used in its branch locations and other related expenses that amounted to almost $1 billion. On top of all that, the bank’s net interest income decreased as a result of historically low interest rates.

The analysts that evaluate Wells Fargo didn’t do their clients any favors. Of the 31 Wall Street investment banking firms that follow the company, 12 of them have it rated as a buy. Only four of them rate it as a sell, which appears to be the correct call in light of last week’s results.

Read This Story: How to Beat Wall Street’s Sleight-of-Hand

If you can’t trust Wall Street to tell you when to sell a stock, what other resources can you turn to? If you want to know what the professional money managers think of a company you can review their Form 13F filings at Whalewisdom.com.

At the end of each calendar quarter, every institutional money manager with at least $100 million in assets under management must submit a Form 13F to the U.S. Securities and Exchange Commission. This document discloses their current holdings and any changes in positions from the previous quarter.

That is how we learned of Warren Buffett’s 27% decrease in his holding in Wells Fargo two months ago. At one time, Buffett was one of the company’s largest shareholders. The fact that Buffett is bailing out on the stock speaks volumes about his view of the banking business these days.

Another metric to consider is short interest in a stock. Short interest is the number of shares that have been sold in a stock without being owned. The seller intends to buy those shares back later at a lower price to earn a profit.

The problem with both of those methods is that they can generate a lot of false positives and false negatives. In the week leading up to Wells Fargo’s earnings release, short interest dropped when it should have been rising.

Since 13F filings are submitted two weeks after the end of each quarter. That means as much as three months could have passed by the time you learn of those trades. That isn’t much help when it comes to trading put options.

What is helpful is having a system that identifies overvalued stocks that are vulnerable to a sudden selloff. You don’t need to find a company that is on the verge of collapse. As we just witnessed with Wells Fargo, a 5% drop in a stock’s price can sometimes generate a 100% gain in just one day.

I have developed such a system. Right now it tells me that there are 45 stocks that are grossly overvalued. Next, I will look at the technical indicators to see which ones appear most at risk of taking a dive soon.

I believe the timing is perfect for this type of trading strategy. The stock market is soaring despite high unemployment and a weak economy. I think that will soon change.

Every day for the next several weeks, dozens of companies will be releasing their quarterly results. In less than a month, we will know the initial results of the general election on November 3. At the same time, the daily case count for COVID-19 is back on the rise.

This is no time to be a passive investor. Instead of buying an index fund and hitting the snooze button, take some of that money and “put” it to work, as I explain in this FREE TUTORIAL.