How Much Does the Election Matter?

By the time you read this, (hopefully) you already know who will be in the White House for the next four years and who won the down ballot races. As of this writing, I don’t know who the new president will be. If some states are too close to call, it’s possible there will be no conclusive winner declared until after the actual Election Day.

With COVID-19 wreaking havoc and various divisive and emotionally charged issues on the table, the 2020 election could turn out to be one of the most consequential in recent history.

This has certainly been a volatile and unusual year for stocks, with a crash in February/March followed by a huge rebound. The main cause is the pandemic, which makes it difficult to gauge how much the presidential race affected the market. 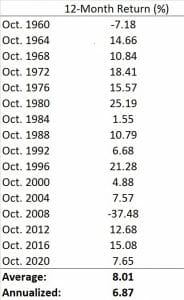 To make pulling the large amount of data less cumbersome, I used October 31as the cutoff date for each period. For example, the “Oct. 2020” return covers the 12 months from November 2019 through October 2020.

As you can see in the table, the average return for these periods was almost exactly 8%. Annualized, the return per year was 6.87%, almost the same as the S&P 500 annualized return for the entire 60 years: 6.85%.

Note that those election year numbers include 2008, which was a nightmarish year for investors. The huge negative return that year threw off the average and annualized returns. The drop had much more to do with the Financial Crisis and Great Recession than the presidential election between Obama and McCain.

But regardless, the impending election by itself doesn’t seem to have clear evidence of affecting the market. Rather, the market action is a function of other forces, such as the state of the economy and monetary policy.

Moreover, there are limits to what a president can do. Congress is the political body that drafts and passes new laws.

This year, if Biden wins and the Democrats win a majority in the Senate, then “team blue” will have control over the White House and both chambers of the the legislative branch. Democrats are expected to not only keep but expand their majority in the House of Representatives. What’s more, in the unlikely event that the Dems end up with 60 seats or more in the Senate, they would be able to end any filibuster attempt to stall the passage of a bill. The chances of significant legislative changes that can affect the market go up if Democrats “sweep” the election.

On the one hand, if Democrats emerge victorious, corporate taxes could go back up. Biden proposes raising the corporate rate to 28% from 21%. On the other hand, a massive new stimulus package is more likely under Democrat rule.

Read This Story: After The Election…a New Dawn for Investors

Democrats have proposed a $2.2 trillion plan and more could be on the way after that. One factor that should be favorable to investors, though, is that a Biden administration would likely be less confrontational with China on the tariff front. Washington’s attention instead would be focused on defeating COVID-19 and supporting the economy. As you may recall, before the pandemic struck, trade relations with China were a major uncertainty causing market volatility.

Even though Democrats have a reputation for being unfriendly to business, the stock market has historically performed better under a Democratic president. But as this year has proven, events are unpredictable. Who last year expected that a pandemic would be the top story of 2020? It’s a good idea to be prepared no matter what happens. That’s where the “yellow metal” comes in.

To brace for further volatility, it’s prudent to own gold. Gold also makes for an excellent long-term growth investment, not just a short-term hedge against market downturns. For details about our favorite gold play, click here.