The Political Seachange for Psychedelics

“Magic mushrooms” aren’t just for getting high and playing your old Iron Butterfly albums. These versatile fungi are entering the consumer mainstream and they’re evolving into a major investment theme.

Magic mushrooms are wild or cultivated mushrooms that contain psilocybin, a naturally occurring psychoactive and hallucinogenic compound. An increasing body of research is showing that these mushrooms confer medical and psychological benefits. They can help alleviate physical pain, depression, anxiety, chronic headaches, PTSD, and a host of other ailments.

Voters on November 3 in Oregon and the District of Columbia approved ballot initiatives to decriminalize the consumption of magic mushrooms, by margins of 56% to 44% and 76% to 24%, respectively.

Magic mushrooms are destined to play key roles in the future of therapy, in medicine and psychiatry. From coast-to-coast in the U.S., there’s increasing activity to lift legal restrictions on ‘shrooms.

Just one week after voters in Oregon and DC passed by wide margins ballot measures to scale back prohibitions on psychedelics, California senators on November 10 vowed to introduce a bill to decriminalize the substances in their state.

The following tweet, posted on November 10 by the leader of the California effort, tells the story: 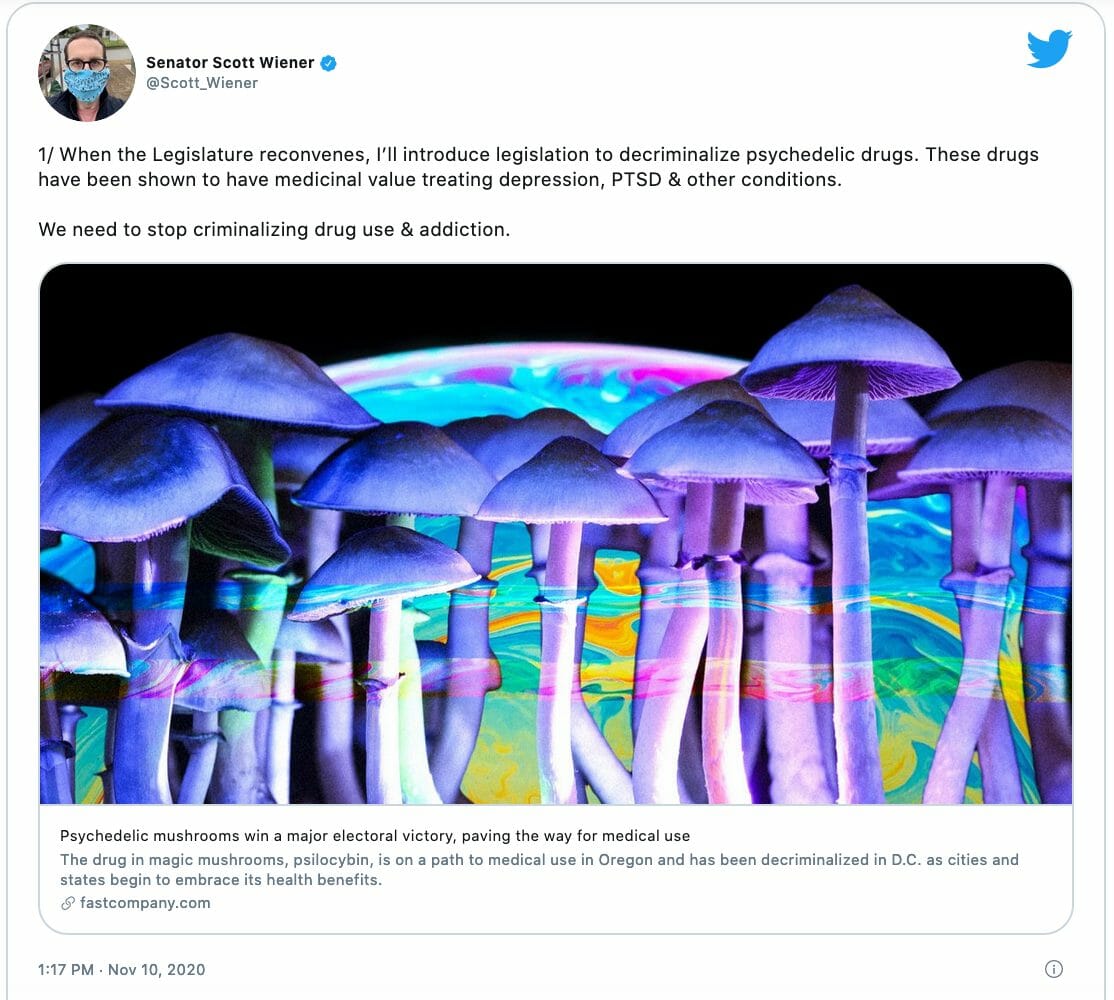 The California senators announced they will file a bill to decriminalize psychedelics in the state in 2021. At the same time, San Francisco activists are lobbying the state’s district attorney to make psychedelics the lowest local law enforcement priority.

Read This Story: Just Say Yes: Marijuana Reform Is On a Roll

Marijuana legalization also racked up big wins in last Tuesday’s general election, with the passage of several legalization measures at the state level. As I’ll explain below, cannabis and psychedelics are becoming intertwined as investment opportunities.

Magic mushrooms have earned a special place in story and song, but they’re illegal on the federal level and throughout states and localities.

The U.S. Department of Justice lists psilocybin as a Schedule I controlled substance. “Scheduling” is a system by which the U.S. Drug Enforcement Agency decides which substances are dangerous and which substances are medically useful. The Controlled Substances Act, the legislation surrounding the scheduling system, was created in 1970, when the nation’s War on Drugs was getting into full swing under the Nixon administration.

But these days, citizens are successfully waging war…against the war on drugs.

Denver, Colorado, and Santa Cruz and Oakland in California, already have measures in place similar to Oregon’s and DC’s.

In 2018, the U.S. Food and Drug Administration (FDA) granted psilocybin “breakthrough therapy status,” putting the substance on the fast-track to legality as treatment for mental health.

Big Pharma has jumped aboard the psilocybin bandwagon to take advantage of the FDA’s fast-track status for the substance.

The psilocybin research will take months if not years to bear results, but it’s a vivid example of how the corporate establishment is putting billions of dollars behind a substance once associated with hippie outlaws. These firms also are looking into marijuana for its potential use in medical treatments.

I’m keeping an eye on efforts to bring mushrooms into the consumer mainstream. In the meantime, we’ve pinpointed the best cannabis investments available. Click here to learn more.