Marijuana: The Final Days of Prohibition

When I watch these movies nowadays, I think of the parallels with marijuana.

The inevitable demise of marijuana prohibition is reminiscent of the repeal of alcohol prohibition in 1933. That year, millions of thirsty Americans turned from mobsters to legitimate businesses for wine, beer and hard liquor. The high rates of violence and incarceration associated with enforcing the Volstead Act plummeted. The share prices of alcoholic beverage companies soared.

Nearly 90 years later, we’re about to witness the same dynamic with weed.

In a landmark move, the U.S. House last week passed with overwhelming bipartisan support the Marijuana Opportunity, Reinvestment and Expungement (MORE) Act. The legislation (H.R. 3884) would remove cannabis from the federal Controlled Substances Act, expunge past marijuana-related convictions and require certain criminal cases to be resentenced.

The Democratic-controlled House is marijuana friendly, but the same can’t be said for the GOP-controlled Senate. MORE faces a tougher road in the Senate, but if the Democrats gain control of the chamber after the January 5 Georgia run-off elections, passage of MORE will be assured. President-elect Joe Biden has indicated his support for MORE, which was introduced by Vice President-elect Kamala Harris in 2019.

Senate Majority Leader Mitch McConnell (R-KY) has given signals that his anti-MORE stance could soften in 2021. Polls show that Americans overwhelmingly favor marijuana legalization and even McConnell (aka “Dr. No”) can read the polls.

The stakes are high. In a report released last Friday, the Congressional Budget Office (CBO) projected that the marijuana legalization bill the House passed last week would add $13.7 billion in net revenue to the federal budget over 10 years. The bill also would cut 73,000 years’ worth of prison time and save $1 billion in incarceration costs.

“CBO and the staff of the Joint Committee on Taxation estimate that H.R. 3884 would increase revenues, on net, by about $13.7 billion over the 2021-2030 period by creating business income, compliance, and occupational taxes; those increases would be partially offset by allowing certain deductions for business expenses associated with trafficking controlled substances.”

Just days after the House approved the historic MORE Act, the chamber is getting ready to vote this week on another major piece of marijuana-related legislation. Called the Medical Marijuana Research Act, this separate bill would establish a simplified registration process for researchers interested in studying cannabis, in part by reducing approval wait times, minimizing unwieldy and costly security requirements, and abolishing several layers of protocol review.

From illicit to perfectly legal…

According to a report released December 7, the marijuana research firm New Frontier Data projects that total U.S. legal cannabis sales will surpass $20 billion in 2020, with the combination of post-election expansion and existing state markets fueling a projected compound annual growth rate of 21%, to reach $41.5 billion by 2025 (see the following charts). 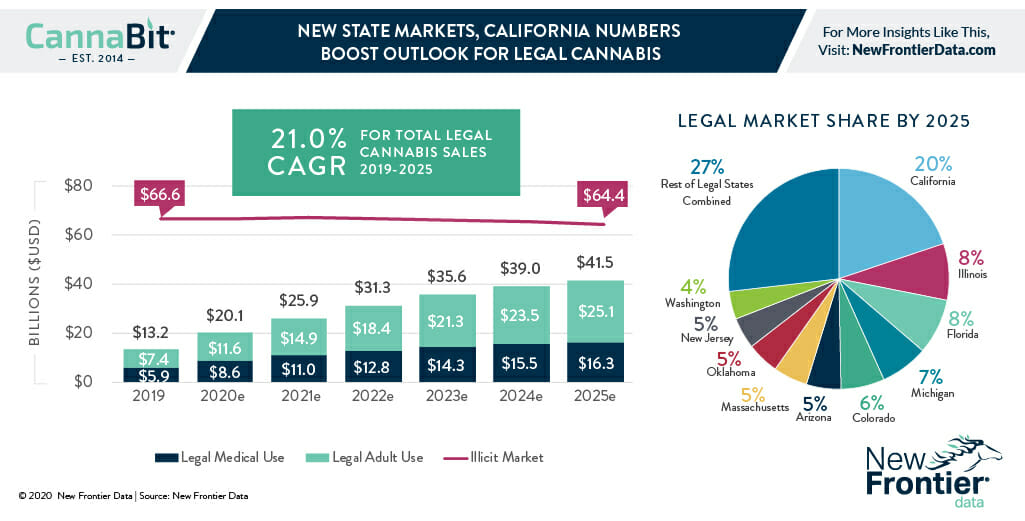 McConnell will probably try to stall Senate passage of MORE (at least at first), but it’s only a matter of time before it one day becomes law. When it does, the investment floodgates will swing wide open.

You should invest in the booming marijuana sector before the lifting of the federal ban on weed. Our investment team has found an outstanding pot stock that deserves a place in your portfolio. It’s a small-cap drugmaker that has developed a non-addictive “marijuana pain pill.” The pill is a cannabis-based, non-opiate pain remedy that could be the blockbuster pharmaceutical of the future.

Now’s the time to invest in this medical marijuana company, while it’s still flying under the radar. Click here for details.