While attending Boston University in the 1970s, I’d sometimes visit Filene’s Basement. The legendary department store chain (now bankrupt) specialized in selling famous brand names at deeply discounted prices. The chain derived its name from the subterranean location of its flagship store in downtown Boston, located near my campus.

Filene’s Basement comes to mind, as I review the beaten-down energy sector. A slew of inherently sound oil and gas stocks are sitting on the discount shelf, waiting for aggressive bargain hunters to scoop them up.

Signs that the economy will take off next year have prompted investors to rotate into cyclical sectors. Energy stocks have been beneficiaries of this dynamic over the past few weeks. This rotation into economically sensitive, cyclical “value plays” should continue in Q1 2021.

Pullbacks can be desirable because they generate opportunities for investors to establish positions in high-quality companies at appealing value. Such is the case in the energy sector today.

Our in-house energy expert, Robert Rapier, recently explained a method that allows investors to find reasonably valued stocks to fit their particular style, in any sector: How to Tap the Power of Stock Screens.

To be sure, the energy sector has been one of the hardest hit this year. As the economy reeled from the coronavirus pandemic, energy demand and prices plunged. The shares of oil and gas companies have greatly underperformed the broader market. The benchmark SPDR S&P Oil & Gas Exploration & Production ETF (XOP) has generated a year-to-date total return of -37.08%, compared to +17.72% for the SPDR S&P 500 ETF Trust (SPY), as of market close December 29.

The astonishingly fast collapse of oil demand and prices blindsided even the most seasoned energy analysts. However, economic growth is returning and many energy companies seem to have learned from the mistakes they made during the previous boom. To be sure, scores of energy firms have gone bankrupt because of overproduction and unsustainable debt. But the strongest have survived and they’re positioned to reap the rewards of a rebound in energy prices.

Through mergers and acquisitions and cost efficiencies, many energy companies have repaired their balance sheets and gotten into leaner shape. It would be short-sighted for investors to ignore the energy patch because of its recent pandemic-induced woes. Successful investors are forward looking.

With the start of a new year approaching, it’s instructive to see where analysts are most optimistic in terms of their ratings on stocks in the S&P 500.

At the sector level, analysts are the most optimistic about energy, with 62% Buy ratings (see chart, with data as of December 21): 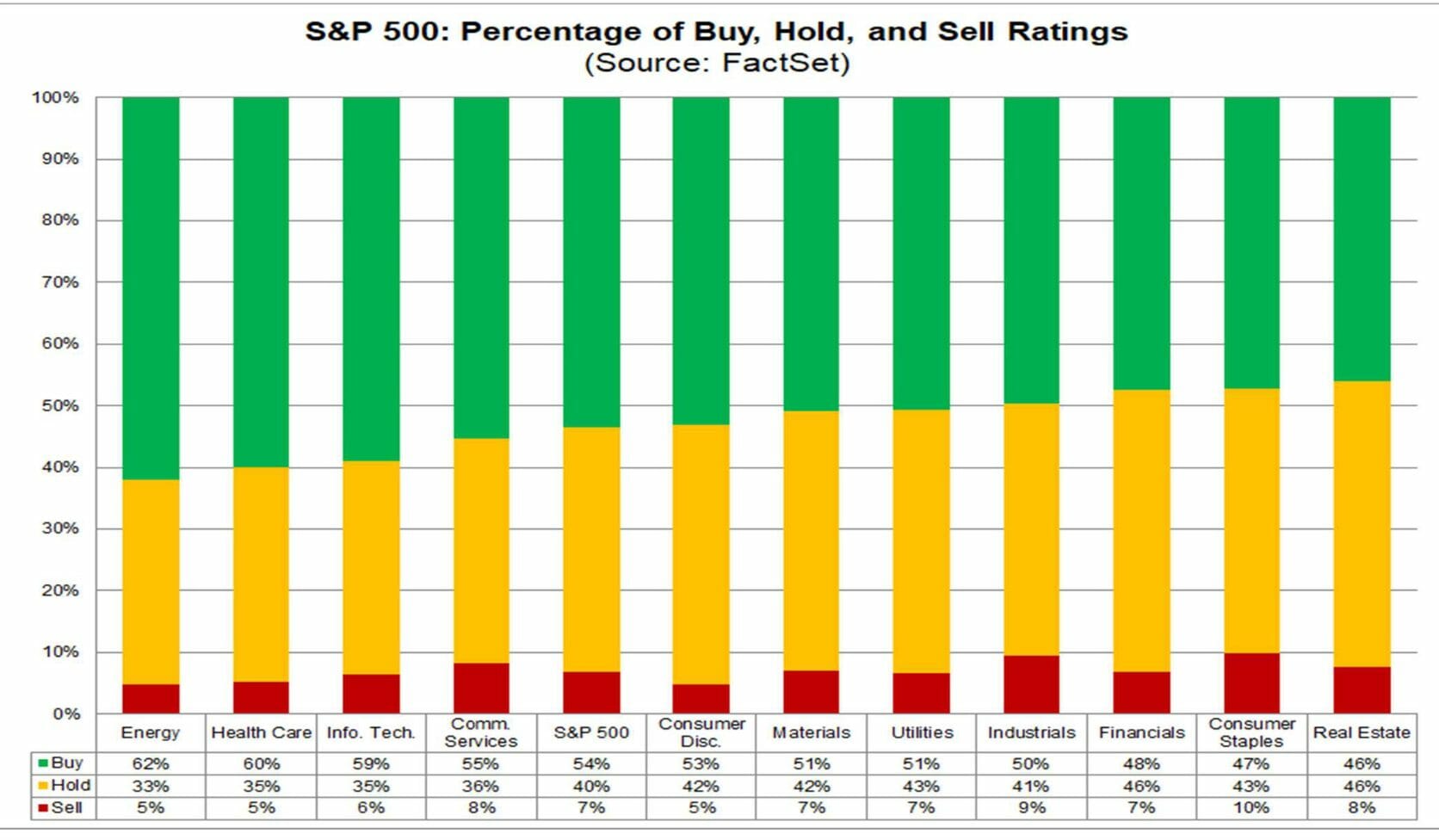 Constrained crude oil production is helping to make the bull case. OPEC+ this month announced that it had reached an agreement to pare current production cuts of 7.7 million barrels per day (bpd) to 7.2 million bpd beginning in January 2021.

The new agreement essentially raises the cartel’s collective production by 500,000 bpd. It’s not a deep extension of production cuts, as many analysts were hoping for, but the cartel isn’t recklessly throwing open the spigots, either.

OPEC+ refers to the 13 official members of the Organization of the Petroleum Exporting Countries and 10 other non-OPEC partners including Russia. The five founding members of OPEC were Venezuela, Iraq, Saudi Arabia, Iran and Kuwait. The de facto leader is Saudi Arabia.

Once an unassailable juggernaut, OPEC+ this year has been roiled by internal spats and oil price wars that at one point in April drove the per-barrel price of West Texas Intermediate crude to nearly $40 below zero. But lately OPEC+ has shown sufficient discipline (under the firm hand of Saudi Arabia) to keep a reasonable lid on production, which in turn should prevent a price-crushing global glut.

According to an estimate released Tuesday by the American Petroleum Institute, U.S. crude inventories fell by 4.785 million barrels last week, after a build of 2.7 million barrels the previous week. The data eased fears about the energy demand outlook and boosted oil prices. As the following chart shows, crude oil has rebounded over the past three months: 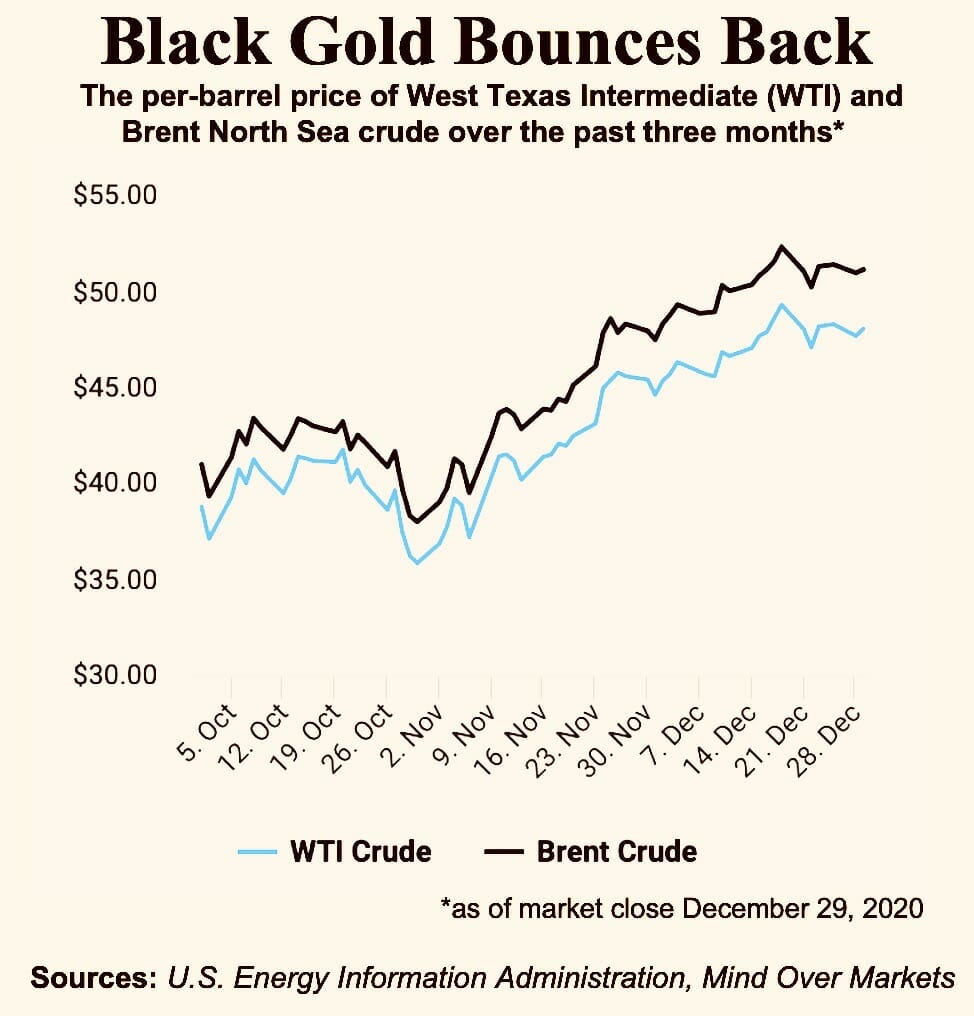 According to the Short-Term Energy Outlook released December 8 by the U.S. Energy Information Administration (EIA), monthly Brent North Sea crude spot prices will average $43/bbl during the fourth quarter of 2020 and rise to an average of $49/bbl in 2021 as oil markets regain a semblance of equilibrium. Brent is the benchmark on which international oil prices are based.

EIA also expects monthly average spot prices for natural gas to average $3.10 per one million British Thermal Units in 2021, which is up from the forecast average of $3.01/MMBtu for 2020.

Every portfolio should have exposure to the energy sector. When looking for bargains, focus on strong cash flow, manageable debt, ample proven energy reserves, and cost-effective operations. Energy companies with low costs can remain competitive when margins shrink during tough times and thrive when oil prices ride higher.

Gold prices have been on a tear this year and our investment team predicts that the “yellow metal” will continue its ascent in 2021. My preferred way to profit from increases in gold prices is through small-cap miners that can put operating leverage to work.

Our team has just pinpointed a gold mining stock that’s poised for exponential gains. If you act now, this tiny $9 company could hand you 20 times your money. For details on this under-the-radar gold stock, click here.