Welcome to my video presentation for Monday, January 11. Last week, a Trump-incited insurrectionist mob ransacked the halls of Congress, a shocking spectacle that caused many financial and corporate leaders to finally break with the president.

In my video, I offer personal perspective (from my previous experience as a congressional staffer) about last week’s mayhem. I also explain the distinction between value plays and value traps, and why investors shouldn’t try to “catch a falling knife.” And finally, I reveal how the results of the January 5 Senate run-off races in Georgia have spawned a once-in-a-lifetime investment opportunity.

Despite MAGA riots in Washington, DC that left five people dead and calls for the immediate removal of Donald Trump, stock markets witnessed a strong start to the year. Major indices in the U.S. and overseas last week reached all-time highs.

Investors are looking ahead to better days, with optimism fueled by the roll-out of vaccines and the inauguration of a new U.S. president. Small-cap and international stocks outperformed.

Fourth-quarter 2020 corporate earnings season gets underway in earnest this week, with the big banks kicking off the early results. The analyst consensus calls for an average Q4 earnings decline for the S&P 500 of 8.8% year-over-year, but Wall Street already is looking toward a more profitable 2021. 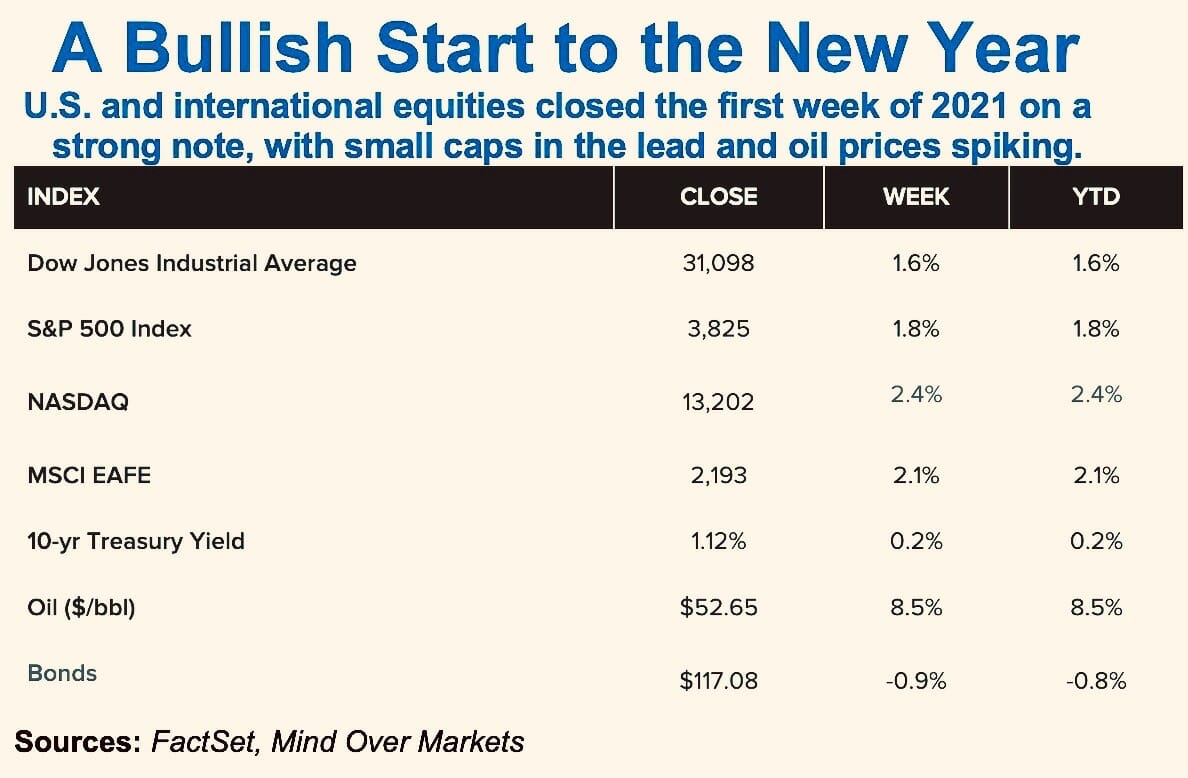 Stock futures were lower Monday morning in pre-market trading, as investors tried to digest the continuing upheaval in Washington.

Recent events in the nation’s capital have been unsettling, but I’m bullish about investment prospects for this year. If long-term political history is any guide, the stock market rally should continue. Generally, the stock market has performed well in the year after a presidential election, posting an average total return of 10.2%.

That said, stocks are getting pricey and the coronavirus pandemic isn’t behind us. Headline risk is persistent and we’ll probably experience a few sell-offs along the way.

During these sell-offs, should you buy on the dips? Yes, but you must be highly selective. Avoid the “Fear Of Missing Out” syndrome. Certain sectors (e.g., energy) are undervalued and poised to thrive in the coming months as the overall economic recovery gets stronger. But other sectors remain dangerous. Some industries will take a long time to get back on their feet and you should be wary of them. Sometimes a stock is cheap for logical reasons, not undue pessimism.

There’s a Wall Street saying: never try to catch a falling knife. A falling investment could rebound. Or it could lose more value. Trying to predict the bottom is like grabbing a knife on its way down. Pain usually ensues. When it comes to the economy right now, there’s still plenty of pain to go around.

The Labor Department on Friday released a disappointing employment report that showed a loss of 140,000 jobs in December instead of the expected gain of 50,000. This marked the first time employment growth has been negative since April, a sign that the recent resurgence of the coronavirus is undermining the economic recovery.

ADP reported on Wednesday that private payrolls declined by 123,000 jobs in December compared to the consensus estimate for a gain of 60,000. The drop reversed seven consecutive months of growth (see chart). 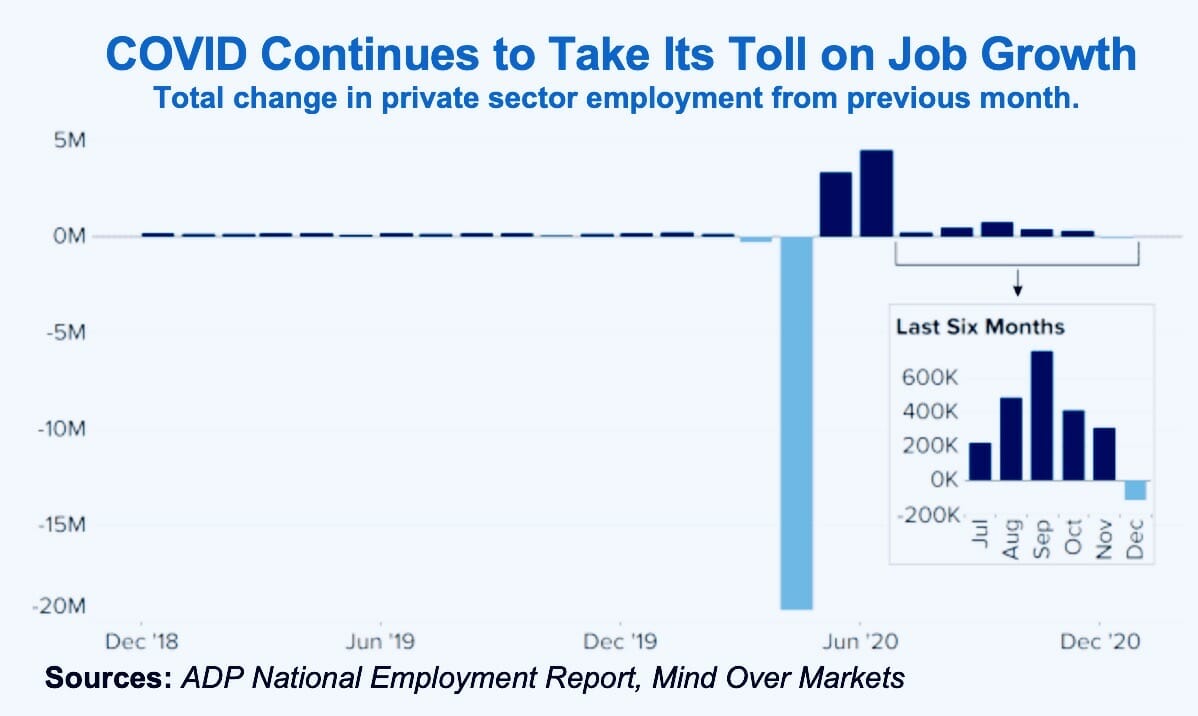 According to ADP estimates, companies laid off a net 19.4 million workers in April and have since recovered 9.9 million. Tourism, leisure and hospitality companies have suffered the worst job losses.

I’ve recently written about the economic winners of the pandemic. They include Big Tech, e-commerce and digital multimedia.

Read This Story: Digital Multimedia: The Channel for Profits

However, some industries will take a long time to bounce back and it would be a mistake to seek value plays among them. Companies involved in tourism, leisure and hospitality are the worst long-term victims. They serve as a cautionary case study. 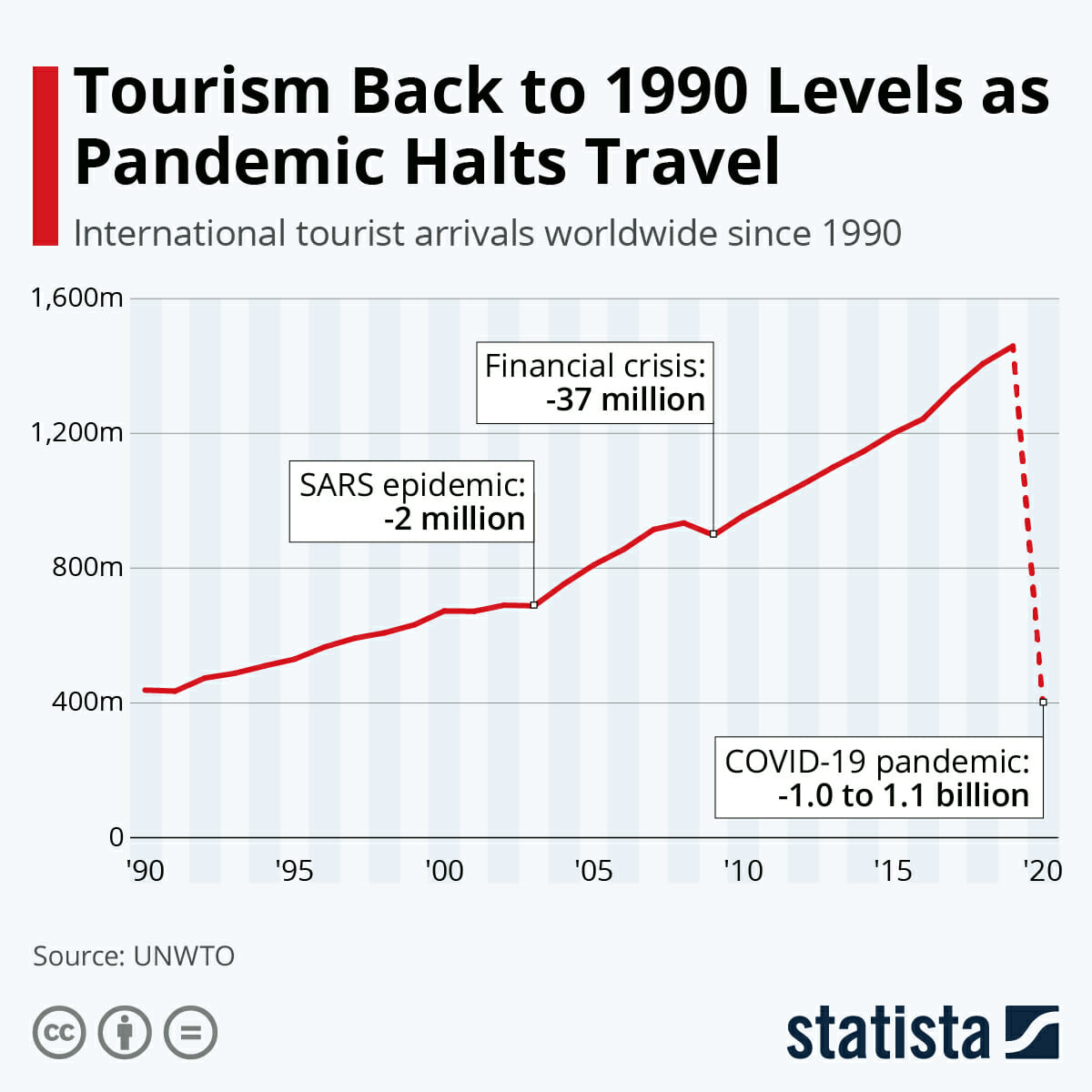 According to the UNWTO’s estimates, it will take the industry between 2.5 and 4 years to return to pre-pandemic levels of international tourist arrivals.

Tourism, leisure and hospitality stocks have been clobbered during the pandemic, although vaccine optimism has recently lifted them from their lows. The benchmark Invesco Dynamic Leisure and Entertainment ETF (PEJ) has fallen 7.62% over the past 12 months, compared to a gain of 17.58% for the SPDR S&P 500 ETF Trust (SPY) over the same time frame, as of market close January 8.

Some analysts are recommending that investors go bargain hunting among beaten-down tourism, leisure and hospitality stocks. But I’d stay away. The risks haven’t abated, not by a long shot. As I explain below, there are much better places to put your money.

Marijuana: on a political high…

House-passed legislation to decriminalize cannabis on the federal level currently sits in the Senate. The Democrats captured both of Georgia’s Senate seats in last week’s run-off elections, giving them control of the Senate.

With Democrats poised to rule the White House and both chambers of Congress, we could be one Senate vote away from full federal decriminalization of marijuana. President-elect Joe Biden has indicated that he would sign the bill, called the Marijuana Opportunity Reinvestment and Expungement (MORE) Act. It’s important to note that Vice President-elect Kamala Harris was a chief sponsor of MORE when she served in the Senate.

The federal decriminalization of cannabis would be an historic event and a “profit catalyst” that sends marijuana stocks soaring. In all my many years of covering politics and finance, I’ve rarely seen a more exciting investment opportunity.

Our team of analysts just uncovered a well-positioned pot company that would skyrocket after the Senate vote occurs. The time to buy the company’s stock is now, ahead of the news. Click here for details.