What to Look For in a Pot Stock

Even Donald Trump has done his part to help the marijuana industry. This past week, in one of his final acts in office, Trump granted pardons and commutations to dozens of people with marijuana and drug convictions.

Maybe as a private citizen, ex-president Trump will turn to cannabis to help cope with those lonely nights at Mar-a-Lago. Regardless, under the Biden administration, marijuana will continue to enjoy tremendous tailwinds.

In December 2020, the U.S. House of Representatives approved H.R. 3884, the Marijuana Opportunity Reinvestment and Expungement Act of 2019 (MORE Act), which is now pending before the Senate.

Among other things, the MORE Act would remove marijuana from the schedules of controlled substances under the Controlled Substances Act, legalizing many marijuana-related activities at the federal level. The House vote was an historic first.

With Democrats now in control of the White House and both chambers of Congress, passage of MORE is nearly assured. Marijuana already is Big Business and MORE would give the industry (and marijuana equities) a jolt of adrenaline. But you need to be selective in your marijuana investments. Below, I show you how to find the right pot stock.

According to marijuana research firm New Frontier Data, the legal cannabis market was worth an estimated $13.2 billion in 2019 and it’s expected to reach $20.1 billion in annual sales for 2020. Fueled by strong consumer demand, annual legal sales are projected to grow at a compound annual growth rate (CAGR) of 21%, to reach more than $41 billion by 2025. 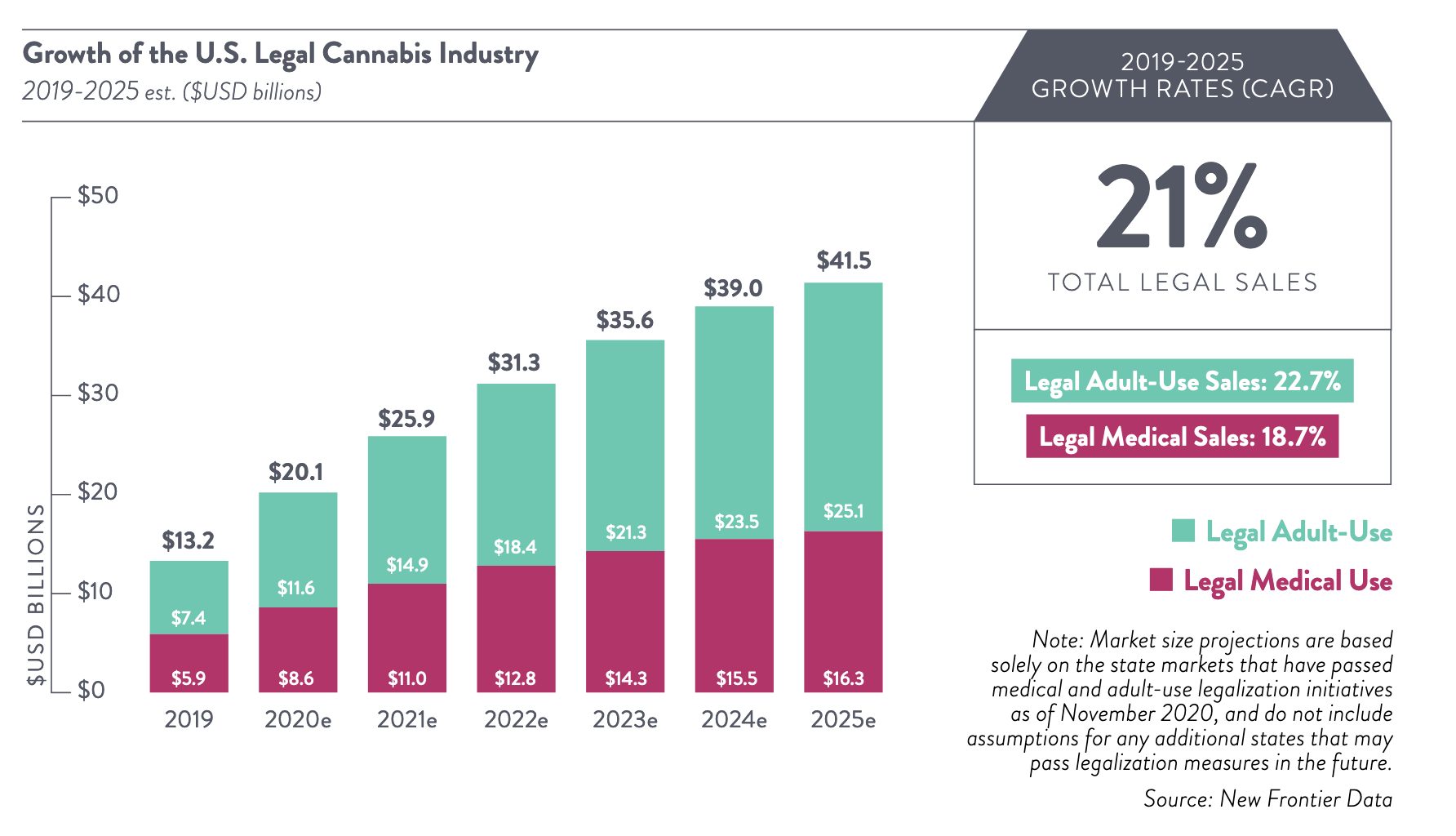 Instead of harming marijuana sales, the coronavirus pandemic has fueled them as quarantined consumers hoard pot.

Read This Story: Get Ready for The Green Revolution

The November 3 general election resulted in the passage of several state initiatives to legalize marijuana. What’s more, the new Biden administration is avowedly in favor of marijuana legalization.

President Joe Biden has indicated that he would sign MORE if it reaches his desk. It doesn’t hurt that Vice President Kamala Harris was the chief sponsor of MORE when she served in the Senate.

The right way to invest in cannabis…

What are the characteristics of an investment-worthy marijuana stock? The company must have strong fundamentals and quality management. Look for a solid balance sheet, growing earnings and revenue, and a competitive edge against industry rivals. A common red flag is excessive debt, without sufficient revenue to cover liabilities.

Avoid companies that provide the marijuana plant as just a commodity. Growing a marijuana plant isn’t a unique capability. Marijuana firms involved in tasks that are easily replicated will suffer from “commoditization” and a downward pressure on prices.

Insider ownership is always a plus; it shows that management has “skin in the game,” which lessens the chance of financial gimmickry. The company’s niche should be rapidly expanding and its products and/or services distinctive.

Particularly promising are biotech companies developing medical treatments based on cannabis compounds. In fact, our investment team just uncovered an obscure biotech cannabis company that’s on track to become the “Pfizer of Pot.”

This marijuana biotech is developing breakthrough technologies that would allow the mass-production of 100% pure tetrahydrocannabinol (THC) and cannabidiol (CBD) compounds without growing a single leaf of marijuana.

But more than THC and CBD are involved. This company’s proprietary technologies also could extract, stabilize, and reproduce other marijuana compounds that have even further therapeutic effects, at a fraction of the cost of growing the plants.

This innovative company is one of the biggest investment opportunities you can find, in any sector. The time to buy shares is now, before Wall Street catches on and jacks up the price. Click here for details.