Get Ready for The Green Revolution

John Lennon, who was frequently busted for marijuana possession, sang a song that could be applied to the current coronavirus crisis:

People stressed out by COVID-19 are increasingly turning to weed, to get them through the night. That’s great news for marijuana investors.

The coronavirus pandemic is causing social and economic upheaval, but it’s also fueling fast growth in the marijuana sector. Quarantines are driving consumers to hoard and use pot, for recreational and medical purposes.

Most of us are saying “good riddance” to 2020 and with ample justification. It was an anxious year, bedeviled by a deadly pandemic and bitter partisan division. However, it was a favorable time for the marijuana industry. The table was set last year for a burst of growth in cannabis investments in 2021, as America stands on the verge of a revolution in federal laws governing marijuana.

After imposing lockdowns on most types of businesses, many states deemed pot producers and dispensaries as “essential services.” The top and bottom lines of pot companies soared during the pandemic, helping marijuana equities recover from the correction of late 2019.

In the November 3 general election, the Democrats won the White House. On January 5, the party won twin Senate run-offs in Georgia, to capture an (albeit slim) Senate majority for the first time in a decade.

Vice President-elect Kamala Harris is the Senate’s chief sponsor of the Marijuana Opportunity Reinvestment and Expungement Act of 2019, aka the MORE Act, which passed the House last month and now awaits action in the Senate. Harris has vowed to push for passage of MORE and President-elect Joe Biden is likely to sign it. In addition, Biden’s choice for U.S. attorney general, Merrick Garland, is seen as “marijuana friendly,” as opposed to his socially conservative predecessor William Barr.

The Democrats will make passage of MORE a top priority in 2021. Republicans are less enthusiastic about marijuana reform, but they can read the polls. A recent Gallup poll found that 68% of Americans, including half of Republicans, support the full legalization of marijuana, the highest support on record.

On the state level on November 3, Arizona, Montana, New Jersey and South Dakota passed adult-use measures, with South Dakota simultaneously approving a medical program. Even red states are embracing the “green rush.” Notably, Oklahoma now features the country’s biggest medical cannabis market on a per capita basis. Since 2018, nearly 10% of the Sooner State’s population have obtained patient cards since 2018.

According to analysis released January 11 by New Frontier Data, a leading marijuana research firm, growth in average per capita consumption of marijuana, together with the expansion of key adult-use markets, will propel total legal cannabis sales to $25.9 billion for calendar year 2021. California, Colorado, Florida, and Illinois, respectively, are projected to lead the industry as the four largest legal state markets (see chart). 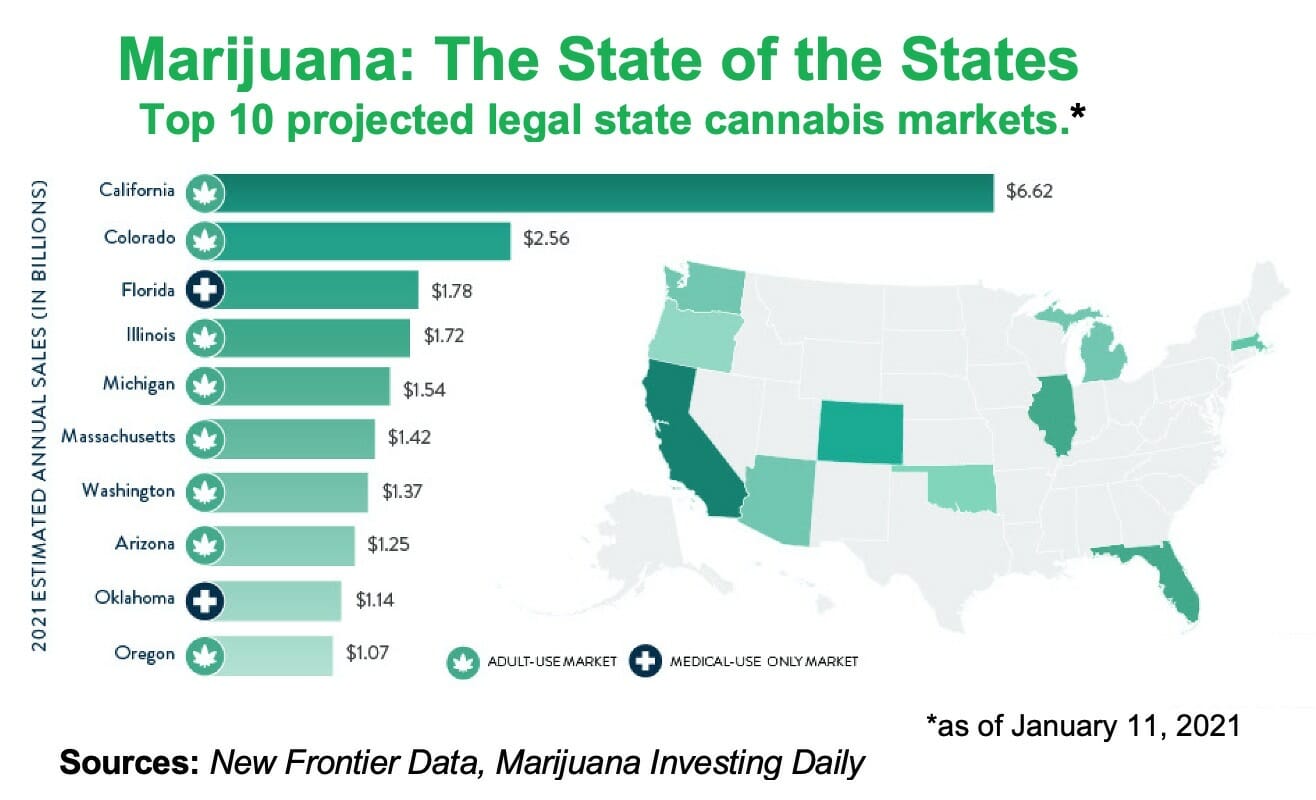 New Frontier asserts that the year 2021 will be highly prosperous for marijuana companies and their investors:

“The positive market signals in the aftermath [of the November 3 elections] look to support a strong influx of capital investment into the cannabis sector, and provide catalysts for increased merger and acquisition activity over the next 12 months.

Investors are looking at profitability and stable balance sheets. In turn, impacts from accelerating consolidation should fuel a further rise of strategically positioned multistate operators and increase confidence and public market activity.

With the likelihood for federal reform and continued state market growth, the industry is expected to see its best year for new capital investment in the space since 2017, with investors bullish on both domestic and international growth opportunities. Investments in multistate operators, and into companies with strong differential or competitive advantages, will make it more challenging for smaller, undifferentiated companies to compete.”

It’s clear that trends are continuing to shift in favor of the marijuana industry. A seismic event was passage in the House last month (with overwhelming bipartisan support) of the MORE Act.

MORE this year faces excellent odds of passage in a Senate that will be run by Sen. Chuck Schumer (D-NY), who strongly favors marijuana decriminalization. Joe Biden and Kamala Harris are on board, too.

Our team of analysts just uncovered a well-positioned pot company that would skyrocket after the Senate vote occurs. The time to buy this weed stock is now, ahead of the news. Want to join the green revolution? Click here for details.