The FDA Gives CBD a Boost

Whenever my mother buys birthday gifts for my wife, it’s usually feminine items such as perfume or cosmetics. But this time around, mom surprised us by bestowing a gift set of CBD (cannabidiol) beauty products.

As an investment analyst, I view my mother’s gift choice as an economic indicator. My elderly mom is a late adopter of consumer trends. Her idea of a swell time is to re-read Marcel Proust novels. If she’s aware of CBD and regards the marijuana-derived compound as just another gift item for her daughter-in-law…well, that means CBD has arrived.

If you’re looking to target a promising sub-sector of the cannabis industry, consider companies involved with producing and marketing CBD. The compound is becoming a familiar household item and regulatory trends are paving the way for its widespread acceptance.

Below, I’ll highlight a a major positive development that occurred this month for CBD, thanks to the U.S. Food and Drug Administration (FDA).

CBD accounts for up to 40% of the cannabis plant’s extract. Unlike its cousin THC, CBD doesn’t give users a buzz. Sales of CBD are fueled by claims (admittedly, some of them exaggerated) that it can reap a bevy of benefits, such as reducing pain, calming anxiety, and enhancing mental focus. This past holiday shopping season, we witnessed a surge of consumer interest in CBD.

Read This Story: Tis The Season…for Edibles and CBD

According to marijuana research firm New Frontier Data, annual spending on CBD in the U.S. is estimated to have reached $14.86 billion in 2020 (mid-range estimate). See the following chart: 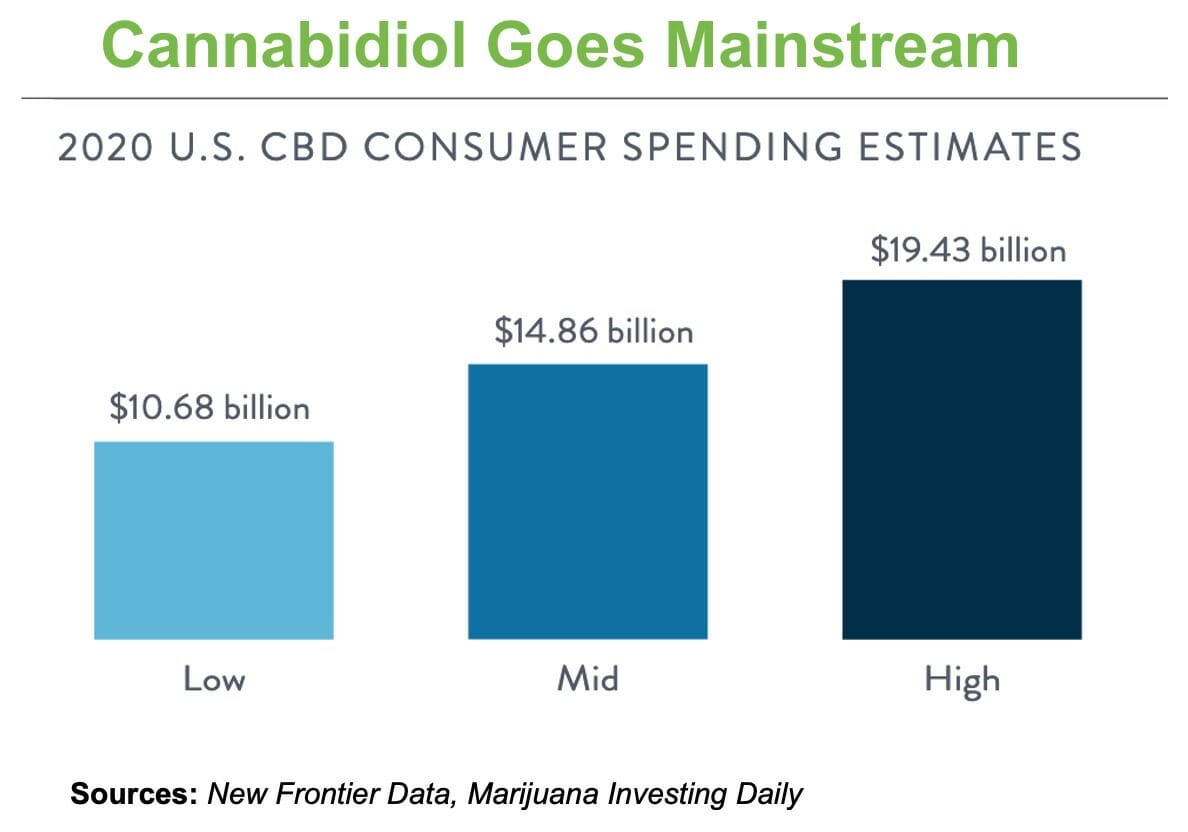 According to a recent report from New Frontier:

“While a variety of factors will determine the future shape and dynamics of the CBD market in the U.S., it is clear that consumer demand is established and durable. As access to CBD continues to increase, so will demand, and as product offerings expand, consumers’ preferences and behaviors will evolve, becoming increasingly personalized to their unique needs.

The FDA has been slow to regulate CBD, but the market is maturing, with consumers’ preferences and behaviors developing in the meantime. Nearly one in five (18%) Americans surveyed reported consuming CBD; of those who have done so, more than three-quarters (77%) purchased it.”

Major consumer brand companies involved in food, cosmetics and beverages are poised to invade the CBD segment, but many are waiting for FDA regulations to become clearer. The implementation of streamlined rules governing CBD is increasingly likely, now that cannabis-friendly Democrats control the regulatory apparatus in Washington.

Once FDA guidance is unambiguous, global consumer giants will move quickly. I expect a wave of mergers and acquisitions among CBD companies in 2021, as they seek widespread manufacturing and marketing channels and economies of scale.

Cannabis derivatives such as hemp and CBD were federally legalized under the 2018 Farm Bill. Accordingly, the FDA has been developing regulations for products containing these substances, but the agency has been moving slowly.

Until now. In January 2021, the FDA announced it will take measures in the coming months to conduct in-depth research about the safety and efficacy of CBD, to forge a simpler and uniform regulatory structure for the compound.

In its announcement on CBD this month, the agency noted the “rapid increase in the interest and availability” of CBD, but pointed out:

“We still have a limited understanding of the safety profile of CBD and many other cannabis-derived compounds, including potential safety risks for people and animals…we see an important public health opportunity in using novel sources of data and rigorous analytical methods to build a more robust base of scientific evidence on the safety profile and use of CBD products.”

The FDA’s action should open the floodgates for mainstream companies to incorporate CBD into their product lines. As household consumer names embrace CBD, the compound will gain greater interest and acceptance among consumers.

In a year that was generally favorable to the marijuana industry as a whole, CBD was a standout winner in 2020. This year, CBD will increasingly migrate into a variety of consumer product categories including food and beverages, pharmaceuticals, health, wellness, and beauty aids. Welcome to “The Next Big Thing” for marijuana investors.

Editor’s Note: As I’ve just made clear, cannabis investments confer market-beating potential and they’re a must for your portfolio. But the key is finding the right pot stocks. You need to conduct due diligence.