In Search of the Next GameStop

Like many of you, I have been watching the GameStop (NYSE: GME) story play out with equal parts fascination and fear. I am fascinated by the meteoric rise of a stock that, at least on paper, appears to be worth almost nothing. For that reason, I fear that investors that got in late will end up losing a lot of money.

We may already have seen the high point in GameStop’s share price arc. A week ago, it traded up to $480. Then, severe trading restrictions imposed by brokers sent the stock into a swift and steep slide. Three days later, it traded down to $75. 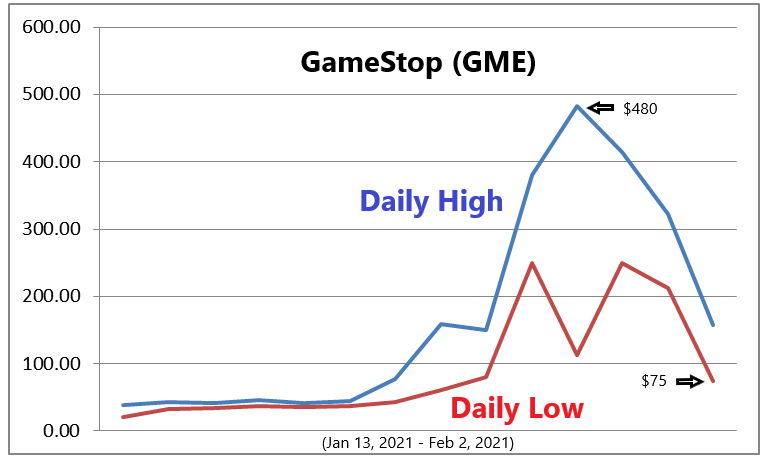 During the two days in between, more than 86 million shares traded hands. That means a lot of people are losing a lot of money on GameStop. Based on comments posted by some of those shareholders online, they claim not to care about that. In their eyes, it is the defiant message they are sending to Wall Street that matters most of all.

That’s an easy claim to make when the share price is going up. There is no better feeling as an investor than being both virtuous and wealthy. But they may feel differently when it becomes apparent that their financial loss is permanent while the lesson they taught Wall Street is ephemeral.

Already, attention is turning to other stocks that might be suitable for a similar blitzkrieg. The search formula is simple: Find a small-cap stock with high short interest and low trading volume. There are dozens of companies that meet those criteria.

Read This Story: The Reddit Rebels Take a Shine to Silver

One of the stocks being floated as a possible short squeeze candidate is snack food purveyor Hostess Brands (NSDQ: TWNK). It meets all of the requirements with a market cap of $1.9 billion, a short ratio of 15%, and an average daily trading volume of 1.5 million shares.

Last Friday, somebody was buying a lot of TWNK. Trading volume that day exceeded 10 million shares. TWNK spiked more than 7% despite no news out of the company to explain the big move. 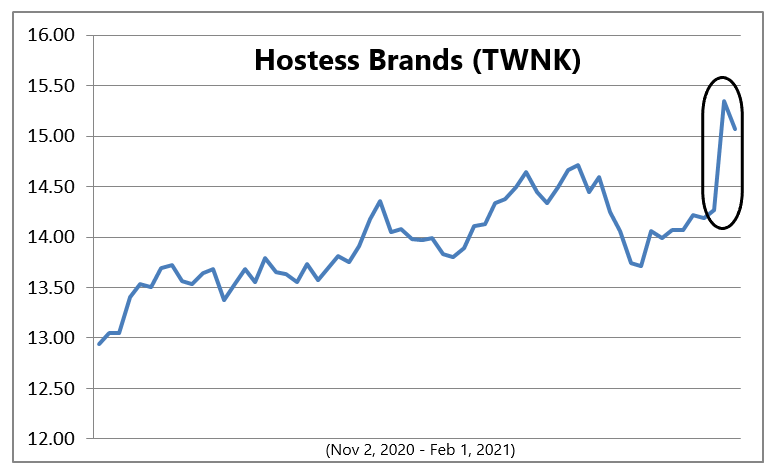 It may have been speculators guessing which company might be the next short squeeze target. If so, I don’t think they can do to TWNK what was accomplished with GME. The two stocks are similar in size. However, it would take a lot more money to drive up the price of TWNK to the point of inducing a short squeeze.

The short ratio for GME was more than 100% of its outstanding shares and more than 200% of the float (unrestricted shares). For that reason, it did not take much buying power to induce a short squeeze.

A month ago, I recommended buying a put option on TWNK in my Mayhem Trader options trading service (a put option increases in value when the price of the underlying security goes down). I reckoned that Q4 results for Hostess would come in beneath expectations when they are released in a few weeks.

I still believe that will be the case, so I am not overly concerned that TWNK might shoot up in value due to a short squeeze in the meantime. In the long run, the company’s financial performance should dictate which direction its share price will go.

However, that is not always the case in the near term. For that reason, shorting a stock carries a lot more risk than does buying a put option. If I’m wrong, the most money I can lose is what I paid for the option. But if a short seller is wrong, there is no limit on the cost of closing out that position by buying the stock back.

When it comes to trading options, my colleague Jim Fink is one of the best in the field.

Jim Fink, the chief investment strategist of Velocity Trader, is a world-renowned options trader. Jim has devised a proprietary options trading strategy that racks up profits regardless of the pandemic, stock market gyrations, or political turmoil.