Just Ahead: An Epic Jobs Boom

Well, not quite yet. But for the economy and investors, events are increasingly fortuitous.

Democrats have signaled that they’ll move forward with President Biden’s proposed $1.9 trillion stimulus package with or without Republican support. If the GOP balks at the size of the bill, the Democrats will use an arcane legislative procedure known as “reconciliation” that would only require a majority vote, rather than the 60-vote supermajority mandated under filibuster rules.

This new spending would give the economy and stock markets a shot of adrenaline and fuel a nationwide hiring spree. The individual stimulus checks in the relief bill would prompt a burst of consumer spending, whereas provisions for state and local aid would boost public sector expenditures.

In addition to COVID-19 relief spending, the Biden administration also promises massive spending on infrastructure. America’s need to upgrade its crumbling infrastructure is real and requires urgent attention. Meanwhile, demand for housing remains robust and manufacturing activity is picking up.

For all these reasons, optimism continues to reign on Wall Street. The S&P 500 rose on Wednesday, climbing for a third straight day as investors digested a slew of better-than-expected corporate earnings. The broad equity benchmark climbed 0.1%, the Dow Jones Industrial Average also gained 0.1%, and the tech-heavy NASDAQ Composite dipped less than 0.1%. In pre-market futures trading Thursday, all three indices were in the green. 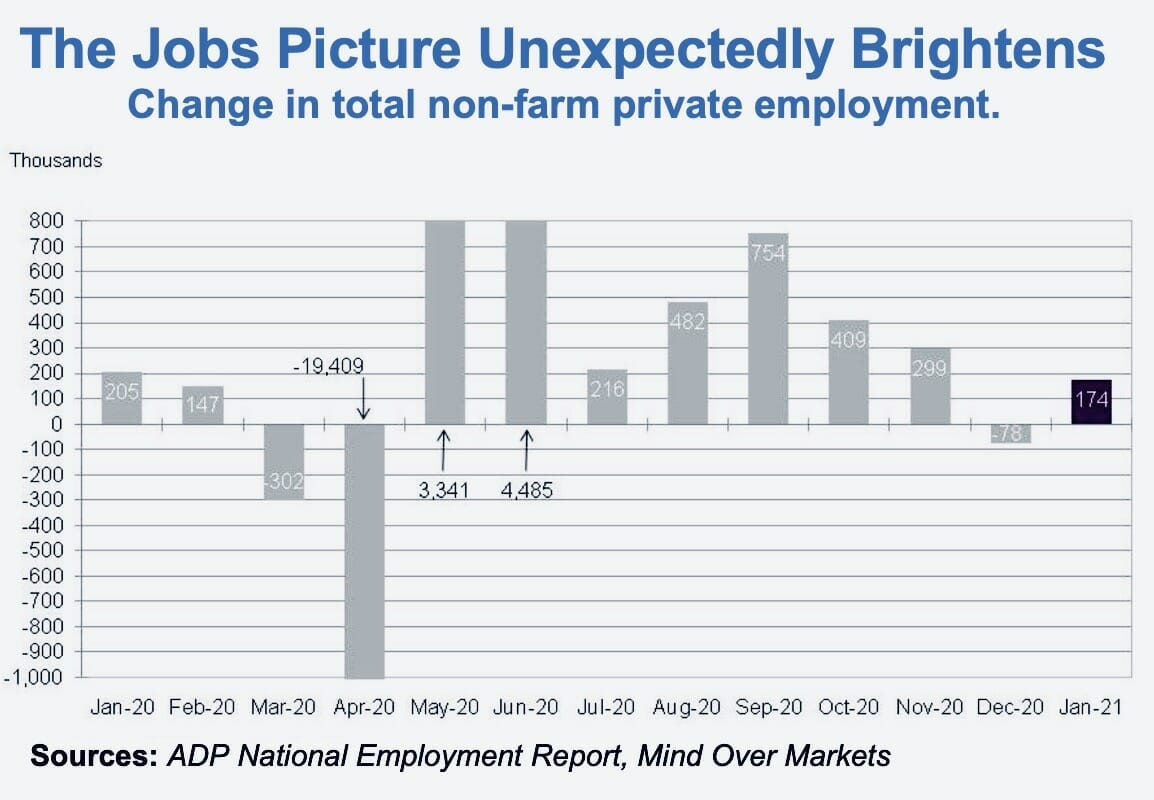 By sector, the vast majority of jobs (156,000) created in January were in the services sector, especially health care.

ADP’s overall employment numbers for January far exceeded the consensus forecast of 49,000 new jobs. Wednesday’s strong ADP report came as a surprise, because January was the worst month of the coronavirus pandemic since it started in the U.S., according to data from Johns Hopkins University.

Employment growth is improving largely because many states have started to lift business restrictions, as vaccines are increasingly administered. However, that strategy poses a risk to public health as well as the stock market. Easing up on quarantines could backfire and trigger an increase in COVID-19 cases, in turn causing a return to widespread lockdowns.

Read This Story: The Economic Glass: Half Full or Half Empty?

Nonetheless, the trifecta of fiscal stimulus, low interest rates, and vaccinations should boost jobs growth for 2021. According to data firm IHS Markit, U.S. nonfarm payrolls are projected to increase by 6.7 million by December 2021 (from December 2020). That would represent the highest rate of annual jobs growth since such records began in 1939, when FDR was in the White House.

During the COVID-19 outbreak, employers and businesses put aside a lot of cash as a precaution. Across the economy, pent-up demand right now is like a coiled spring ready to pop.

To shore up the pandemic-battered economy, the Federal Reserve has vowed to keep interest rates at historically low levels. Accordingly, income investors face a challenging yield environment in 2021. Low rates keep a lid on bond yields.

If you’re an income-oriented investor, you may need to shoulder additional risk in return for more yield. That’s why you should consider dividend-paying stocks.

With bond yields at low levels, the healthy yields of dividend-paying stocks offer attractive alternatives to bonds for conservative, income investors. When choosing dividend stocks, a major criterion that I look for is revenue reliability.

Have the stock’s revenue and dividends held up well during past downturns, such as the one we experienced in February-March 2020? If so, that’s a pretty good reason to be confident of their durability in future market storms.

I’m especially keen on regulated, U.S.-based utilities stocks, which are excellent proxies for dividend growth. Utilities also should benefit from the White House’s “Build Back Better Recovery Plan,” especially in regard to clean energy initiatives. For our list of utilities stocks that are poised to thrive under the new Biden administration, click here now.