Marijuana Investing Daily is your guide to understanding and profiting from broad trends that are driving the marijuana industry. I provide context and interpretive analysis.

Accordingly, I’m not necessarily recommending that you buy the stocks I’m about to mention in this article. However, I cite them as indicative of a trend that’s sweeping the marijuana sector, namely consolidation via mergers and acquisitions (M&As).

As the following events demonstrate, a shrewd strategy is to pinpoint companies likely to embark in M&A activity and invest in them before the news becomes official, to profit from their future momentum. Remember this time-tested Wall Street adage: Buy on the rumor, sell on the news.

A merger bid and all that Jazz…

The marijuana industry is in the throes of a “green rush” that richly rewards proactive investors who get into position ahead of the herd. Which brings me to GW Pharmaceuticals (NSDQ: GWPH).

GW Pharmaceuticals’ share price soared 44.53% Wednesday to a record high, when news broke that Jazz Pharmaceuticals (NSDQ: JAZZ) agreed to buy GWPH for $7.2 billion. The proposed deal places a healthy premium on GWPH stock and diminishes the likelihood of other suitors.

The merger is expected to close in the second quarter. Based in Ireland, Jazz (market cap: $8.4 billion) focuses on neuroscience, which makes GWPH a perfect fit for the acquirer.

With a market valuation of $6.2 billion, GW Pharmaceuticals is one of the few “weed companies” that isn’t a micro-cap, penny stock.

GWPH and Jazz are overseas companies. Nonetheless, U.S.-based cannabis companies accounted for over 90% of M&A consideration in the second half of 2020. If you’re looking for the greatest number of M&A opportunities, look to America (see the following chart). 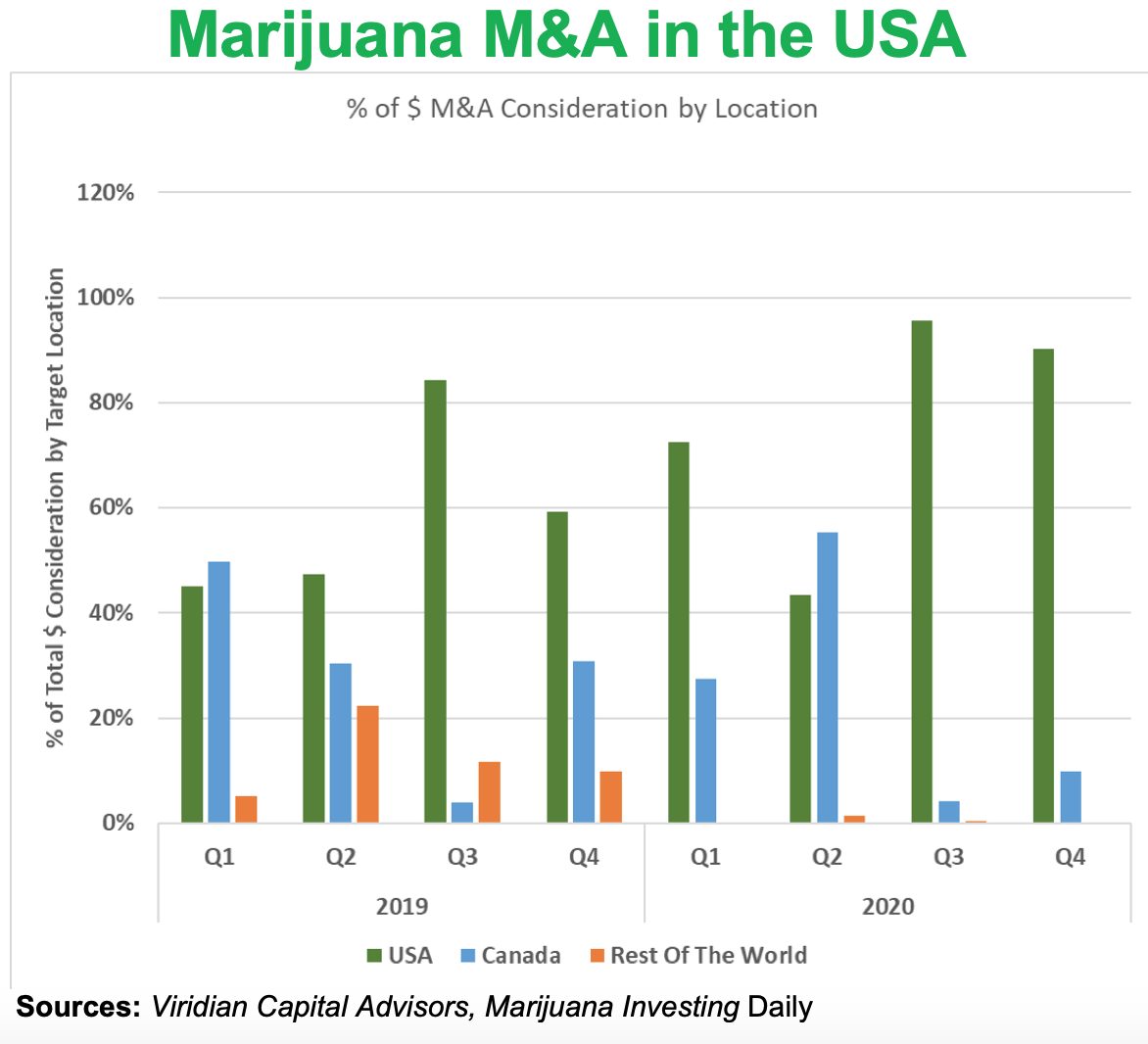 GW Pharmaceuticals also offers Epidiolex, which treats rare and resistant forms of pediatric epilepsy. The company has been marketing the breakthrough drug in more than 20 countries outside of the U.S., through partnerships with Big Pharma.

Epidiolex received the stamp of approval from the U.S. Food and Drug Administration in June 2018. Now that it’s available in both the U.S and overseas, this drug is a potential blockbuster.

GWPH has other patented products in the pipeline, including therapies for glaucoma and schizophrenia, and a potential treatment for a particularly aggressive form of brain cancer.

Before GWPH came along, a diagnosis for some of these diseases, such as brain cancer, was tantamount to a death sentence. But thanks to GWPH’s cannabis-based treatments and pioneering research, these patients are getting a second lease on life.

Under the terms of the merger deal, Jazz Pharmaceuticals will pay $220 per American Depositary Share (ADS). That’s split in $200 per ADS in cash and $20 in Jazz ordinary shares. The entire deal values GWPH stock at $7.2 billion, or $6.7 billion net of GW Pharmaceuticals’ cash.

The imminent legalization of marijuana on the federal level in the U.S. is adding impetus to cannabis deal-making.

The likely scenario is the Senate will refine the House-passed bill, the Marijuana Opportunity Reinvestment and Expungement Act of 2019 (aka the MORE Act). Among other things, MORE would decriminalize marijuana on the federal level, which would be a momentous “profit catalyst” for marijuana stocks.

In the meantime, our investment team is keeping a close eye on new opportunities in the thriving marijuana sector. We’ve pinpointed cannabis plays that could be the next GW Pharmaceuticals. If you’re looking for a future cannabis windfall of your own, click here for details.