Sure, an increasing number of states are lifting restrictions against marijuana. But until the federal ban is repealed, the true growth potential of the marijuana industry will remain stymied.

However, as I explain below, Congress is about to take action with new legislation that could send marijuana investments soaring.

On February 5, the Congressional Research Service released a new report, “The Controlled Substances Act (CSA): A Legal Overview for the 117th Congress,” which highlighted what it called “the marijuana policy gap.”

First, a quick backgrounder. Drugs, substances, and certain chemicals used to make drugs are classified by the U.S. Drug Enforcement Administration into five distinct schedules (i.e., categories) depending on the drug’s acceptable medical use and the drug’s abuse or dependency potential.

Schedule I drugs have no currently accepted medical use and aren’t considered safe to use even under medical supervision. They’re considered to have a dangerous potential for abuse and dependency. Marijuana falls into Schedule I, under the CSA.

The CSA was passed in 1970, at a time when the widespread rebellion of the counter-culture prompted the Nixon White House to launch a “War on Drugs.” (This war was actually Nixon’s way to target minorities and the political left, but that’s another topic for another day.)

So far, the federal response to state actions to decriminalize or legalize marijuana largely has been to allow states to implement their own laws on marijuana.

The Congressional Research Service periodically provides to Congress a legal overview of the CSA. The most recent report was released last week and the dangers of the marijuana policy gap were prominently featured.

This policy gap is the increasing divergence between federal and state laws in the area of marijuana regulation. The report warned that citizens and marijuana companies would continue to suffer the adverse consequences of this gap unless Congress took action.

As of this writing, 15 states and the District of Columbia have enacted laws lifting state prohibitions on medical and recreational marijuana use by adults age 21 or older. An additional 33 states have enacted laws permitting medical use of marijuana or the marijuana-derived compound cannabidiol (CBD). However, under federal law, marijuana remains a Schedule I controlled substance. State laws that legalize cannabis have zero effect on that federal status.

The ramifications of the federal ban go beyond criminal prosecution. Even if authorized under state law, cannabis businesses may be unable to access banking services due to federal anti-money laundering laws. In addition, those businesses may be ineligible for certain federal tax deductions. Income from cannabis may also prevent a bankruptcy court from approving a bankruptcy plan.

For individuals, participation in the cannabis industry may bring unwanted attention from immigration officials. Drug use or convictions may impede eligibility for federal student financial aid and other benefits.

Federal law also prohibits the possession of firearms or ammunition by any person who is “an unlawful user of or addicted to any controlled substance.” What’s more, individuals who partake of marijuana, even for medical purposes, enjoy little or no legal protection from adverse actions by their employers.

Congress steps into the breach…

Lawmakers in Washington know that marijuana legalization is popular, as well as profitable. They can read the polls.

“We are committed to working together to put forward and advance comprehensive cannabis reform legislation that will not only turn the page on this sad chapter in American history, but also undo the devastating consequences of these discriminatory policies. The Senate will make consideration of these reforms a priority.”

On February 6, Schumer held the group’s first meeting (see the following tweet posted by the Medical Marijuana Exchange, or MME, an online news site and directory). 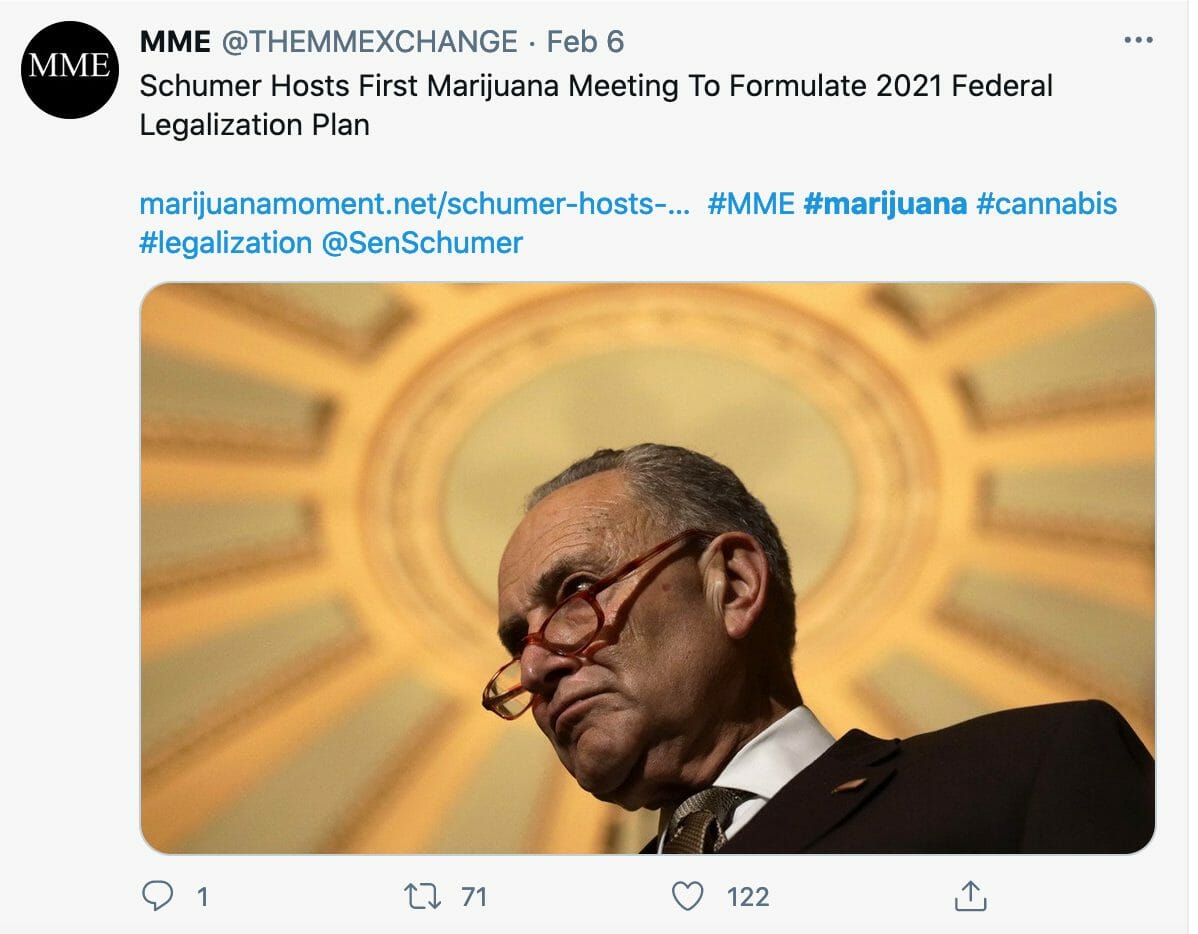 The Senate group is focusing on two major pieces of marijuana-related legislation.

In a watershed moment for marijuana legalization, the U.S. House last September passed the Secure and Fair Enforcement (SAFE) Banking Act, which is designed to protect banks that accept marijuana business clients from being penalized by federal regulators.

In a move of even greater importance, the House last December passed the Marijuana Opportunity Reinvestment and Expungement (MORE) Act. Among other things, MORE would decriminalize marijuana on the federal level.

Both bills now await action in the Democratic-controlled Senate, where their prospects are good. President Biden has indicated that he would sign these bills. If either or both of these bills get enacted into law, you can expect a surge in the share prices of pot stocks.

Looking for the best way to make money from the mainstreaming of marijuana? A small group of everyday Americans are earning up to $55,362 a year from one company’s unique marijuana profit-sharing “program.” To get in on the action, click here.