Welcome to my video presentation for today, in which I review the past week and analyze what it means for the days ahead. My article below provides greater details.

Over the holiday weekend, I witnessed certain pundits on cable television complain about how the Federal Reserve’s accommodative monetary policy amounts to “printing money,” which in turn will unleash damaging inflation. It’s a familiar argument and it’s intellectually lazy. You should never make investment decisions based on regurgitated talking points. Here are the facts.

The Federal Reserve doesn’t literally print money. The Fed can’t produce physical money in the form of coins or bills. That’s the job of the Bureau of Engraving and Printing (which is run by the U.S. Treasury) and the U.S. Mint.

The Fed expands (or contracts) the money supply by purchasing (or selling) U.S. Treasury securities and other financial instruments. The Fed pays for those securities by crediting funds to the reserves that banks are required to hold. The Fed prints money, so to speak, by adding reserves to the banking system. These additional reserves also enable banks to make more loans, which stimulates the economy.

Let’s be generous and assume these pundits use the term “printing money” as a metaphor. They’re still wrong about inflation. Price pressures aren’t likely to get out of control.

The major factor driving stocks to record highs has been massive fiscal and monetary stimulus, to combat pandemic-caused economic pain. The Fed’s balance sheet has expanded to more than $7.4 trillion as it buys everything from U.S. Treasurys to mortgage backed securities (see chart).

Will stimulus spawn inflation? A modest amount, yes. But as I explain below, inflation can be a good thing.

The trifecta of record highs… 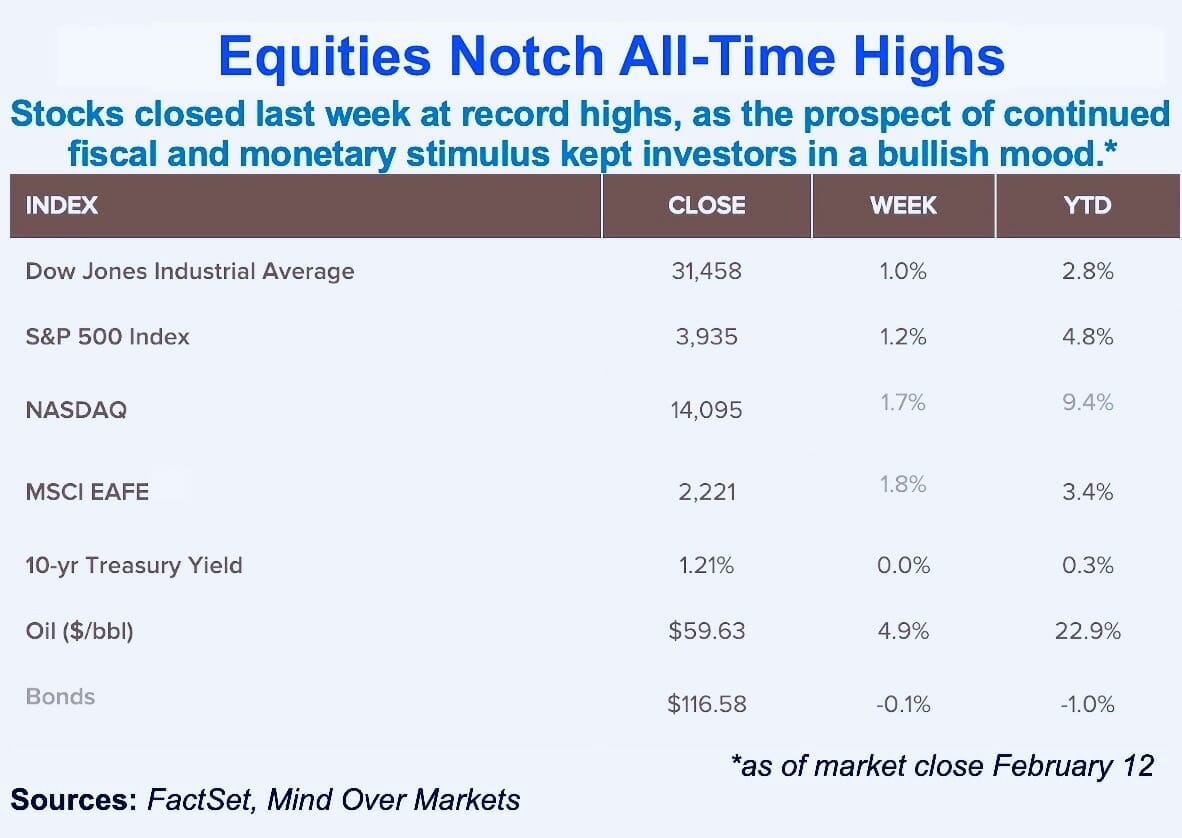 In pre-market futures contracts Tuesday morning, the three main U.S. stock indices were trading in the green, with the Dow Jones Industrial Average set to open more than 200 points higher.

The Fed recently adopted a policy that would allow inflation to run moderately above its previous goal of 2%. The Fed projects that core inflation, which excludes the costs of food and energy, will run at about 2.2% in 2021, up from 1.6% at the end of 2020.

Moderate inflation is beneficial when the economy is struggling to get out of a slump. A greater number of dollars creates more spending, which in turn creates more aggregate demand. Production rises to meet that demand, lifting corporate operating results.

Inflation also lessens the load on debtors, who repay their loans with money that is less valuable than the money they borrowed. This dynamic facilitates additional borrowing and lending, which boosts spending on all levels.

Runaway inflation is bad, of course, because it erodes investment gains and wipes out the purchasing power of private and public savings. However, despite the scaremongering from the pseudo-economists on the tube, there’s little chance we’ll see hyperinflation.

There’s still sufficient slack right now in the economy and jobs market to keep inflation at manageable levels. Also keep in mind, the base from which the annual growth rate of the consumer price index will be calculated is depressed because of COVID-induced economic harm.

Any surge of inflation this year must be kept in context and viewed as a temporary distortion. The Federal Reserve knows this, which means the central bank’s dovish stance will remain in place even if inflation temporarily heats up. If we see greater inflation in the near future, it’s by the Fed’s design.

In the holiday-shortened week ahead, keep an eye on economic data with the potential to move markets (see table). 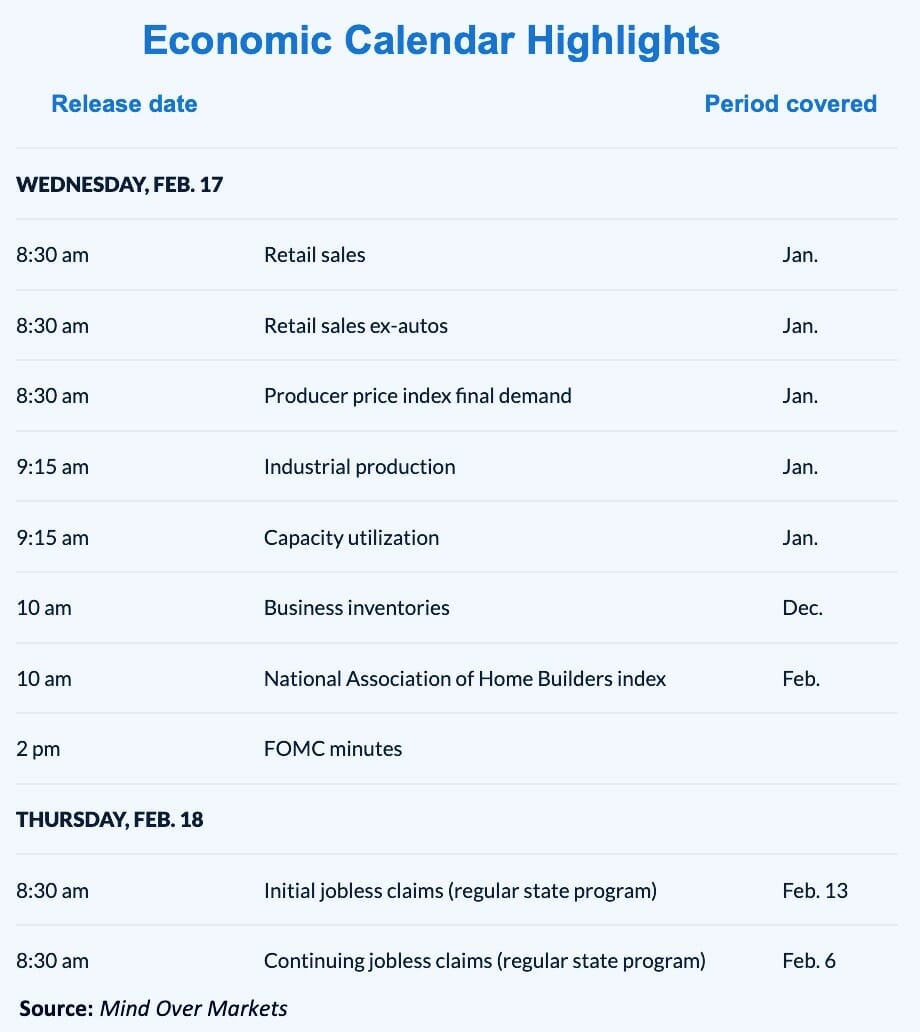 Particularly important will be retail sales data on Wednesday. Consumer spending has been surprisingly strong during the latter stages of the pandemic.

Retail sales are projected to grow by 8.1% in 2021, the fastest pace this century, to a record $4.3 trillion, according to a report published February 11. Consumer spending accounts for about 70% of U.S. gross domestic product, so Wednesday’s retail figure will loom large.

With Donald Trump’s second impeachment trial over, Congress will turn its attention to President Biden’s $1.9 trillion fiscal stimulus package. Despite the partisan divide, the bill has enough votes to pass by a simple majority, through a legislative process called reconciliation.

Biden’s proposal could rightfully be called “relief” rather than stimulus. The income replacement in the form of individual checks and aid to small businesses is less inflationary that other types of federal stimulus, such as spending on public works projects.

How should you trade under the conditions that I’ve just described? Cyclical sectors tend to outperform when inflation is rising, while defensive sectors lag. You should increase your exposure to such economically sensitive sectors as industrials, materials, and energy. When inflation picks up, gold also shines as an investment.

With these trends in mind, our investment team has put together a new special report: “5 Red Hot Stocks to Own in 2021.” As the economic recovery strengthens, these growth stocks should outpace the broader market this year and beyond. For your copy of our report, click here.