From Worst to First: Energy Bounces Back

When pressed by a young investor in 1924 as to how Standard Oil stocks would do, John D. Rockefeller pondered a while and finally said: “Young man, I think they will fluctuate.”

Energy stocks certainly have fluctuated over the past several months, subjecting investors to wild roller-coaster rides. But now, to the surprise of many analysts, the sector has embarked on a prolonged resurgence.

The coronavirus pandemic wreaked considerable pain in the energy sector in 2020, as demand and prices collapsed. Oil and gas was the worst performing S&P 500 sector in 2020. However, so far this year, it’s the top performer. From worst…to first.

Stocks on Tuesday took a breather from their rally. The Dow Jones Industrial Average fell 143.99 points (-0.46%), the S&P 500 slipped 31.53 points (-0.81%), and the tech-heavy NASDAQ shed 230.04 points (-1.69%). In pre-market futures contracts Wednesday, stocks were trading higher as investors bought into the dip, with stocks in cyclical sectors such as energy leading the charge.

Soaring crude oil prices and a fast-mending economy are helping the energy sector post the stock market’s biggest gains so far in 2021. An even stronger performance for energy equities probably lays ahead.

The 2020 pandemic year was a crucible for major oil and gas companies, from which they are emerging in leaner and tougher shape. When energy demand imploded last year, the super-majors slashed capital expenditures, cut dividend payments, and reduced debt. Some of these companies also took advantage of the mergers and acquisitions boom to buy rivals and achieve greater economies of scale through consolidation.

The pandemic survival tactics deployed by energy companies will pay off in 2021 and beyond, as oil prices rise and these companies enjoy record cash flow. That’s a bullish sign not just for energy equities but also for economic growth and the broader stock market.

According to a new report from energy research firm Wood Mackenzie: “The scale of the financial reset has primed the sector for a recovery in free cash flow. At an average price of US$55/bbl, we estimate free cash flow generation could top US$140 billion in 2021, exceeding any previous year since 2006. If oil prices reach US$70/bbl, free cash flow would be double the previous peak.” See the following chart, depicting free cash flow for international oil companies (IOCs): 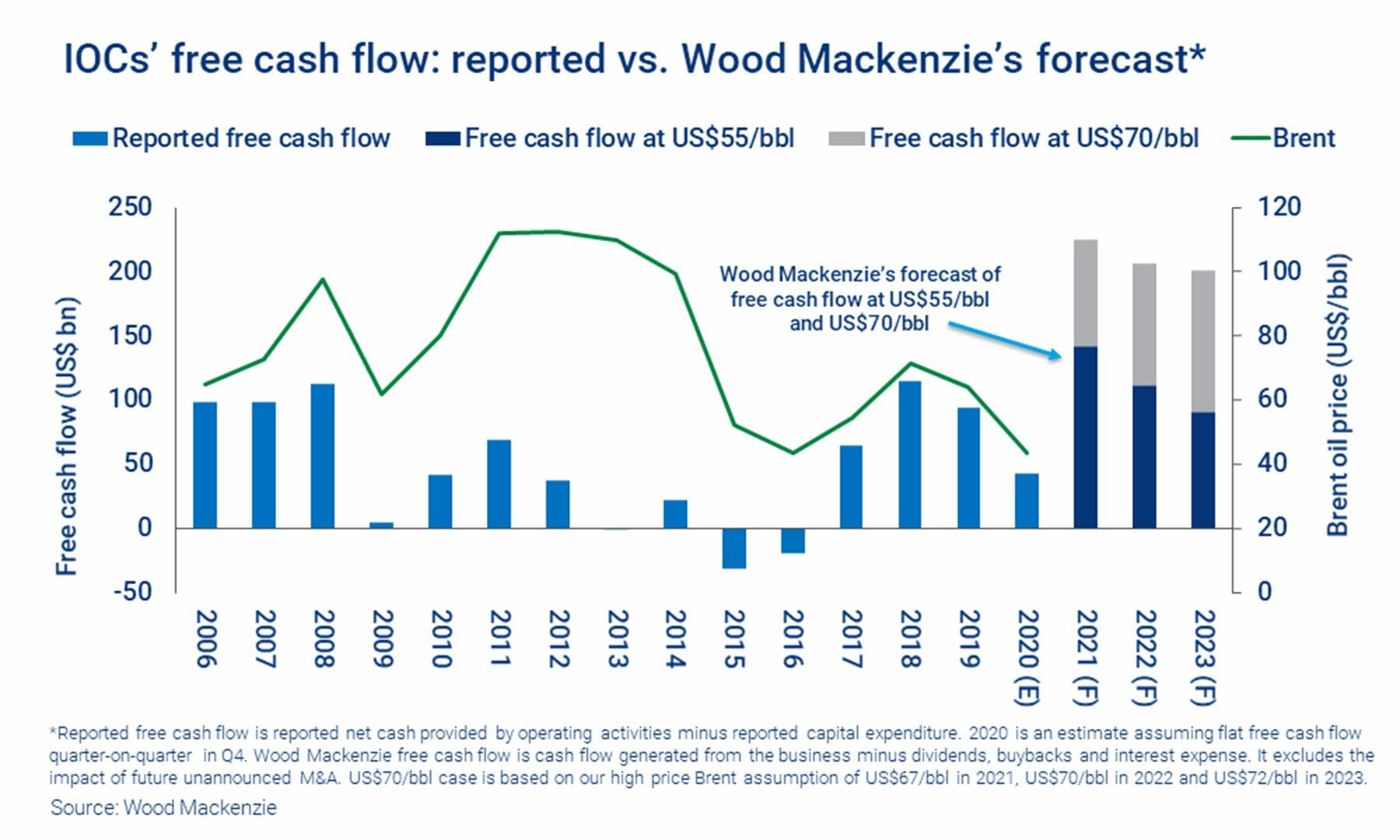 Analysts at Bank of America (NYSE: BAC) projected in a new report that oil prices are set to rise this year at the fastest pace since the 1970s over the next three years, perhaps into triple-digit territory. Goldman Sachs (NYSE: GS) recently predicted that low supply and growing demand once the pandemic fades could push the price of Brent to $75/bbl in the third quarter of 2021.

To be sure, we’ve reached an inflection point, hastened by the pandemic, whereby renewable energies (solar, wind, etc.) are increasingly supplanting fossil fuels. But the fact remains, the world still heavily depends on oil and gas. Electric vehicles, for example, are increasing in prevalence but they won’t substantially replace the internal combustion engine for many years. Into the foreseeable future, the global economy will depend on a mix of energy sources that includes crude oil.

Those of us who lived through the recession of 1973-1975 remember that rising oil prices back then were a scourge, but they occurred during a period of stagnating growth and price inflation (“stagflation”). The economic context is far different today.

It’s true, if oil prices get too high, they raise household and corporate costs and ignite inflation. But if they get too low, as they did during the worst of the pandemic-induced crisis, they indicate lack of economic activity and scores of jobs are lost in the energy sector and its ancillary segments.

In the context of the negative oil prices we experienced last April, the recent rapid rise in crude oil prices can be viewed as a return to economic health and energy sector equilibrium.

Of course, the robust ascent of oil prices indicates that we could be in for a bout of inflation later this year. Climbing bond yields in recent weeks attest to this risk.

However, in light of the global economy’s deep decline last year due to the virus, a modest amount of inflation would be a tonic for the economy and investors. Federal Reserve Chair Jerome Powell has overtly said as much and the U.S. central bank remains committed to stimulus.