Why Some Risk Is Good For You

There’s no such thing as a free lunch.

That adage especially applies to Wall Street. If you want a higher return, you will need to buy a riskier asset. And if you want less risk, you will have to settle for lower expected return.

If you want a “riskless” investment, buy a U.S. Treasury security. (Whether you agree or not with its view, the market treats the U.S. government’s default risk as essentially zero.) But even with the recent jump, the 10-year U.S. note yields only 1.6%. Shorter-term Treasurys yield even lower. For example, the two-year note yields a measly 0.14%.

With low returns like that, thanks to inflation, your real return will probably be negative. So unless you are content with losing your spending power by holding onto Treasurys, you should have some amount of risk in your portfolio.

“Risk” Gets a Bad Rap

For many people, the word “risk” has a negative connotation. It’s associated with loss. However, when it comes to investing, risk actually refers to the possibility that the investment return will be different than what was expected. 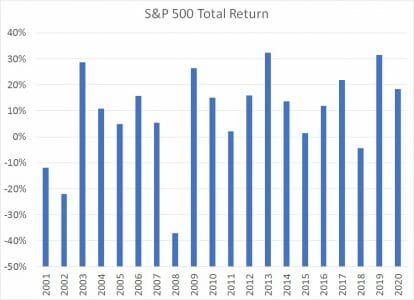 The point is that the stock market is risky in that the return each year fluctuates a lot around the expected return. But risk is not all bad. There is positive risk and negative risk.

During the last 20 years, the yearly return beat the expected return (9%) twelve times (good) and failed to beat eight times (bad). So the actual return was better than the expected return 60% of the time. Moreover, the return was negative only four times out of 20, thus investors made money in the stock market most years.

And of course, over the long run, despite occasional, and sometimes scary, corrections, the stock market trends upward. Unless your timing is absolutely terrible, it’s hard to lose money if you stay invested.

To make good money through investing, you will have to take some risks. The key is to find a balance between risk and reward. You want to try to find stocks that have greater potential upside than potential downside. This is why it is not a great idea to chase high price-to-earnings (P/E) stocks that have already made a huge run. A lot of positive expectations have already been baked into the stock price, whereby even excellent financial results can sometimes result in a stock decline, a case of “not good enough.”

Also, I think it’s a good idea to invest most of your money into a core group of stable quality companies, and only use a small portion to go for the home runs. The stocks with the best upside potential are the shares in young companies whose growth potential hasn’t been fully realized by the market.

To find these promising young companies, a time-proven source is our flagship publication, Personal Finance.

My colleague Jim Pearce is the chief investment strategist of Personal Finance. Jim believes that in the coming days, the #1 tech initial public offering of 2021 will start minting new millionaires. That’s why he’s calling his trade the “Tech IPO Retirement Stock.”

It’s hard to imagine becoming a millionaire off one stock. But that’s exactly what happened to anyone who moved early enough on any one of the famous FAANG stocks. And it’s exactly what could happen to you, if you follow Jim Pearce’s simple trade. Click here for details.