Going Against the Grain

Looking for a beaten-down sector of the stock market to invest in? There aren’t many left. As my colleague Robert Rapier noted a few days ago, all 11 of the S&P 500 GICS (global industry classification standard) categories posted positive results during the first quarter of this year.

Energy stocks have been the big winners, up nearly 31% thus far in 2021. The global economy is quickly reopening so there are a lot more cars on the roads. The price of oil has jumped 50% over the past six months.

The Financials sector is also benefiting from increased business activity, gaining 16% during Q1. The same principle holds true for Industrial stocks, which posted an 11.5% return during the quarter.

However, there was one notable laggard during the quarter. Consumer Staples eked out a meager 1.8% gain, less than one-third of the 5.8% rise in the index.

That surprises me. The Consumer Staples category consists mostly of food & beverage manufacturers, along with makers of non-durable household goods. It is considered the sector least vulnerable to economic cycles since you can’t live without those products.

Last year’s epic run on toilet paper provided a vivid demonstration of just how dependent we are on many of those products. Yet, the Consumer Staples Select Sector SPDR Fund (XLP) is only 12% higher now than it was at the start of last year. 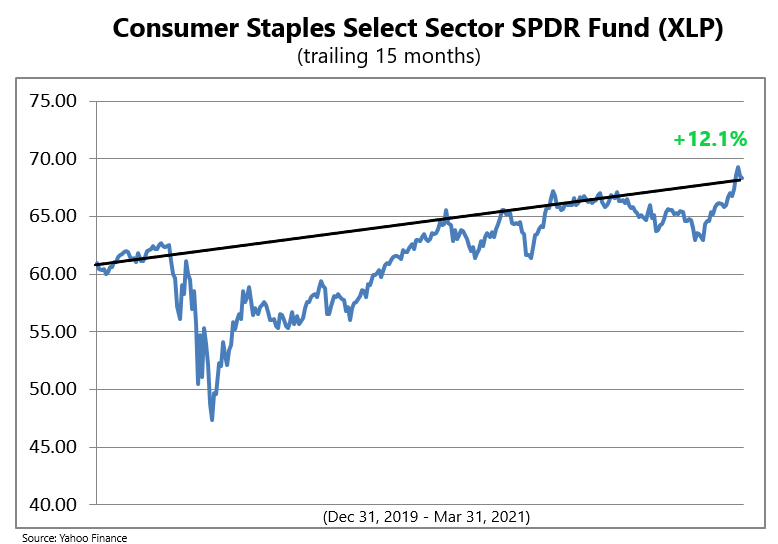 Similar to the index, the fund is cap-weighted based on each company’s relative stock market value. Its top 10 holdings read like a “who’s who” of consumer product companies.

One of the cheaper stocks in the sector is cereal maker General Mills (NYSE: GIS). At a recent share price of $61, GIS is valued at 16 times forward earnings. That is nearly a third less than the multiple of 22 for the S&P 500 Index.

Its price-to-sales ratio of 2.05 is also roughly a third less than the same multiple for the index. The implication is clear: Wall Street does not believe that General Mills can grow sales and profits at the same rate as the overall stock market.

Based on the company’s fiscal third-quarter results (ending February 28) released two weeks ago, the assumption is not proving true. During the quarter, General Mill’s increased its diluted earnings per share (EPS) by 30% compared to the same quarter last year.

Bear in mind, the same quarter last year was largely unaffected by the pandemic. So, you might infer that the big jump in profitability is temporary. That’s not what General Mills says.

According to the company, the improvement in EPS is due primarily to the execution of a strategy that happened to coincide with the pandemic. General Mills is selling off marginally profitable businesses so it can focus on its biggest and most profitable product lines.

As for the future, “General Mills expects that the COVID-19 pandemic will drive continued elevated consumer demand for food at home, relative to pre-pandemic levels, through the remainder of fiscal 2021 (ending May 31).” If so, then the next set of quarterly comparisons should come in better than expected.

If you want to speculate on General Mills outperforming Wall Street’s pessimistic expectations, consider buying a call option instead of owning the stock. A call option appreciates in value when the price of the underlying security goes up.

A few days ago while GIS was trading near $61, the call option that expires on July 16 at the $60 strike price could be purchased for $3. For this trade to become profitable, GIS only needs to appreciate 4% over the next three months.

If GIS makes it to $66 by then, the gross return (not including brokerage fees) on this trade would be 100%. That means an 8% move in the stock would produce a return on the option of 12 times that amount.

Those are very good odds in my book. Sure, you could also lose everything if GIS falls below $60 by expiration. But barring a major stock correction, I don’t think that is likely.

The dominant theme of the stock market this year is sector rotation. What was hot last year is now cold, and vice versa. As more money transitions out of overvalued momentum stocks, I expect companies like General Mills to pick up the slack.

Editor’s Note: Jim Pearce just provided invaluable advice to help you build wealth. But we’ve only scratched the surface of the expertise on the Investing Daily team. Consider our colleague J.R. Butts.

J.R. Butts is the chief investment strategist of our premium trading service, Maximum Profit. After months of painstaking research, he has discovered an odd blip that regularly occurs in the markets. He calls it the “Alpha Anomaly” and he has leveraged it to generate gains for his followers of 183%, 242%, even 331% or more.

PS: Keep an eye out for an exciting offer from Investing Daily. It’s “the next big thing” from our colleague Robert Rapier, chief investment strategist of Utility Forecaster.