An Investment Strategy as Good as Gold

One year ago, I closed out my position in Barrick Gold (NYSE: GOLD). Some of my readers thought I’d lost my mind. Gold mining stocks were surging as the coronavirus pandemic forced central bankers to pump money into the global economy to prevent it from collapsing.

That’s exactly why I sold it. When panic grips the market, investors tend to extrapolate recent events indefinitely into the future. I figured it wouldn’t be long until COVID-19 was brought under control. Once that happened, the gold rush would be over.

My hunch proved correct. Four months later, the price of gold peaked above $2,000 an ounce. That turned out to be as high as it would go. A month ago, it fell below $1,700 before bottoming out. That’s almost exactly where it was trading a year ago when I sold Barrick.

For several months, Barrick’s share price increased considerably more in value than did the price of gold. Now, both prices are back in lockstep with one another. 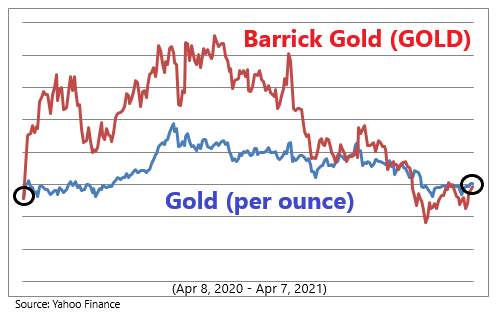 Now that everybody is ignoring gold, I’m thinking about buying it again. It isn’t because I believe that COVID-19 is about to surge out of control again. It all has to do with money supply and the long-term implications of central bank policy.

Even though the medical threat of COVID-19 may soon be gone, its legacy will be with us for a long time. According to the Committee for a Responsible Federal Budget, $3.6 trillion in relief spending already has been dispersed. That is in addition to $2.9 trillion spent by the Federal Reserve Bank to provide liquidity for the bond market.

In both cases, there are trillions of more dollars that have been allotted but not yet spent. And if President Biden has his way, another $1.9 trillion will soon be allocated for infrastructure spending.

To be sure, there is no viable way out of the current crisis without spending a lot of money. Millions of Americans have lost their jobs and need financial assistance. The national unemployment rate is now 6% compared to 3.5% prior to the pandemic.

The question is how to get that money off the books before it becomes a problem. At the moment, interest rates are low so the cost of servicing that debt is manageable. But as the economy strengthens, unemployment should come down. At some point, short-term interest rates will most likely head higher.

Last week, Federal Reserve Chair Jerome Powell acknowledged that the United States is “on track to allow a full reopening of the economy fairly soon.” At the same time, he confirmed that he intends to keep short-term rates low until we are back to full employment.

The net result is a projected increase in the federal deficit of more than one trillion dollars this year. And that’s on top of a tripling of the deficit last year.

It is only a matter of time until the value of the U.S. dollar starts to weaken. And when that happens, the price of gold could really take off.

The current fascination with cryptocurrencies has diverted attention away from gold as an inflation hedge. While the price of gold has gone nowhere over the past year, Bitcoin (BTC) has increased more than eight times in value.

I don’t know how Bitcoin will hold up in the years to come. But if something happens to undermine its perceived security as a store of wealth, then investors may come storming back into gold.

One way to play it is to buy the SPDR Gold Shares (GLD) exchange-traded fund, which owns notes that are directly tied to the price of gold. That way, you get all of the financial benefits of owning gold without the cost and inconvenience of having to store it.

One downside to owning gold is that it pays no dividends so you derive no economic benefit until it is sold. However, there is a way to use your shares of GLD to generate immediate income.

For every 100 shares of GLD that you own, you can sell a covered call option contract. In short, you are selling to someone else the right to buy your shares at a specified price within a certain timeframe. For example, last week while GLD was trading near $164 you could sell a covered call at the $165 strike price that expires on September 30 for $7 per share.

That works out to an options premium yield of 4.2% in less than six months. On an annualized basis, that equates to a yield of roughly 9%. If GLD appreciates above $165 prior to the option expiration date then your shares will be called away from you at that price. However, if GLD remains below $165 then you get to keep your shares plus the $7 options premium at which time you can repeat the process to collect another instant “dividend” payment.

Editor’s Note: Looking for other ways to leverage the trading strategy described above? Keep an eye out for an exciting offer from Investing Daily. It’s “the next big thing” from our colleague Robert Rapier, chief investment strategist of Utility Forecaster.