The War on Drugs Is…a Bust

For decades, people viewed marijuana through the lens of government propaganda. The War on Drugs launched by Richard Nixon in 1971 was Nixon’s deliberate strategy to demonize his perceived enemies. He couldn’t outlaw political opposition, but he could use a crackdown on drug use as a way to legally harass and persecute the cultural left. It was a sinister masterplan as befits the man who was known as “Tricky Dick.”

But according to the latest polls, most people now see marijuana differently. They want it legalized. The War on Drugs (which especially targeted marijuana) is over. Marijuana won. Meanwhile, other drugs such as “magic mushrooms” and LSD are getting legalized as well. It’s what the public demands.

Yet another poll has found that a majority of Americans support legalizing marijuana and clearing the records of those with prior cannabis convictions.

The poll was commissioned by CBS News and released on the marijuana holiday 4/20. Marijuana adherents recognize April 20 (or 4/20) as an international holiday for cannabis culture.

The CBS poll shows that 55% of respondents said recreational cannabis should be legal in their own state, compared to 42% who said it should be illegal.

The CBS poll interviewed 1,004 adults from March 9-14 and has a margin of error of plus or minus 3.7 percentage points.

While still a sizable majority, the level of support found in the CBS poll is notably lower than several other recent surveys, including one released by the Pew Research Center this month. In the Pew survey, a majority of U.S. adults (91%) said either that marijuana should be legal for medical and recreational use (60%) or that it should be legal for medical use only (31%).

Unique to the CBS poll, however, is that participants also were queried about related cannabis issues. Notably, 59% of adults said that people with non-violent marijuana convictions in states that have legalized should have their records expunged, compared to 37% who said the conviction shouldn’t be cleared (see tweet). 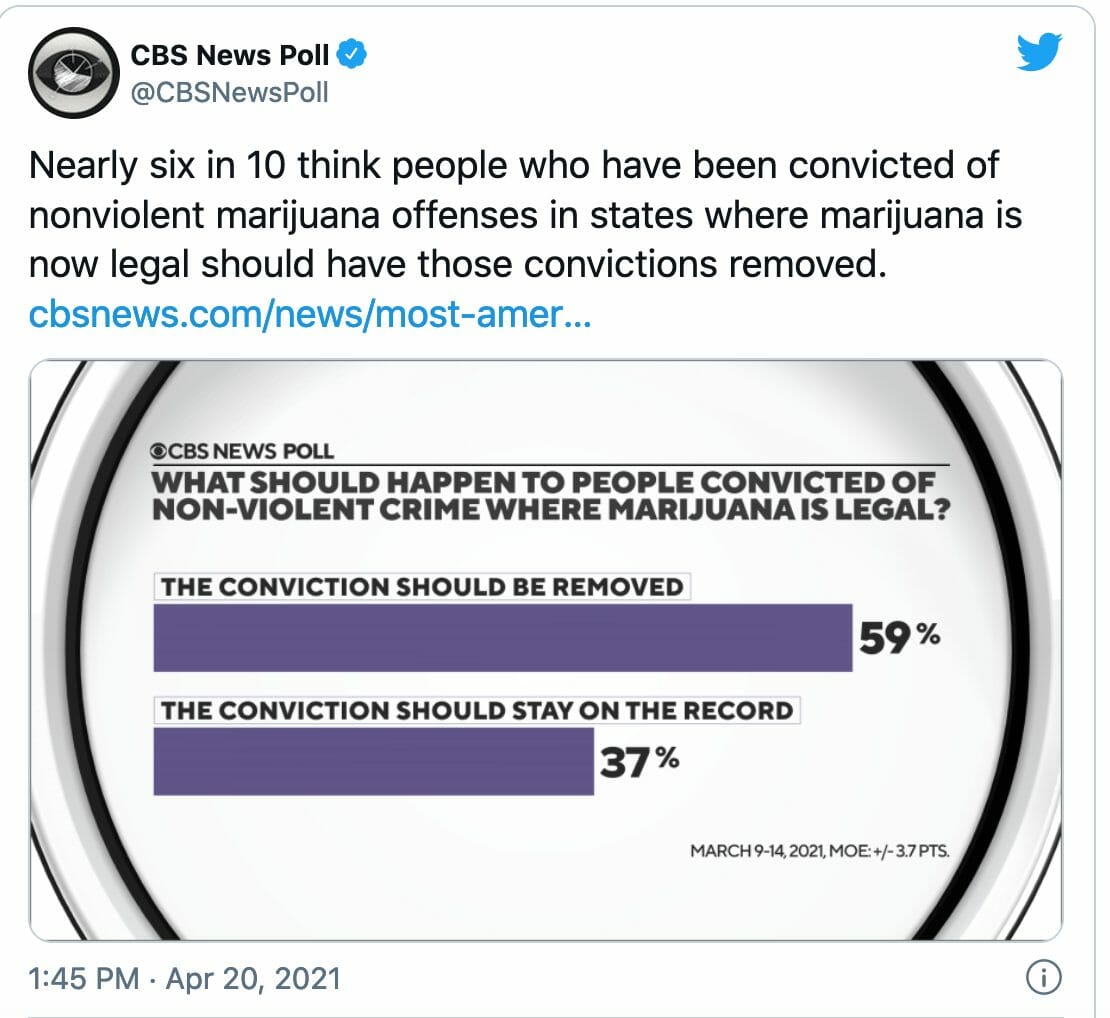 The November 2020 general election was a watershed for the marijuana industry, when a raft of initiatives lifting restrictions on pot were passed.

Since the election, both Virginia and New York state have legalized recreational marijuana. The increasing legalization of recreational and medicinal marijuana is one of the biggest business trends unfolding today. Pot is becoming a multi-billion dollar industry, with profound implications for consumer society.

As the industry grows, it will revitalize communities and ancillary businesses, by creating more jobs for citizens of varied educational levels and skill sets. As legalization spreads throughout the U.S., it will spawn new industries, a need for product innovation and force existing companies to rethink their products and services.

Want to profit from the marijuana trends that I’ve just described? For our latest report on the best investment opportunities in cannabis, click here.