Why REITs May Be Right This Time

It is sometimes said that real estate investment trusts (REITs) are the canary in the coal mine when it comes to inflation. That’s because most REITs are highly leveraged. In effect, they are a form of financial arbitrage.

REITs borrow money to acquire income-producing property. After paying their expenses, including servicing their debt, they must distribute at least 90% of their net operating income to their shareholders to avoid paying corporate income tax.

When interest rates rise, so do borrowing costs. For that reason, the threat of rising inflation usually sends REITs lower on the expectation of reduced operating margins.

That may have been true at one time, but not anymore. Most REITs have automatic rent escalation clauses written into their lease agreements based on changes to the Consumer Price Index (CPI).

That way, they don’t have to negotiate with their tenants to raise rents. Once CPI exceeds a specified level, the rents go up whether they like it or not.

Nevertheless, the mistaken notion that all REITs are vulnerable to rising interest rates still persists on Wall Street. You can see it at work in the performance of SPDR Dow Jones REIT ETF (RWR). 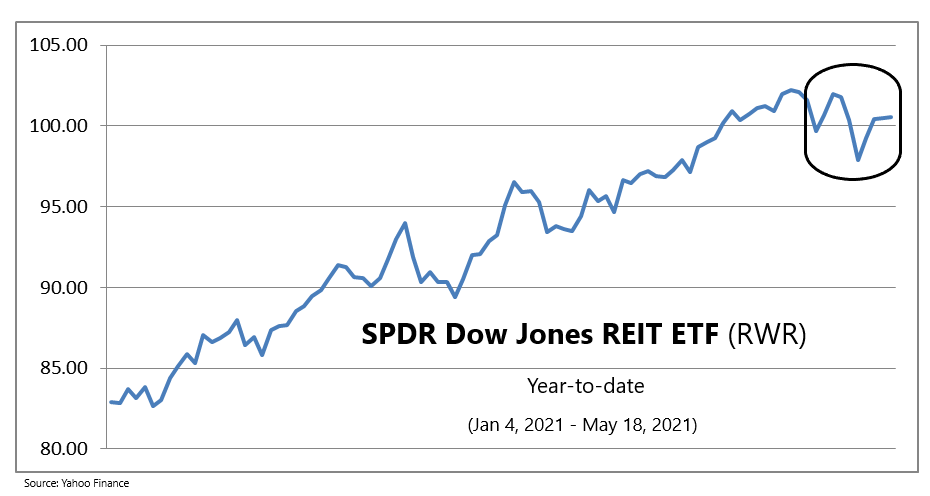 Two weeks ago, RWR fell 4% when the U.S. Department of Labor (DOL) announced that the CPI rose 4.2% over the past twelve months. The DOL noted that it was “the largest 12-month increase since a 4.9% increase for the period ending September 2008.”

As you may recall, something else was going on in 2008. Namely, a meltdown in the housing sector that triggered a stock market crash. In that case, a corresponding decline in real estate investments of all types was completely justifiable.

However, I think the stock market is getting it wrong this time. Unlike 13 years ago, the real estate market is not collapsing. In fact, just the opposite is the case. Real estate values are rising due to surging demand. But speculation in the form of a spike in investor-owned properties is not rampant.

For that reason, I view a drop in REIT prices due to inflation concerns as a buying opportunity for income investors. It is unlikely that REIT dividend payments will go down as a result of rising interest rates, so lower share prices equate to higher dividend yields.

Even if interest rates do go higher, I expect most REITs to raise their dividends over the next 12 months. The automatic rent escalators will kick in even if a REIT’s borrowing costs remain the same, thereby improving its operating results. The net result is a higher dividend payment to shareholders and more love from Wall Street.

In some cases, it’s already happening. At the end of last year, I named Iron Mountain (NYSE: IRM) as one of “Our Three Favorite High-Yielders for 2021.” Since then, it has appreciated nearly 50%. Not bad for a “stodgy” REIT in less than six months!

If you are buying REITs for income, the advantage of waiting to see if their share prices drop further is mitigated by the missed dividend payments. But if you want to speculate on REIT prices by trading options, I would advise waiting a little while to see if other inflationary news upends the stock market.

Already, there is a growing chorus of voices urging the Fed to begin tapering now. Selling bonds out of its portfolio rather than buying them would probably result in higher interest rates. But doing so sooner rather than later should allow rates to rise more gradually.

I doubt that Fed Chair Jerome Powell would reverse course so soon. A few weeks ago, he promised to maintain an accommodative monetary stance despite a “transitional” rise in inflation. Just how long of a time period that equates to is open to interpretation, but presumably it will take more than a month or two of unsettling CPI data to get him to change his mind.

For that reason, I expect REIT prices to fall further in the months to come. Not by a lot, but by enough to create short-term trading opportunities for call and put options. If you don’t know how to do that on your own, I recommend that you follow the advice of someone who has been doing it very successfully for a long time.

I’m referring to my colleague Jim Fink, chief investment strategist of Velocity Trader. Jim has developed a proprietary method for trading options that consistently beats Wall Street at its own game, in markets that are going up, down or sideways.

Jim’s 310F trade is the most accurate way I’ve ever seen to double your stake in just three days. Want to learn about his next “high velocity” trades? Click here now for details.