When it legalized recreational weed in 2018, Canada attracted an investor free-for-all. Many marijuana companies placed their headquarters in Canada and launched initial public offerings (IPOs) on the Toronto Stock Exchange. Canada was widely perceived as “ground zero” for marijuana expansion.

But things haven’t gone as planned. Canada’s marijuana industry has turned out to be, in the argot of the drug culture, a buzz kill.

And therein lays a warning for investors. Don’t get seduced by a media narrative. You need to study the singular fundamentals of every marijuana investment. First, let’s examine the tale of woe in the Great White North.

In October 2018, Canada legalized on the federal level the possession and use of recreational marijuana. Canada was the first G7 nation to take this bold step and it triggered a seismic shift in the worldwide marijuana industry.

In late 2018, after adult-use pot was legalized, many cities and rural communities in Canada geared up for the “green rush.” Government and business leaders expected an employment boom generated by dispensaries; farmers got ready to plant marijuana as the next great cash crop. It was like San Francisco during the 19th century gold rush.

One reason optimistic projections have fallen flat is the tightly regulated distribution system implemented by the Canadian government, which largely bans advertising and marketing.

Those restrictions are anathema to American society, but Canadians are more enamored of big government and they also take particular pains to foster a civil society. It’s tough, though, to grow a business if you can neither advertise nor market your wares.

That said, there’s still hope for Canada’s marijuana market. According to marijuana research firm New Frontier Data, legal marijuana sales in the country are projected to grow between now and 2025 (see chart). 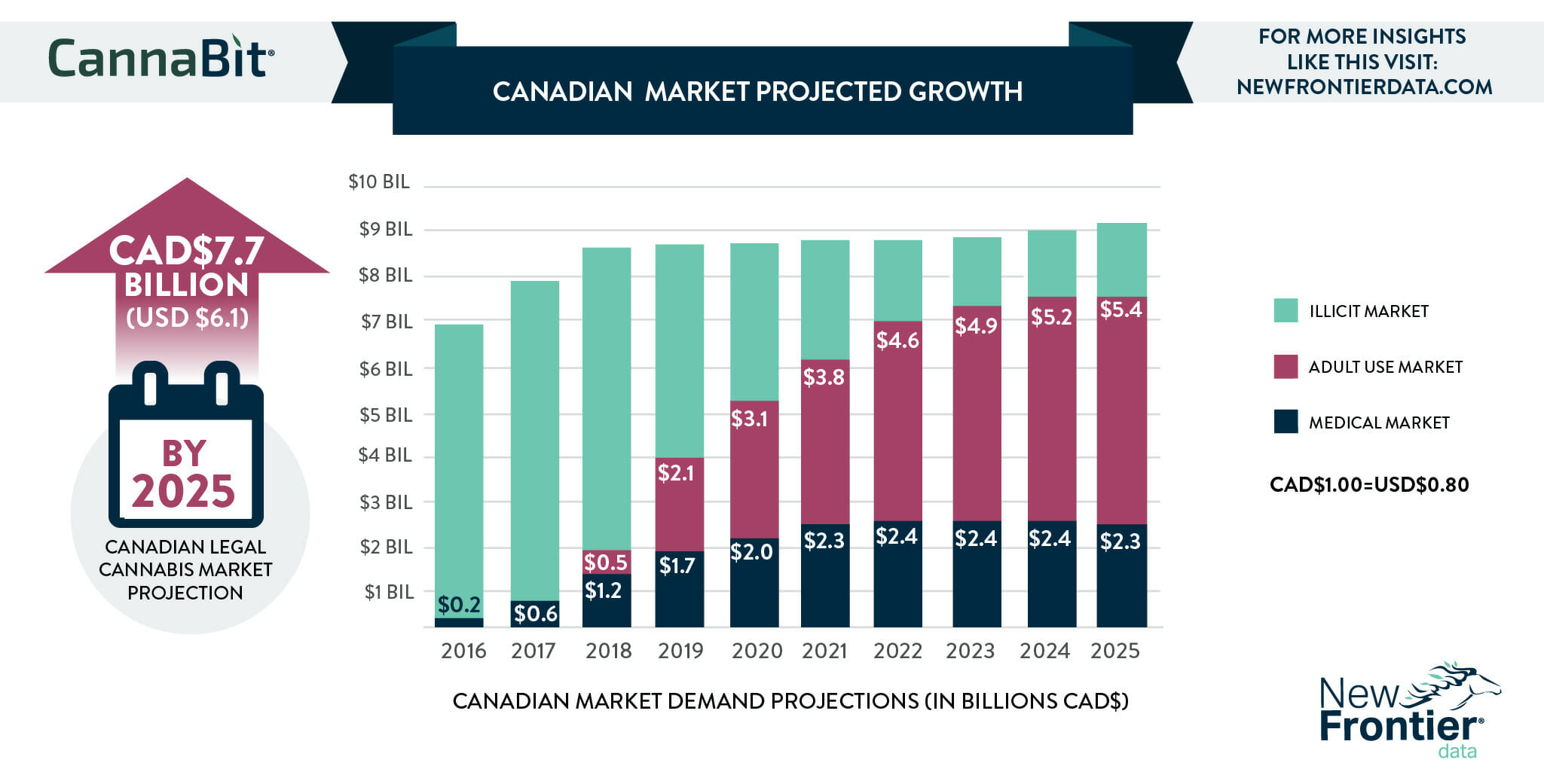 You’ll notice from the chart, though, that this growth mostly entails encroachment of legal sales into the black market. Total demand is expected to remain nearly flat.

In the meantime, the marijuana industry shakeout in Canada has been brutal. Smaller, entrepreneurial firms without sufficient cash reserves are getting crushed.

Obstacles remain to marijuana sales in Canada, notably red tape and slow-moving bureaucracies. Just because something is technically legal doesn’t mean officials are expediting its use.

Provincial governments in Canada have granted licenses for legal pot shops at a snail’s pace, which has motivated millions of consumers to get their marijuana on the black market. Because street pot evades taxation, it’s considerably cheaper than legally sold pot, a dilemma that also afflicts the marijuana industry in the U.S.

Statistics Canada found that only 28% of marijuana buyers in Canada meet all of their marijuana needs via legal sources. Another headwind are recent polls that show Canadians are less interested in partaking of pot than Americans. Canadians are reluctant to adopt what they tell pollsters is just another vice.

The main motivation of Prime Minister Justin Trudeau’s government to legalize marijuana was to end the disproportionate number of marijuana arrests among minorities and low-income people, not necessarily to create a Big Business. Investors had different assumptions.

Following the Canadian government’s move in 2018, IPOs swamped the Toronto exchange; venture capital poured into even dubious enterprises; and farmland was scooped up at exorbitant prices. Boom followed bust. Sales have plummeted; the number of bankruptcies and layoffs have soared; and the stock prices of marijuana companies have crashed.

Two and a half years after legalization, most marijuana producers in Canada are posting massive losses. To add insult to injury, a giant new competitor is waiting in the wings: Mexico.

Mexico is on the verge of legalizing marijuana, which would make the country the world’s most populated country to authorize cannabis for medical and recreational purposes. It also would make Mexico the biggest producer of weed. Marijuana grown by low-cost labor in Mexico would be considerably cheaper than Canada’s.

Accordingly, Canada’s marijuana industry is rapidly consolidating, putting most of the market into the hands of just a few large, publicly traded companies.

You still can reap enormous investment gains in the fast-growing, global marijuana industry. However, as Canada’s experience shows, expectations don’t always pan out. When picking a pot stock, you need to be especially careful.

The good news is, we’ve done the due diligence for you. For our latest report on the best investment opportunities in cannabis, click here.