Marijuana represents a “stoner” sub-culture among rappers, epitomized by celebrity canna-preneurs such as Snoop Dogg, a pot-smoking rap star who has even forged marijuana ventures with style doyenne Martha Stewart…of all people.

On one song in particular, Snoop Dogg hints that he and the former president of the United States had shared a blunt at the White House: “Still sippin’ gin and juice while I’m smoking marijuana / I bet you never blew with Obama.”

In addition to gangster rapper Snoop Dogg, Imperial Brands (OTC: IMBBY), a multinational tobacco company based in the UK, also made a big investment in Oxford Cannabinoid Technologies.

We’re witnessing a surge in marijuana IPOs this year, as pot stocks rise in value. We’re also seeing mega-cap food, beverage and tobacco companies jump aboard the marijuana bandwagon with massive investments. Welcome to the second wave of the “green rush.”

Wealthy celebrities are putting their chips on the table, too. In March, actor/comedian Seth Rogen announced the U.S. launch of his cannabis brand Houseplant.

All of this financial and entrepreneurial activity in the marijuana industry has one common theme: the craze for cannabidiol (CBD). Oxford Cannabinoid Technologies’ cannabinoid research program places a heavy emphasis on compounds such as CBD to treat ailments that have been resistant to conventional drugs. One of Oxford’s selling points is that its products are a way to combat the deadly epidemic of opioid addiction.

CBD accounts for up to 40% of the cannabis plant’s extract. Unlike its cousin THC, CBD doesn’t give users a buzz. Sales of CBD are fueled by claims that it can reap a bevy of benefits, such as reducing pain, calming anxiety, and enhancing mental focus. CBD sales in the U.S. are soaring, making it the “next big thing” for investors (see the following chart). 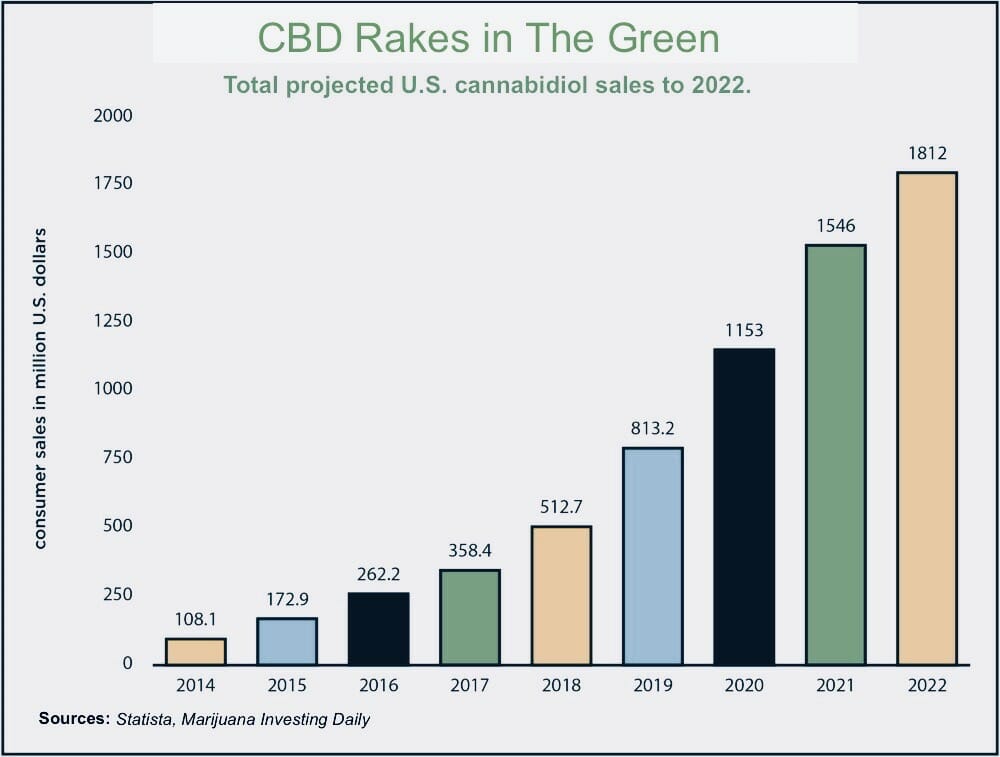 CBD has been studied in laboratories and clinics for relief of pain, nausea and vomiting, anxiety, and loss of appetite. Empirical evidence confirms the genuine health benefits of CBD.

Still relatively new to mainstream consumerism, CBD is becoming a household name. Hence the flurry of IPO and venture capital activity in this space. Bestowing marketing power to CBD is the growing involvement of entertainment industry icons.

Companies involved in CBD are outstanding investment opportunities. But you need to choose wisely, to separate the fly-by-night companies from those with sustainable momentum. To discover cannabis plays with the greatest potential for long-term profit, click here for our free report.