CBD and The Power of Family

My 90-year-old father is afflicted these days with myriad ailments. He recently asked me whether cannabidiol (CBD) could help with his muscle pain and if so, whether I could procure a supply for him.

So here was my dad, a card-carrying member of the Scotch-and-soda generation, asking me to score a cannabis-derived product. My 88-year-old mom piped in with a similar question about CBD, regarding her arthritis. I provided them with medical brochures about CBD’s efficacy and counseled them to first speak with their doctor.

This interaction with my parents is strong anecdotal evidence that CBD has gone mainstream and its growth potential is enormous. (It’s ironic in the context of my teenage years, when my mother would ransack my bedroom like a prison guard, looking for cannabis contraband.)

CBD accounts for up to 40% of the cannabis plant’s extract. Unlike its cousin THC, CBD doesn’t give users a buzz.

CBD has become a hot topic and people of all ages and demographics are talking and sharing opinions about the substance. Everyday conversations forge consumer perceptions and beliefs, regardless of the product. For CBD, the social network is especially important.

Therein lays a marketing opportunity for cannabis companies. CBD providers that tap into the personal touch and generate word-of-mouth about CBD are benefiting the most. What’s more, those that wrap themselves in the warm and fuzzy embrace of celebrity influencers, such as style doyenne Martha Stewart, will have the advantage in the marketplace.

The power of social networks is a fundamental element both for expanding awareness of CBD and motivating first-time (and often wary) consumers to give it a try.

My anecdotal family experience with CBD is confirmed by the empirical evidence. Marijuana research firm New Frontier Data released a report on June 1, called The U.S. CBD Consumer Series, Vol. IV: Social Influences, that underscores the importance of the social network on CBD consumption. The report also analyzes how such influences differ among consumers and nonconsumers (see the following infographic). 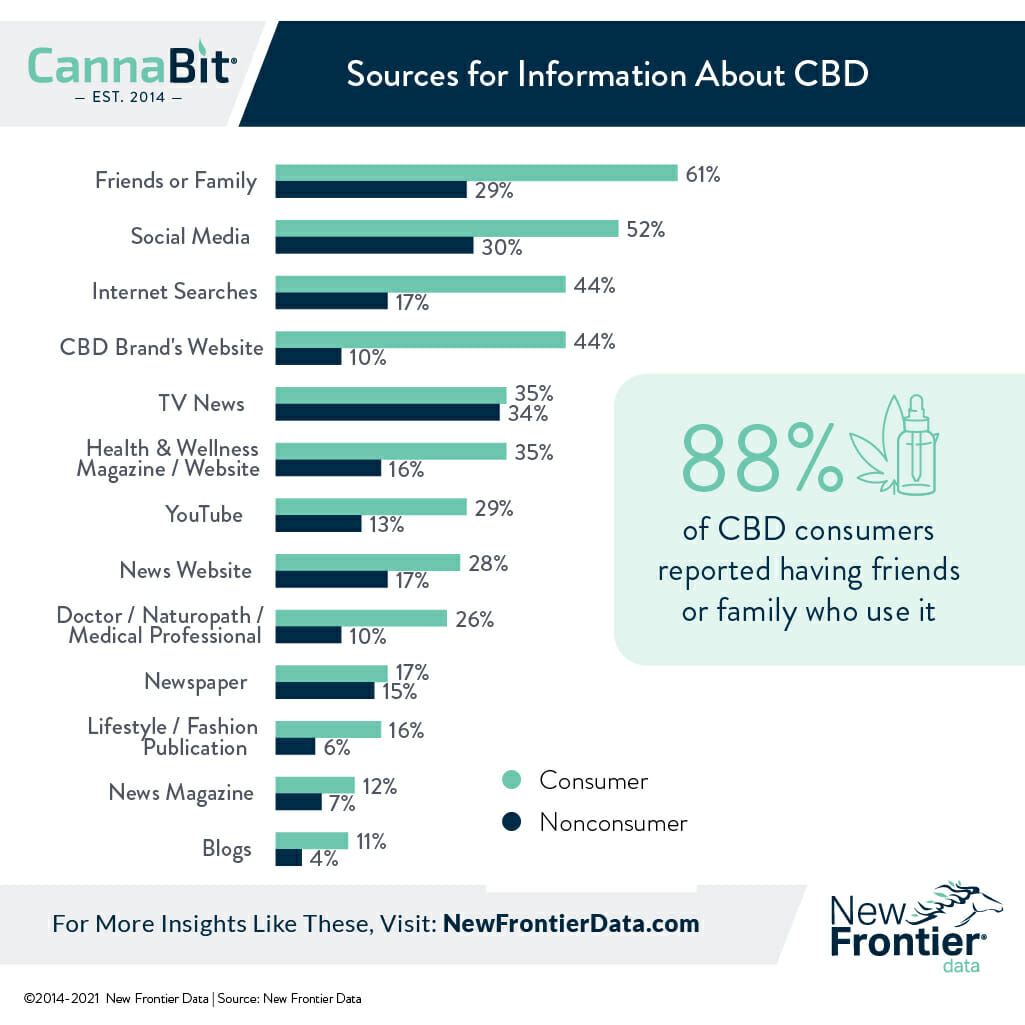 More than one-third (39%) of consumers utilize CBD primarily for pain management. The influence of close relations’ recommendations is powerful, when comparing consumers to nonconsumers.

The legalization and retail emergence of CBD is a relatively new phenomenon. A growing body of scientific evidence shows that CBD is safe and conveys many health and beauty benefits.

However, a large segment of the population is skittish about sampling a substance connected to formerly demonized cannabis. Hence, the heavy influence of the social network. Trust plays a big role in getting people to purchase anything related to marijuana.

The New Frontier report states: “Learning about CBD products from trusted personal sources is important for creating a sense of openness and willingness to try a novel product.”

CBD consumers are more likely than nonconsumers both to seek out information about it, and from a broader array of sources.

As the New Frontier report puts it:

“The communication of a customer’s overall satisfaction regarding CBD’s efficacy and benefits enables existing consumers to encourage new consumers. As such, customer satisfaction is not just about meeting the needs of current consumers, but also about delivering a product which both pleases them and inspires recommendations to others. For products and brands in an emerging industry, such avenues of consumer engagement, education, and conversion can prove to be invaluable.”

CBD is one of the most prominent consumer trends you can find and it still enjoys robust upward momentum. Looking for ways to profit from the mainstreaming of cannabis and related products such as CBD? Click here for our free report.