The Drug War: What Is It Good For?

“War, huh. What is it good for? Absolutely nothing.”

That’s the famous refrain from the 1969 Motown hit War, sung by The Temptations, and as I wrote this article today, those lyrics popped into my head.

The song was a counter-cultural protest against the Vietnam War, but more than a half century later, the vast majority of the American public expressed the same sentiment, about the War on Drugs.

Two-thirds of American voters think that the War on Drugs has been a failure and should immediately cease, according to a new poll released June 9 by the American Civil Liberties Union (ACLU) and Drug Policy Alliance (DPA). This percentage of voters also expressed support for decriminalizing possession of currently illegal substances.

The survey was released in advance of a dubious milestone: the 50th anniversary of President Richard Nixon declaring the drug war (see the following tweet). 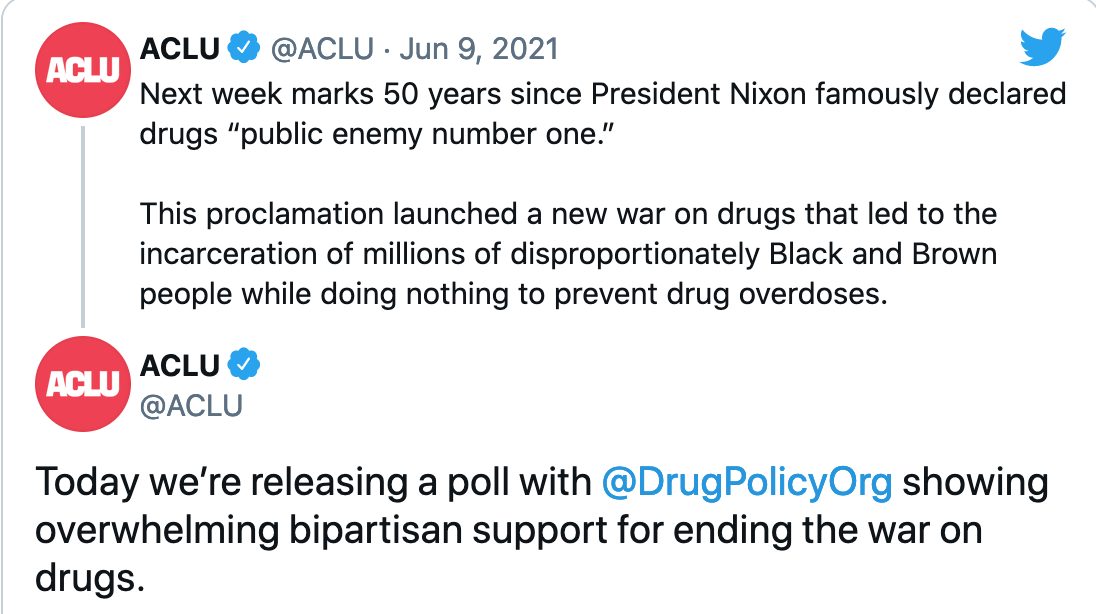 The new survey involved interviews with 800 registered voters from May 17-20.

With so many Americans embracing drug legalization, it’s more evident than ever that the marijuana industry’s momentum will continue into the foreseeable future.

Cannabis investments have been on a tear so far this year and considering socio-political trends, their momentum appears assured.

The big lie about drugs…

The War on Drugs has resulted in mass incarceration (mostly of minorities and the poor), but it didn’t make a meaningful dent in drug consumption.

In case any of you readers doubt that the War on Drugs was politically motivated from the start, consider the following revelation from one of its key architects.

John Ehrlichman, Nixon’s aide on domestic affairs (who would eventually get convicted in the Watergate scandal) was the architect of the War on Drugs. Here, in Ehrlichman’s own words, was the rationale for the Nixon administration’s draconian drug policy:

“You want to know what this was really all about? The Nixon campaign in 1968, and the Nixon White House after that, had two enemies: the antiwar left and black people. You understand what I’m saying? We knew we couldn’t make it illegal to be either against the war or black, but by getting the public to associate the hippies with marijuana and blacks with heroin, and then criminalizing both heavily, we could disrupt those communities. We could arrest their leaders, raid their homes, break up their meetings, and vilify them night after night on the evening news. Did we know we were lying about the drugs? Of course we did.”

In the new ACLU/DPA poll, 65% of those surveyed said they agreed the U.S. should pull out of the War on Drugs. And 66% support “eliminating criminal penalties for drug possession and reinvesting drug enforcement resources into treatment and addiction services.”

The poll also found that a substantially larger number of U.S. voters (83%) believe the drug war has failed. This notion cuts across party lines and is shared by liberals and conservatives alike. Segmented by party affiliation, 83% of Democrats, 85% of independents, and 82% of Republicans call the drug war a total failure.

Udi Ofer, director of ACLU’s Justice Division, said in the press release accompanying the poll results: “On this 50th anniversary of the drug war, President Biden must make good on his campaign promises and take steps to begin dismantling the system of over-policing and mass incarceration that is endemic to the war on drugs,”

In addition, the survey found that 64% of Americans support repealing mandatory minimum sentences in drug-related cases, 61% support commuting sentences for those types of convictions, and 63% said drug use should be treated as a public health problem, not a criminal matter.

“It’s time to adopt a new approach that treats substance use as a public health issue rather than a criminal justice one,” Ofer said. “The Biden administration can make headway in ending this harmful and racist war by commuting the sentences of people incarcerated in federal prison for drugs. Doing so will help reduce the problem of mass incarceration and the over-policing of Black and Brown communities in the United States.”

Biden has expressed support for ending incarceration for low-level drug cases, saying “nobody should be going to jail for the use of drugs” and the country should “change the way we deal with all drug abuse.”

ACLU and DPA plan to jointly conduct a media campaign next week to demand that the Biden administration “begin dismantling the drug war by commuting the sentences of people incarcerated in federal prison for drugs.”

I’ve just described trends that are generating tailwinds for publicly traded marijuana companies. Looking for ways to profit from the robust momentum of cannabis investments? Click here for our free report.