The first six months of 2021 are coming to a close and it’s been an eventful period for marijuana investors. I typically eschew sports metaphors, but sometimes they’re apt. Here’s a “halftime report” for cannabis in the United States.

Conversely, 93 million Americans (28% of the U.S. population) live in states where possession and use of cannabis remain illegal. These culturally conservative states are proving to be stubborn holdouts against the legalization wave.

Take a look at the following infographic, courtesy of the marijuana research firm New Frontier Data: 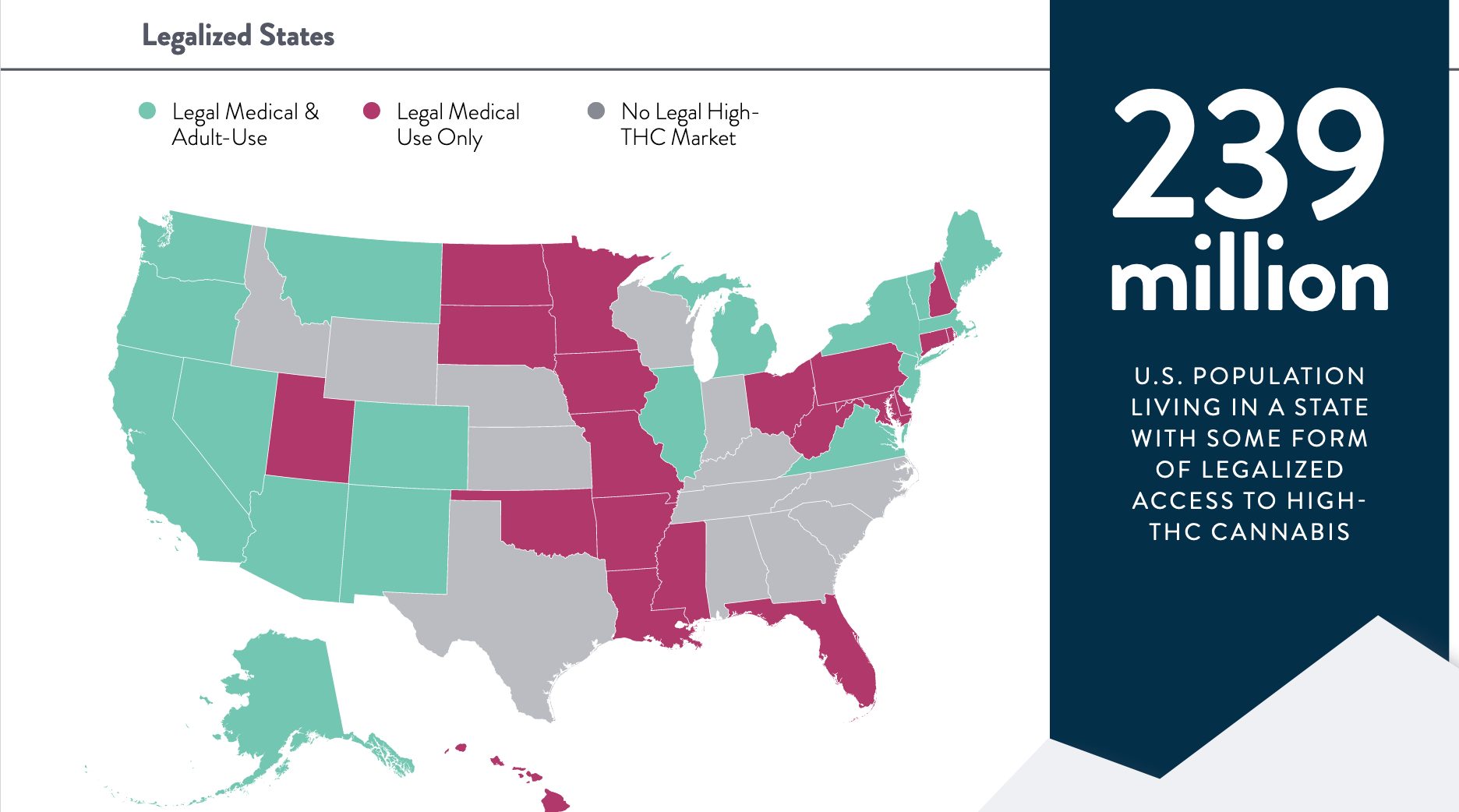 Quarterly sales across legal medical and adult-use states reached an all-time high in Q1 2021 of $5.84 billion, with sales for Q2 2021 projected to exceed $6 billion.

Total combined sales of cannabis across legal state markets crossed the $20 billion threshold for calendar year 2020. With new legal markets expected to get launched over the next two years, total legal sales are projected to grow at a compound annual growth rate (CAGR) of 16%, to reach $43 billion by 2025.

According to the New Frontier mid-year update:

“There are eight states with strong likelihood to legalize adult-use cannabis in the next 48 months, and 10 states with strong likelihood to legalize cannabis for medical use. Passage of medical-use legalization in those 10 markets would bring legal medical cannabis access to an additional population of nearly 80 million Americans for the very first time, of which an estimated 8.4 million are already consuming cannabis on a regular basis.”

Accordingly, marijuana stocks have been soaring. The marijuana industry benchmark exchange-traded fund Amplify Seymour Cannabis ETF (CNBS) has crushed the SPDR S&P 500 ETF Trust (SPY) year to date, 52% versus 13.7% respectively (as of market close June 16). Marijuana stocks are on track to continue their ascendancy in the second half of 2021.

Several marijuana legalization bills are pending in Congress. The most important piece of legislation is the Marijuana Opportunity, Reinvestment and Expungement (MORE) Act, which would federally deschedule cannabis. MORE passed the U.S. House but it’s yet to be scheduled for a vote in the Senate.

Regulatory bodies are taking action ahead of Congress. Notably, the U.S. Food and Drug Administration (FDA) this week posted a budget overview showing that it plans to spend $5 million in fiscal year 2021 for “Cannabis and Cannabis Derivatives Activities.” Moves by the FDA and the states should put pressure on the Senate to at least vote on the MORE Act in the coming weeks.

But to cash in on the green rush, you don’t have to wait for the squabbling politicians in Washington to get their act together. Looking for ways to profit from marijuana’s new momentum? Click here for our free report.