A Supreme Moment for Pot

Long before Saturday Night Live and social media memes, there was Rowan & Martin’s Laugh-In, a weekly television sketch show that ran from 1968-1973 (a young Lorne Michaels was a staff writer). The title of the hugely popular comedy show was a play on the 1960s counter-culture terms love-in, sit-in, and be-in. As a kid, I never missed an episode.

A recurring catchphrase on Rowan & Martin’s Laugh-In was “Here comes da judge!” It was uttered by Sammy Davis Jr., playing a narcotics-friendly hipster judge, in judicial wig and robes, who often slipped in a few marijuana jokes while pronouncing “sentence.” (Edgy stuff for TV of that era.)

I thought of that fictional judge, when I saw the remarkably pro-marijuana statements released on June 28 by (of all people) Supreme Court Justice Clarence Thomas.

Thomas is known for being a hard-right social conservative, so his liberal sentiments about cannabis made me sit up and take notice. While the Supreme Court declined to take up a new case about an Internal Revenue Service investigation into tax deductions claimed by a Colorado marijuana dispensary, Thomas took it upon himself to issue a statement in relation to the case that more widely addressed the federal ban on cannabis (see screenshot). 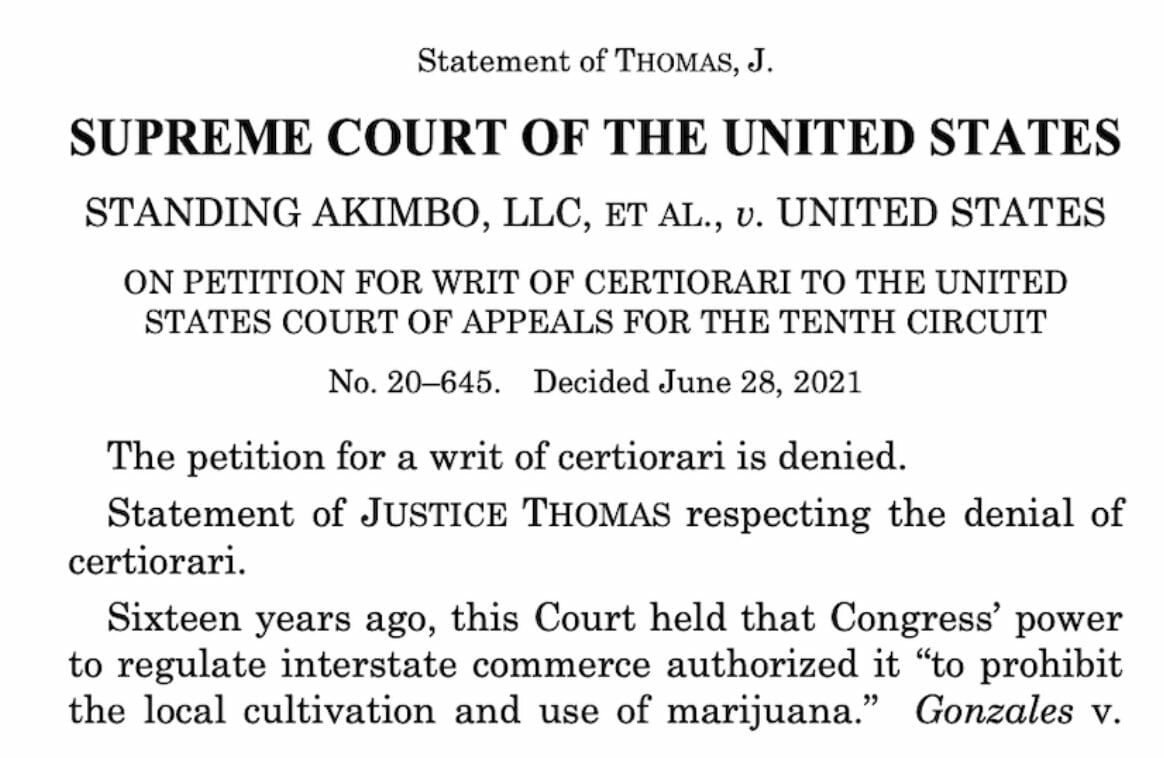 Thomas specifically discussed a ruling in Gonzales v. Raich (2005), whereby the high court decided that the federal government could enforce prohibition against cannabis cultivation that took place wholly within California based on the court’s authority to regulate interstate commerce.

High times find a friend on the high court…

“Whatever the merits of Raich when it was decided, federal policies of the past 16 years have greatly undermined its reasoning. Once comprehensive, the Federal Government’s current approach is a half-in, half-out regime that simultaneously tolerates and forbids local use of marijuana.

This contradictory and unstable state of affairs strains basic principles of federalism and conceals traps for the unwary…though federal law still flatly forbids the intrastate possession, cultivation, or distribution of marijuana…the Government, post-Raich, has sent mixed signals on its views.”

Thomas added that Congress has consistently approved a spending bill rider that prohibits the U.S. Department of Justice from using its funds to interfere in the implementation of state-level medical marijuana programs. He went on to write:

“Given all these developments, one can certainly understand why an ordinary person might think that the Federal Government has retreated from its once-absolute ban on marijuana…One can also perhaps understand why business owners in Colorado…may think that their intrastate marijuana operations will be treated like any other enterprise that is legal under state law.”

The centerpiece bill in Congress for the normalization of marijuana laws is the Marijuana Opportunity Reinvestment and Expungement (MORE) Act. Introduced in the House in mid-2019, MORE passed a full floor vote in December 2020, making history as the first bill to pass in Congress that lifts the federal ban on pot.

MORE remains stuck in the 50-50 Senate, as Democrats continue to squabble with Republicans. But…here comes da judge! Sentiments such as those expressed by Clarence Thomas, an arch-conservative and darling of Republican causes, adds further pressure for bipartisan action on MORE. Passage of the bill would provide a multi-year tailwind for marijuana equities.

Read This Story: 12 Criteria for Picking The Right Pot Stock

In his June 28 statement, Justice Thomas also pointed to a concomitant consequence of federal prohibition, which is the inability of many state-legal marijuana businesses to gain access to financial services, forcing them to operate on a mostly cash-only basis.

That’s a key argument in favor of a separate bill also stuck in Congress, the Secure and Fair Enforcement (SAFE) Banking Act, which would prevent the feds from penalizing banks that do business with canna-businesses.

The developments I’ve just described underscore the appeal of the marijuana industry as an investment. If both liberals and conservatives are joining hands on pot, you know it faces an enormous upward growth trajectory. For our latest research on the best pot stocks to own now, click here.