Third Reich big shot Hermann Goring liked to say: “When I hear the word culture, I reach for my revolver.”

So, too, when I hear the word “synergy.”

The future promise of synergies is often used by management consultants, financial wheeler-dealers, and top corporate leaders as disingenuous justifications for mergers and acquisitions (M&A).

All too often, the real result is the merging of two inherently weak companies, or an excuse for the new entity to myopically gut internal resources and lay-off workers to temporarily boost shareholder returns.

However, sometimes synergy is a legitimate byproduct of consolidation. Just because the term is misused doesn’t mean it’s invalid. And that’s what I’m seeing in the marijuana industry right now: a lot of healthy synergies that impress even a skeptic like me.

Deal-making among canna-businesses has reached a torrid pace in 2021, providing opportunities for investors who can pinpoint the next big opportunities. (As I explain below, we’ve done the homework for you.)

The main motivator behind these marijuana company marriages is the ability to take advantage of economies of scale. Through mergers, marijuana companies can lower costs by eliminating redundant operations and employees, even as they can squeeze better deals out of suppliers and providers by virtue of their size.

What’s more, by purchasing the smaller purveyors, brand name consumer giants with conventional products immediately obtain new marijuana offerings, without having to develop these products from scratch. The smaller fry, in turn, get instant access to a vast, well-established supply and retail infrastructure.

A shrewd way to capitalize on these trends is to find companies on a probable path to M&A activity and invest in them before the news becomes official, to profit from their future momentum. As they say on Wall Street: “Buy on the rumor, sell on the news.”

The maturation of Marijuana, Inc.

The dictionary tells us that “synergy” is a noun that means: “The interaction or cooperation of two or more organizations, substances, or other agents to produce a combined effect greater than the sum of their separate effects.”

Why is synergy becoming the Holy Grail of marijuana company managers? For answers, you have to go back to the dawn of the legal marijuana industry in the late-1990s.

The “green rush” traces its origins to 1996, when the voters of California agreed to allow patients and their caregivers to possess and cultivate marijuana for therapeutic purposes. The for-profit marijuana industry sprang to life in the Golden State and soon spread to other states that jumped aboard the legalization bandwagon.

Back then, fledgling entrepreneurial start-ups in the cannabis realm were in large part operated by amateurs with little corporate or financial experience. Armed with small budgets and few places to find capital, these small-cap enterprises quickly racked up debilitating debt. They over-promised and under-delivered. After a lot of initial fanfare, many went belly up. Early investors got left holding the bag. This boom-and-bust cycle has repeated itself with regularity, right up to the big shake-out in late 2019.

However, through this trial-and-error crucible, a mature industry eventually evolved. The businesses that survived learned tough lessons that held them in good stead, as legalization became more prevalent and consumer demand burgeoned. The survivors were leaner, fitter and wiser. Investors in quality companies got rich. Sure enough, this year marijuana stocks as a whole have soared and outpaced the S&P 500.

The next step in this evolution: consolidation. The M&A activity that has accompanied the maturation of the marijuana industry has been particularly prevalent in 2021, as marijuana equities soar in value and cash-rich companies seek places to deploy their resources.

Take a look at the following chart, which depicts the total worth of U.S. and Canadian marijuana M&A transactions, from the first quarter 2019 to the end of the first quarter of 2021. As you can see, North American activity has been robust and it’s dominated by the United States: 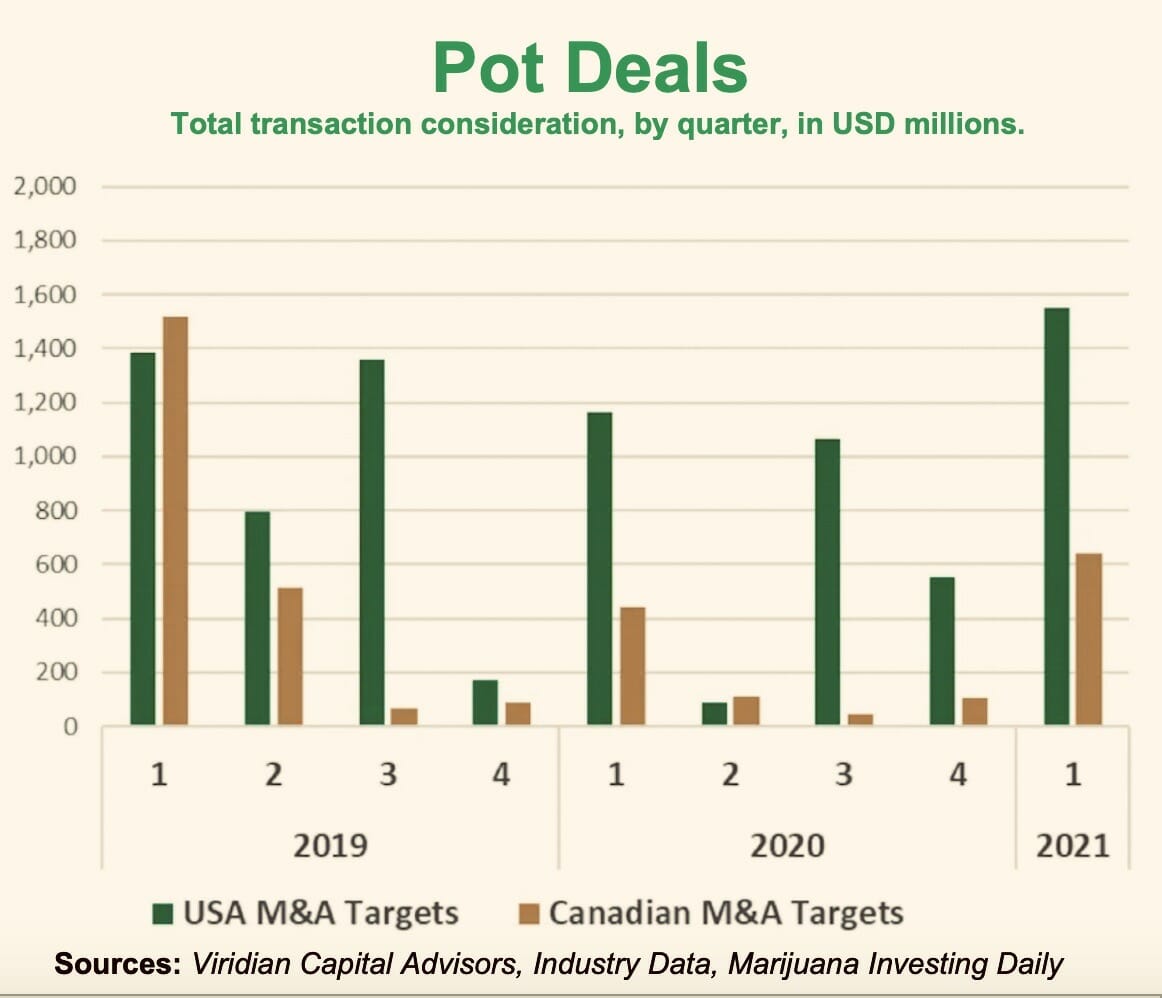 Global mega-cap food and beverage conglomerates have stepped into the fray, gobbling up small and promising marijuana companies like a game of PacMan. Notable examples include Constellation Brands (NYSE: STZ) and its growing stake in Canopy Growth (NSDQ: CGC), and Altria Group’s (NYSE: MO) acquisition of Cronos Group (NSDQ: CRON).

Companies in the consumer foods, health services, and cosmetics industries are increasingly infusing their products with marijuana. Acquiring a small local or regional brand is a fast way to accomplish this goal. 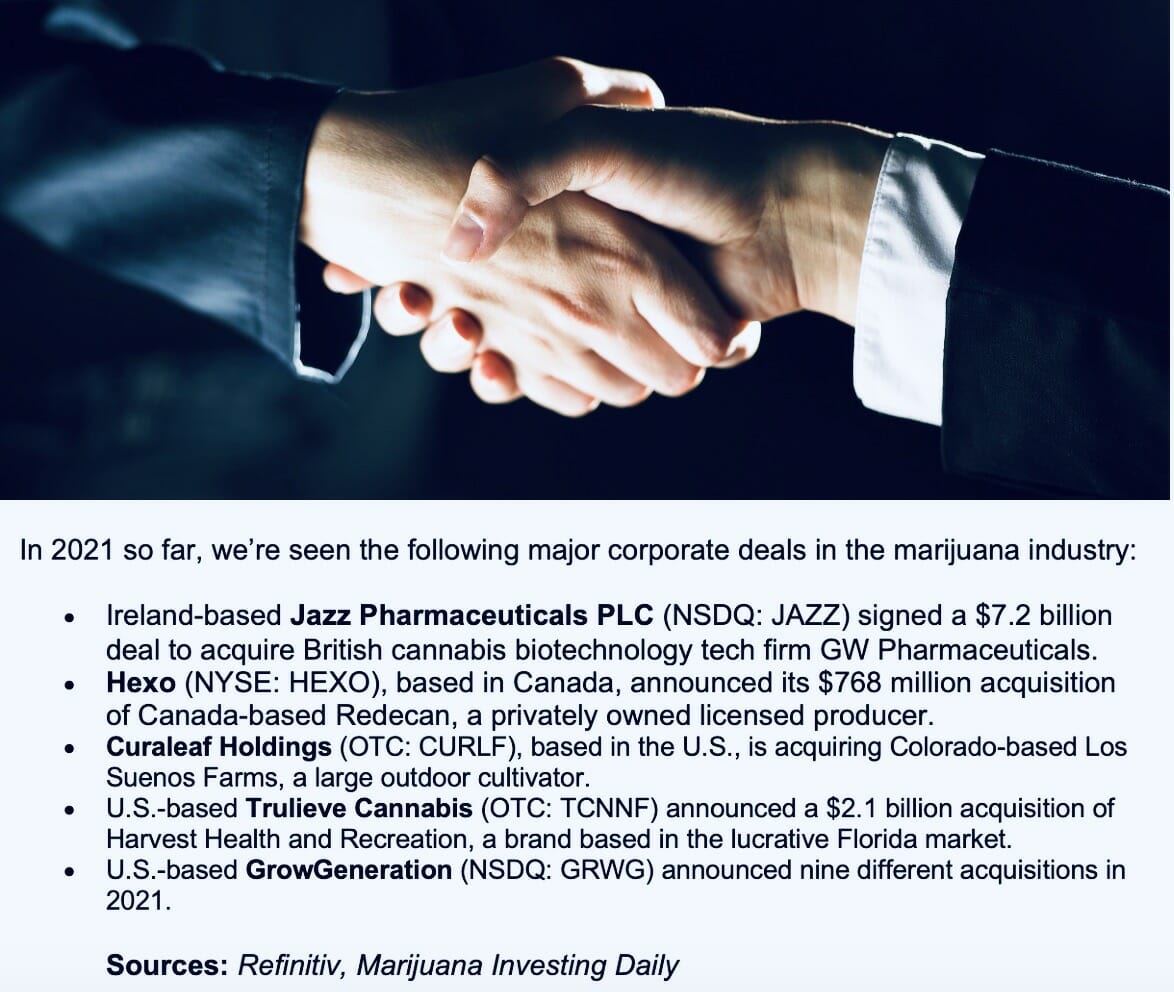 More deals are to come. Marijuana M&A activity is expected to break records this year, especially as companies seek financing outside of the normal banking channels that deny them access because of the federal ban on pot.

These trends were hastened by the coronavirus pandemic, which made it necessary for marijuana companies to join forces simply to survive. Social distancing and pandemic-induced emotional stress also generated a surge in marijuana sales.

Now that the pandemic is waning, these newly merged corporate entities are poised to thrive amid the accelerating economic recovery.

Are some marijuana M&A deals ill-advised? Yes, without a doubt. Are they doomed to fail? Yes, again. But not all of them. As a retail investor, the key is knowing the difference. That’s where our investment team comes in.

Our seasoned analysts are keeping a close eye on new opportunities in the thriving marijuana sector. We’ve pinpointed cannabis plays that could get swept up in the next wave of mega-deals. If you’re looking for a future cannabis windfall, click here for details.