Reading history sometimes gives me fanciful ideas. When Alexander the Great wept by the riverbank in the fourth century BC because there were no more worlds to conquer, maybe he would have been consoled with an online trading account. Because in this century’s digitally interconnected economy, investors can conquer any corner of the world.

According to the World Bank, the United States accounts for about 55% of the world’s stock market value. That means 45%, or more than $40 trillion, resides overseas. In fact, 80% of the world’s publicly traded companies are foreign based, compared with 20% headquartered in the U.S.

As the global economy roars back to life, make sure your portfolio is internationally diversified. If you don’t have exposure to overseas equities, you’re leaving a lot of money on the table. Below, I’ll steer you toward a key international opportunity.

Overseas stock indices generally closed higher as well on Wednesday, including those for Europe and Asia. Crude oil prices surged.

As of this writing, the rally lives on. In pre-market futures contracts Thursday, all three U.S indices were trading in the green. After a brief scare from headlines about the COVID Delta variant, investors have calmed down and decided to focus on the good news, of which there is plenty.

Read This Story: From Fear of COVID to…Fear of Missing Out

It’s not just the U.S. economy that’s thriving. Growth is returning to the pandemic-battered world. Many analysts are betting that the Delta variant won’t do much to dent global growth projections. But in the meantime, international diversification offers a cushion against U.S.-centric bad news. Asia, for example, got a handle on the pandemic earlier than most regions, which will pay off in the form of faster economic recovery.

On July 19, research firm FactSet released its Geographic Revenue Exposure data, based on the most recently reported fiscal year data for each company in the S&P 500 index. For this analysis, FactSet divided the index into two groups: companies that generate more than 50% of revenue inside the U.S. and companies that generate more than 50% of revenue outside the U.S. Aggregate revenue growth rates were then calculated based on these two groups. 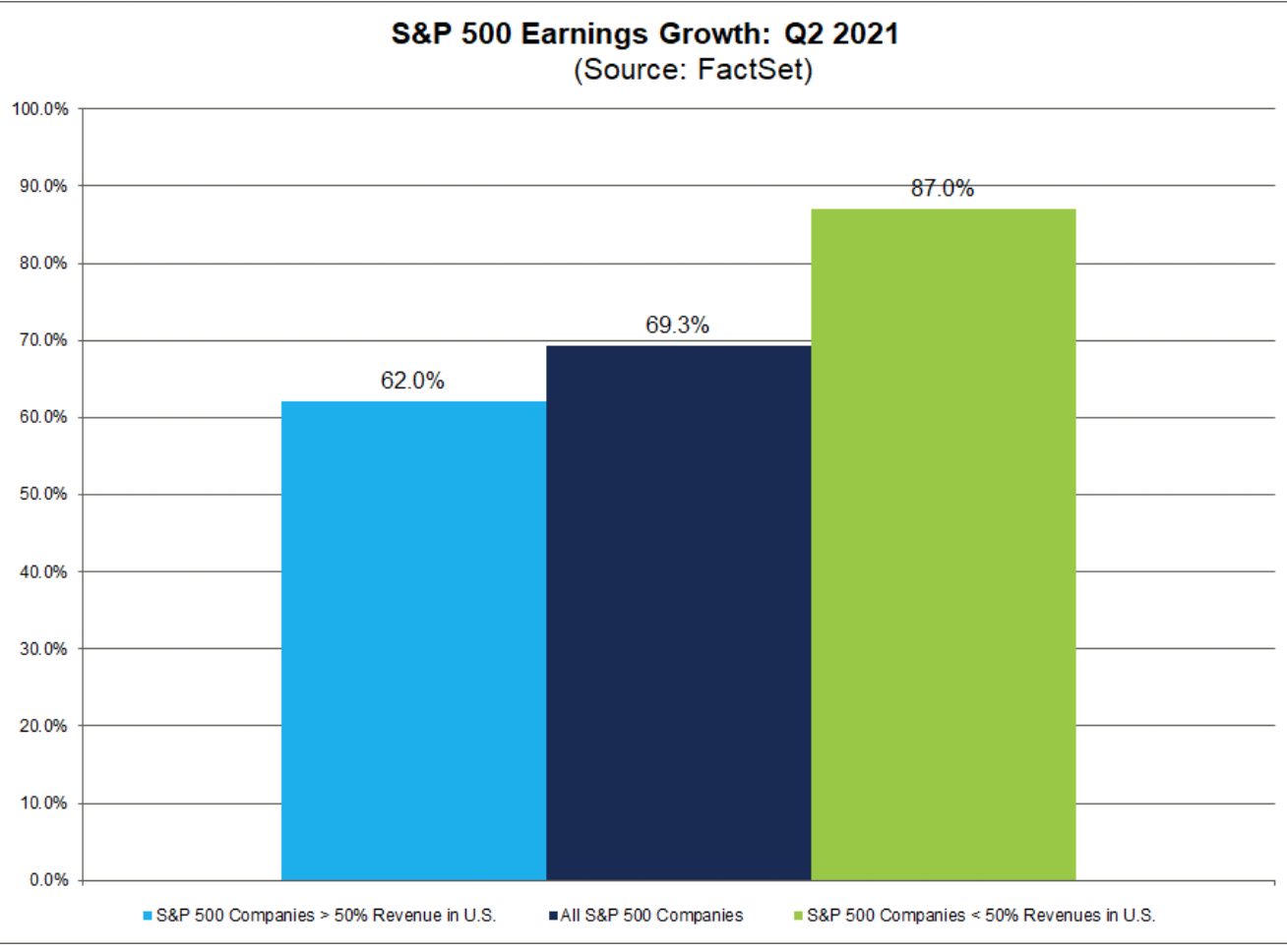 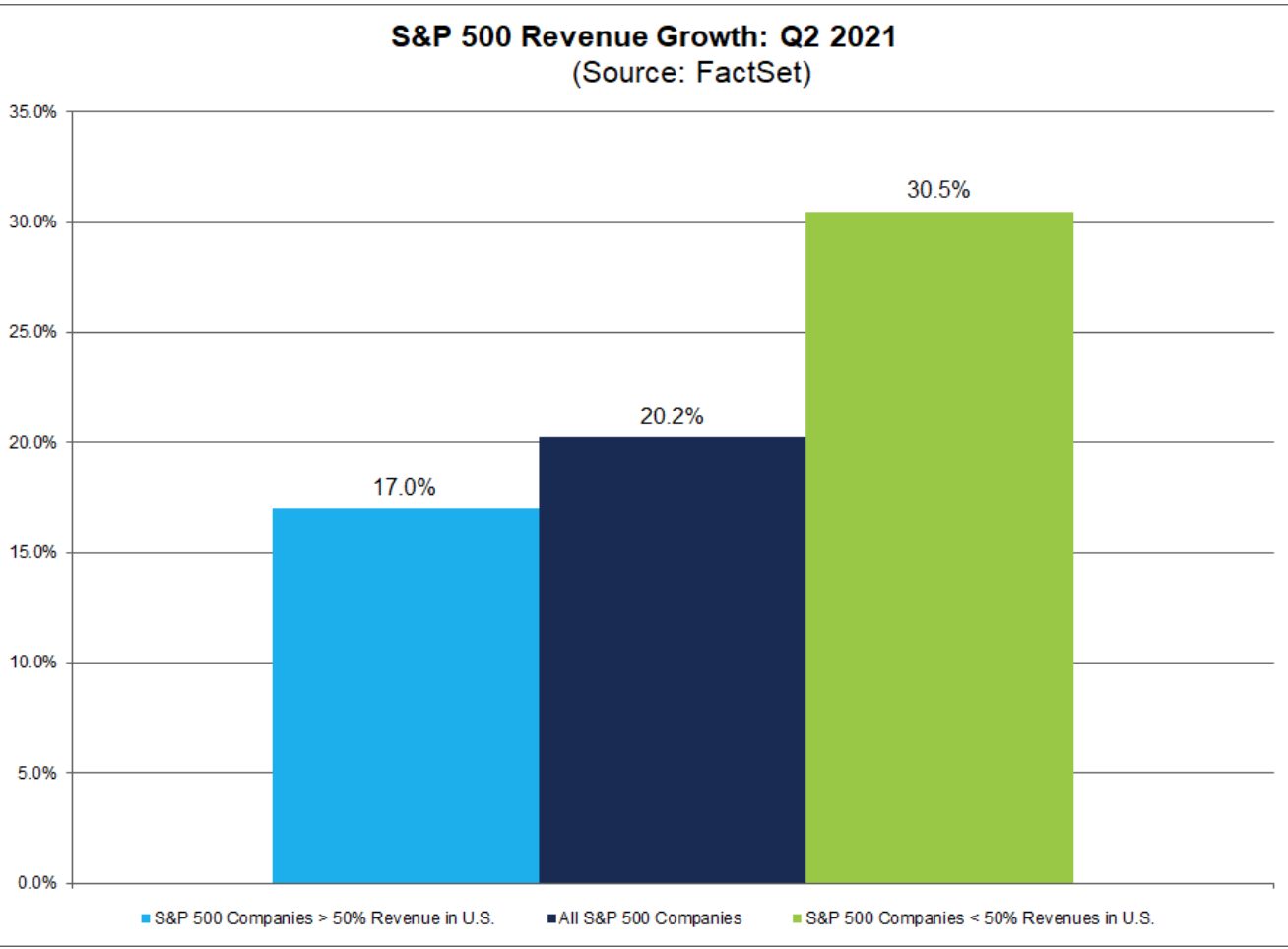 That means international stocks are sources of bargains right now. This year, their prices should gradually catch up with their fundamentals.

In tandem with global growth has been the rise in commodities prices, as producers (especially those based in Asia) show a ravenous appetite for raw materials to meet consumer demand.

The world’s growth engine, China, is expected to rack up GDP growth of 8.2% in 2021, a blistering pace that will fuel sustained demand for copper, iron ore, aluminum, lithium, and the other building blocks of our modern age.

The Investing Daily team has found an under-the-radar mining company, located in a remote part of the world, that’s sitting on a $34 billion treasure trove of minerals. This investment is yours for the taking. For details, click here now.