Retail Sector: Confidence Is Everything

Consumers are feeling more confident than since the onset of the coronavirus pandemic 18 months ago. So says The Conference Board, in its monthly survey of how good (or bad) Americans are feeling about their jobs and financial security.

In particular, survey respondents said they are feeling better about overall business conditions and the strength of the labor market. As a result, the Consumer Confidence Index (CCI) increased slightly to 129.1. That is its highest level since recording 132.6 in February 2020.

Escalating consumer confidence is a good thing for the stock market. That’s because more people are buying big-ticket items like houses and cars. In turn, most sectors of the economy strengthen as increased commerce spurs demand for most consumer goods.

There is a high, positive correlation between the CCI and the overall direction of the stock market. That is why I commented on a reversal in consumer confidence last October, turning positive after dropping over the previous two months.

Rising consumer confidence is especially good for the retail sector. That is why I compare the SPDR S&P Retail ETF (XRT) to the CCI to see if they are in sync with one another.

When they are not, as was the case 10 months ago, that usually means one or the other is about to reverse direction. And when that happens, you can make a lot of money if you guess correctly which one that will be.

I guessed correctly 10 months ago. I said then, “If you trust the CCI results then right now should be a good time to gamble on retail stocks before their Q3 results have been released.”

I went on to say, “If you are feeling especially frisky, you could buy call options on XRT. A call option increases in value as the price of the underlying security rises.”

The call option trade I recommended then, buying the $46 strike price on XRT that expired on January 15, quadrupled in value in less than three months.

Since then, XRT has risen by nearly a third as retail stocks soared. Over the past 12 months, it has more than doubled in value. 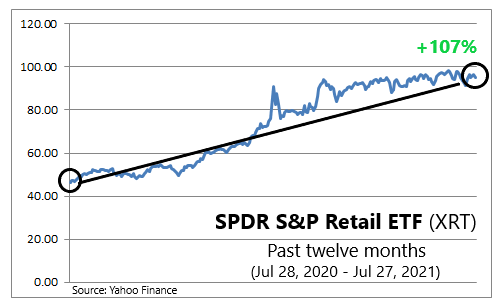 XRT’s top three holdings, Stamps.com (NSDQ: STMP), Carvana (NYSE: CVNA), and Revolve (NYSE: RVLV), are all up at least 50% this year. What was a bargain last October now appears fairly valued to me.

For that reason, I would not be a buyer of call options on XRT at their current prices.

What I might buy instead is put options on XRT. A put option increases in value when the price of the underlying security goes down.

In this case, both the CCI and XRT have been trending in the same direction for several months. There is no empirical data to suggest that one or the other is about to reverse direction.

That is why put option premiums for XRT are relatively cheap to buy right now. For example, the put option that expires on January 21 at the $95 strike price was selling for $8 last week.

For that trade to be profitable, XRT would have to fall by roughly 9% over the next five months. That could easily happen if the Delta variant of COVID-19 forces many states to once again close down stores.

But if the virus does not interfere with the economy over the second half of this year, XRT could climb higher. Consumers have a lot of money to spend and they want to spend it now.

I don’t know what it will take for consumer confidence to change direction. Perhaps some sort of geopolitical event will roil the global economy for a while. Perhaps not.

In that regard, making this type of trade would be little more than gambling. If you guess right, you could easily double your money. Guess wrong, and you lose everything.

That’s a good way to lose a lot of money. Instead, we prefer taking a long-term view of the global economy so we can accurately predict which sectors will grow the fastest.

The deteriorating infrastructure currently getting addressed by Congress is a global problem, which makes infrastructure spending an investment trend with multi-year momentum. That’s a tailwind for commodities.

As the world economy displays a voracious appetite for raw materials, a certain “miracle metal” has emerged as an outstanding commodity play, To learn more about this ultra-versatile metal and how to profit from it, click here now.