Why Another Company Is Cheering Biogen’s Big Win

It approved Biogen’s (NSDQ: BIIB) aducanumab, brand name Aduhelm. This was the first time ever that an Alzheimer’s drug has been approved.

Does Lilly have a stake in Aduhelm and will it make money when the drug hits the market?

The Holy Grail of Drugs

Before we discuss the case further, a little background on Alzheimer’s and Aduhelm.

According to the Centers for Disease Control and Prevention, 5.8 million Americans are living with Alzheimer’s. By 2060 that number may reach 14 million. It is no exaggeration to say that an Alzheimer’s drug that works can surpass $10 billion a year in sales.

Many drug companies have tried to develop an Alzheimer’s drug over the years. But until this year, all had failed. That’s why the Alzheimer’s drug has been referred to as the holy grail of drug development.

In early 2015, Biogen got everyone’s hopes up when it announced that aducanumab had shown evidence of reducing the buildup of plaque in the brain associated with Alzheimer’s. The drug jumped directly into Phase 3.

But four years later, in March 2019 Biogen dropped a bombshell on investors. It said that due to disappointing data in one of its two Phase-3 study, it was pulling the plug on aducanumab.

However, in another twist, just six months later Biogen says…not so fast! Apparently, in examining data from the second Phase-3 study, it saw some evidence that aducanumab works well enough to try to apply for FDA approval.

In November 2020, an independent FDA panel of experts voted almost unanimously that the clinical data did not support approval. The panel’s vote isn’t binding but it poured cold water on aducanumab’s prospects.

Because of the desperate need for an Alzheimer’s treatment, though, the FDA said “yes” anyway to a drug that may work.

In reaction, three members of the expert panel resigned in protest.

The FDA does require that Biogen and its partner Eisai run a follow-up study. They must complete another study by 2029 to prove the drug brings clinical benefit, or else the FDA could remove the drug from the market.

Lilly is also working on an Alzheimer’s drug, donanemab. The drug works similarly, but not identically, to aducanumab. It’s currently in Phase 2 study.

By this point, you may have already guessed why the market thinks the Biogen approval helps Lilly.

You see, the approval of aducanumab despite questionable statistical evidence lowers the bar for donanemab, too. Donanemab’s data has been good so far but not a slam dunk. However, the clinical profile is at least as good as, if not better than, for Aduhelm, raising chances of approval. Thus, even though Aduhelm is a competitor to donanemab (if it’s approved), Aduhelm’s approval on balance helps Lilly.

Further in Lilly’s favor, shortly after the Aduhelm approval, the FDA granted Breakthrough Therapy designation to Lilly’s own Alzeimer’s drug, donanemab. Lilly announced plans to file for FDA approval of donanemab this year under the accelerated approval pathway, based on the strength of Phase 2 data even though a Phase 3 study is still ongoing. 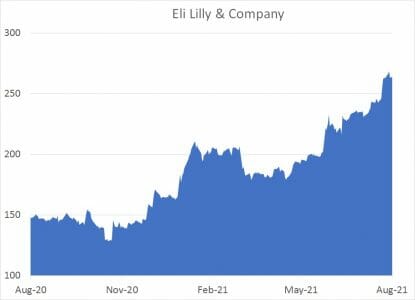 This is great news for Lilly and shareholders alike. The FDA’s controversial Aduhelm approval not only increased the odds for approval of donanemab, it could shorten donanemab’s time to market, making it a major revenue contributor earlier than expected. And the sooner donanemab is commercialized, the less time Aduhelm, with its inherent first-mover advantage, would have to (potentially) entrench itself.

Donanemab, if approved, would no doubt be a blockbuster (defined as yearly sales of $1 billion or more) with an outside shot at reaching $10 billion at its peak. Lilly’s fiscal 2020 revenue was $23 billion, showing what a huge impact donanemab might make.

Unlike Biogen, which needs Aduhelm to turn its falling sales around, Lilly’s sales already are growing even without donanemab. Thus, an Alzheimer’s drug would add (a big) icing on the cake.

The lesson here is that when investing in drug companies, it is a good idea to keep tabs on what competitors are doing. Sometimes, a favorable development for a competitor may not be necessarily a bad thing for you.

The team at Investing Daily has unearthed a trailblazing marijuana biotech that’s on the verge of becoming “The Pfizer of Pot.” Click here for details.