Betting on a Best Buy Breakout

When I became chief investment strategist of Personal Finance six years ago, one of the first stocks I added to the publication’s Growth Portfolio was electronics retailer Best Buy (NYSE: BBY). At that time, BBY was struggling to gain traction due to fears that e-commerce giant Amazon.com (NSDQ: AMZN) would soon put it out of business.

One year later, I noted the company’s reversal of fortune as Best Buy methodically evolved its business strategy to better compete with Amazon. Now, there is no doubt that the company will not only survive the Amazon threat but is stronger as a result.

Just how much stronger Best Buy has become is evident by its fiscal 2021 second quarter (ending July 31) results. On August 24, the company announced that it grew its generally accepted accounting principles (GAAP) diluted earnings per share (EPS) by 74% during the quarter versus last year.

At the same time, Best Buy raised its guidance for full-year enterprise comparable sales growth to a range of between 9% and 11%. The company’s prior guidance was for an increase of 3% to 6%.

As you might expect, the stock market liked that news. That morning, BBY jumped 6% and has more than tripled in value since I added it to the PF Growth Portfolio in March 2015. 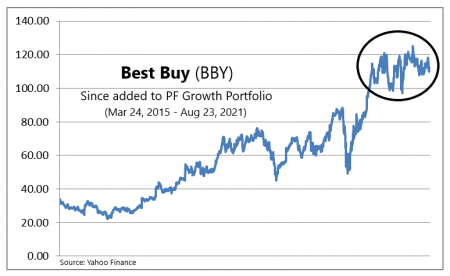 Despite its recent bump, BBY is still trading beneath its all-time high share price above $128 achieved earlier this year. In fact, it is only back to where it was last October (circled area in the chart above).

Last year’s outbreak of the coronavirus pandemic turned out to be a blessing for Best Buy. At first, its share price plunged during the panic that ensued when its stores began shutting down.

But once it became apparent that Best Buy could quickly convert much of its customer traffic to online sales, its share price took off. After bottoming out beneath $50 in March 2020, BBY doubled in value over the next four months.

Since then, BBY has traded in a range while the rest of the stock market has taken off. It appears that Wall Street believes that the lift from the pandemic for Best Buy was temporary and will not carry through into next year’s results.

Similar to six years ago, I once again find myself questioning the logic of Best Buy’s naysayers. If the company has proven anything, it is that it is remarkably adept at responding to existential threats such as Amazon and the pandemic.

A quick look at Best Buy’s price/earnings-to-growth (PEG) ratio reveals the culprit behind the stock’s tepid performance recently. A PEG ratio below 1.0 means that a company has been able to grow its EPS at a faster rate than the stock market is valuing them.

In the case of Best Buy, its PEG ratio of 5.8 suggests that it will not be able to grow earnings fast enough to justify its current share price. For context, the weighted average PEG ratio for the S&P 500 Index is roughly 1.3.

Best Buy’s PEG ratio implies a future earnings growth rate of less than 3%. That may be true over the remainder of this year compared to last year’s unusual numbers, but I doubt that will be the case once we get into next year.

For that reason, buying a call option on Best Buy may be the best way to play a breakout from its trading range. A call option increases in value when the price of the underlying security goes up.

Last week while Best Buy was trading near $120, the call option that expires on January 21 at the $125 strike price could be bought for $6. For that trade to be profitable, BBY would need to rise above $131 within the next five months.

If you think a 9% rise in BBY over that span is unlikely, consider this: Walmart (NYSE: WMT) and Target (NYSE: TGT) are both valued at more than 20 times forward earnings. That means Best Buy could appreciate 25% and still be cheap compared to either one of those two retailers.

However, if options trading isn’t for you, our investment team has just pinpointed another growth stock that belongs in any portfolio.

This firm is the world’s only producer of a rare, miracle material that’s essential for biological medicine, the Internet of Things, aeronautics, autonomous vehicles, microchips, 5G telecommunications…you name it.

The time to invest in this company is now, before it starts getting widespread coverage by the financial media and its share price soars. Click here for details.