The Remote Economy (and Zoom) Hit a Wall

At the onset of the coronavirus pandemic 18 months ago, I identified Zoom Video Communications (NSDQ: AM) as a beneficiary of the remote economy. At that time, ZM was trading above $110 after starting the year below $70.

Ordinarily, a 60% gain in just 10 weeks is about as good as it gets. In fact, that was only the beginning of an astonishing run for Zoom.

On October 19, ZM closed above $568 for a 727% gain in less than a year. That was shortly before several drug manufacturers announced they had developed successful COVID-19 vaccine treatments. 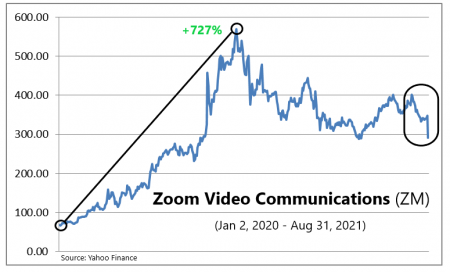 Since then, it has been all downhill for Zoom. At the start of this week, ZM was down nearly 40% from its October high. And that was BEFORE its big plunge on Tuesday after the company released its fiscal year 2022 second quarter (ending July 31) results.

That morning, ZM opened 18% below where it closed the day before. At that point, Zoom was worth less than it was a year earlier.

You might think that Zoom’s quarterly results were pretty awful. In fact, the company reported a 54% jump in year-over-year revenue for the period.

The number of customers generating more than $100,000 in annual sales more than doubled during the quarter. It was also the company’s first quarter with more than one billion dollars of total revenue.

So why the big drop in Zoom if the most recent quarterly numbers were so good? The problem is what is likely to happen over the next several quarters.

Many large businesses have announced that they expect their employees to start coming back into the office after Labor Day. At the same time, most school systems are reopening with students and teachers reluctantly trudging back into the classrooms.

In short, a lot of the people that have been using Zoom the most will need it the least. It served its purpose while everyone was stuck at home, but those days will soon be coming to an end.

The company admitted as much in the forward guidance it provided. Zoom is expecting a slight decline in total revenue for the quarter for the first time since the onset of the pandemic.

Zoom believes that it will end this year with non-GAAP diluted earnings per share (EPS) of no more than $4.79. Even at a reduced share price of $290, that works out to a forward price/earnings ratio (FPER) of a little about 60.

That is nearly triple the FPER for the S&P 500 Index. That would be fine if Zoom was expected to grow its earnings at three times the rate of the index. I wouldn’t bet on it.

Even if the Delta variant of COVID-19 forces another partial shutdown of the economy this fall, it is unlikely that Zoom can continue growing sales and earnings at their recent pace. The past 18 months have been an aberration, not the norm.

Zoom is unusual in that what it does is so specific. Also, there isn’t much opportunity to leverage its massive market share in the video conferencing space into other revenue streams.

That’s why the analysts on Wall Street are having so much difficulty determining a fair value for ZM. What Zoom was worth a year ago during the height of the pandemic bears little relation to what it will be worth a year from now when (hopefully) the pandemic is over.

The coronavirus pandemic caused enormous disruption to the economy. Only now are we beginning to get back to a sense of normalcy.

We aren’t there yet, but already the stock market is looking past the pandemic into next year and beyond. And what it is looking for are companies with products that will be in demand no matter what the circumstances.

Which brings me to a growth stock that belongs in any portfolio.

This firm is the world’s only producer of a rare, futuristic material that’s essential for biological medicine, the Internet of Things, aeronautics, autonomous vehicles, microchips, 5G telecommunications, and other leading-edge technologies. If you want to tap mega-trends that will unfold regardless of the pandemic’s direction, this company fits the bill. Click here for details.