Jump aboard the right initial public offering (IPO) and you could reap fast and big gains. Choose the wrong IPO and you could quickly lose your shirt. In this frothy broader market, it’s difficult to separate the IPO hype from genuine opportunity.

The fear of missing out (aka FOMO) on a ballyhooed IPO can cloud investors’ judgement, prompting them to make poor decisions. As billionaire super-investor Warren Buffett once said about IPOs:

The idea of saying the best place in the world I could put my money is something where all the selling incentives are there, commissions are higher, the animal spirits are rising, that that’s going to be better than 1,000 other things I could buy where there is no similar enthusiasm…just doesn’t make any sense.

The IPO market was red hot in the first quarter of 2021, but it lost a lot of heat in the second quarter. It seems counterintuitive, but I consider that trend to be a bullish sign. Instead of being driven by FOMO, investors are perhaps calming down and making more rational decisions. Rather than bursting, the stock market bubble is deflating a bit.

IPOs were all the rage in the first quarter, with activity on U.S. exchanges soaring. But according to the latest data from research firm FactSet, IPO activity dramatically fell in Q2.

The health of the IPO market indicates investors’ appetite for risk, and the slew of unprofitable companies in the first quarter going public illustrated a sky-high hunger for risk. Now that appetite is diminishing, with a new month underway that’s rife with growing risks.

In pre-market futures contracts Thursday, all four indices were trading in the green. Throughout 2021, I’ve been hearing a lot of financial pundits prattle on about how we face an imminent correction. Hasn’t happened (yet).

That said, September historically is a treacherous month for the stock market, hence the so-called “September effect.”

Since the end of World War II, the S&P 500 has been positive only 45% of the time in September, with an average decline for the month of 0.56%. That makes September the worst of all months. It’s not just U.S. stocks; global equities are susceptible to the September effect as well.

Why? Theories are all over the map. The most plausible reason is seasonal behavioral bias, as the end of summer prompts investors to pocket gains.

Last year in September, with stocks hovering at record highs, the S&P 500 plunged nearly 10% at one point, before bouncing back and resuming its rally. Wall Street pays close attention to these historical precedents, to the point of being superstitious. As September 2021 unfolds, trepidation is creeping into the market.

Wednesday’s mixed close followed a report Wednesday from payroll processor ADP that showed businesses in the U.S. created 374,000 new jobs in August, versus 600,000 expected. As September gets underway, the threat of COVID Delta lurks over the economy and financial markets. 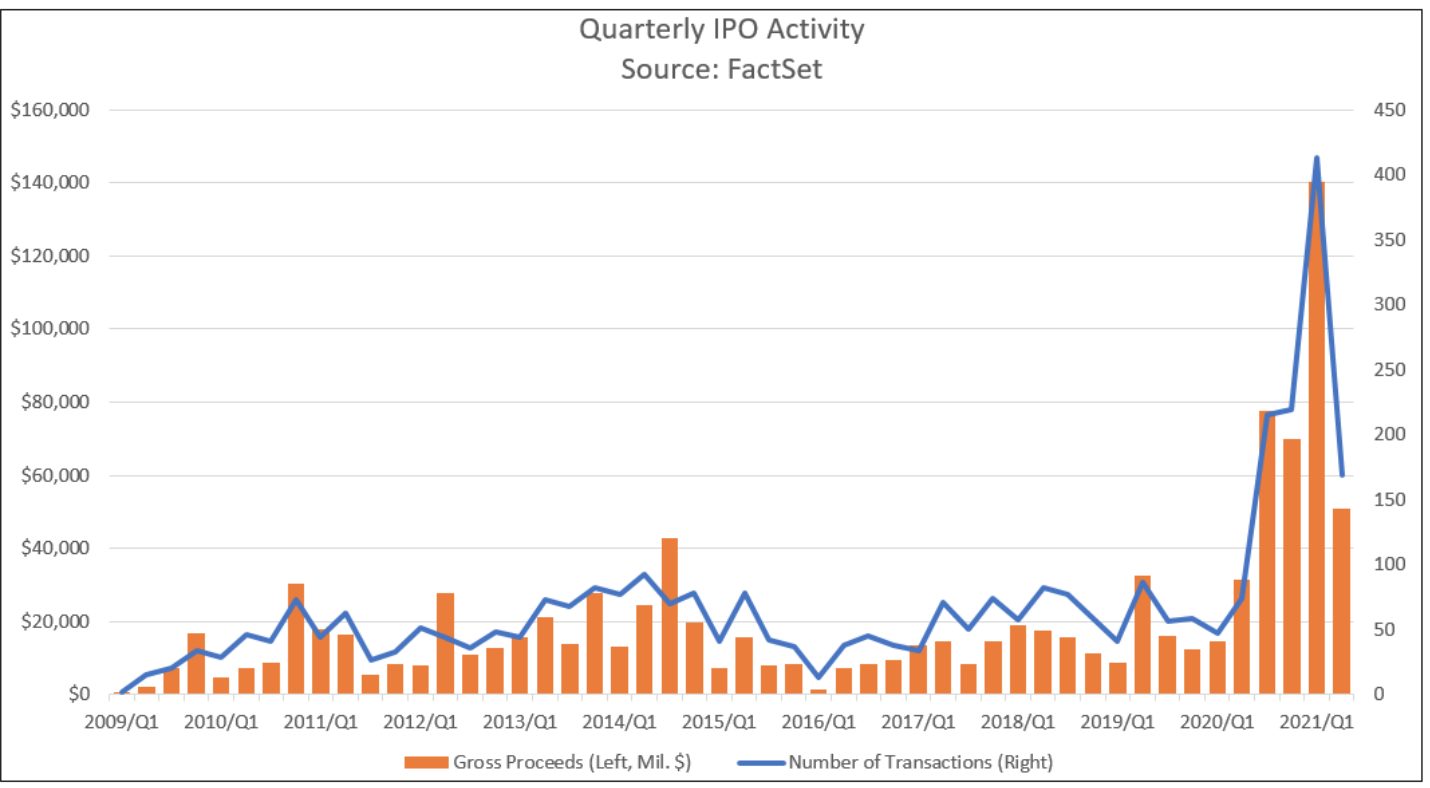 The Q2 plunge in IPOs was driven by a sharp decline in offerings from special purpose acquisition companies (SPACs). There were just 39 SPAC IPOs in the second quarter versus 292 in the first quarter. In Q1, SPACs accounted for 70.7% of all IPOs by volume; in Q2 the share slipped to 23.1%. In Q2 2021, SPAC IPOs raised only $6.8 billion versus $92.3 billion in the preceding quarter.

A SPAC is essentially a shell company created strictly to raise capital through an IPO for the purpose of acquiring an existing company. Subsequently, an operating company can merge with or be acquired by the publicly traded SPAC and become a listed company without going through the regulatory rigors of its own IPO. The sponsors of SPACs typically are wealthy private equity investors.

What does the slowdown in IPO activity portend for the broader market? To me, it’s a clear sign that Wall Street’s mood is shifting toward a risk-off stance, amid the spread of COVID Delta and Federal Reserve “taper talk.”

That change in sentiment, toward cautious optimism, is healthy. The Q1 proliferation of dicey SPACs could be construed as a contrarian indicator that the market was getting frothy. As riskier speculation cools off, the rally stands a greater chance of surviving longer.

It’s worth remembering that during the dot.com bubble of the late 1990s, greedy investors poured money into tech companies that had dubious prospects of ever turning a profit. We saw how that turned out.

Fueling IPOs this year has been the bull stock market and strengthening economic indicators, as well as investors who crave new places to put their money. It also helps that many of the firms that went public in the first quarter have outperformed the S&P 500.

However, not all IPOs are created equal and it’s easy to get burned. Sometimes the most anticipated stock market debuts end up being a waste of time and money, as cold hard reality kicks in and investors get a bad case of buyer’s remorse.

Amid today’s growing risks, you should get cautious, too. But don’t leave money on the table, by turning your back on growth opportunities. In fact, we’ve just pinpointed a growth stock that belongs in any portfolio.

This firm is the world’s only producer of a rare, futuristic material that’s essential for biological medicine, the Internet of Things, aeronautics, autonomous vehicles, microchips, 5G telecommunications, and other leading-edge technologies. Instead of rolling the dice, stick to quality. This company fits the bill. Click here for details.