The Market’s Direction: A Shot in the Dark

President Biden’s “summer of joy” never materialized, due to the unexpected rise of the COVID Delta variant. Rattled consumers have pulled back from spending and jobs growth has slowed, as the highly contagious mutation continues to defy earlier projections that the pandemic would wane.

And yet, underlying fundamentals remain strong. Below, I steer you toward long-term growth opportunities that are positioned to thrive, now and when the pandemic is finally over.

Fueling Delta’s spread is the refusal of a sizeable segment of the population to get vaccinated. The partisan political forces that are influencing these anti-vaxxers is a topic that does not fall under the purview of this column. But science does. The Centers for Disease Control reported last Friday that unvaccinated people are 11 times more likely to die from COVID compared to those who are fully vaccinated.

The fate of the economic recovery and by extension the bull stock market largely rests on whether the vaccination rate significantly accelerates. And this variable is, so to speak, a shot in the dark.

Biden also ordered the Department of Labor to forge a new rule mandating any company with more than 100 employees to require vaccines for their employees, or weekly COVID tests for those who cite religious or health reasons for not getting vaccinated.

The Delta variant is killing more than 1,500 Americans every day, according to the latest data (as of Monday) from Johns Hopkins University.

Biden’s political opponents are seething at the vaccine mandate, portraying it as governmental overreach, but despite the threat of legal challenges from a handful of governors, the mandate appears to be on solid legal ground. 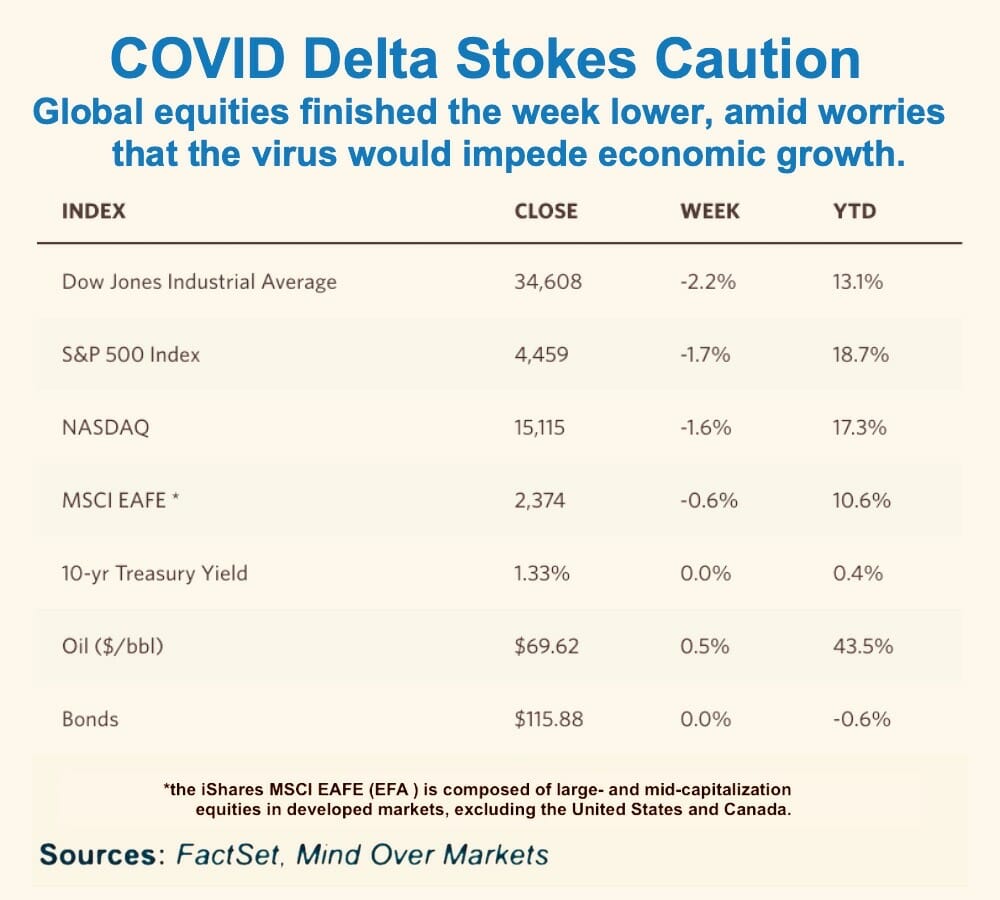 Major U.S. indices are only slightly down for the month of September so far, and only about 1% off their all-time highs. But with the chill of impending autumn, there’s also a hint of fear. We’re entering uncharted territory.

That’s why Biden has staked the economic recovery (and very likely his presidency) on the vaccine mandate. The following chart depicts how many people have received at least one dose of a vaccine: 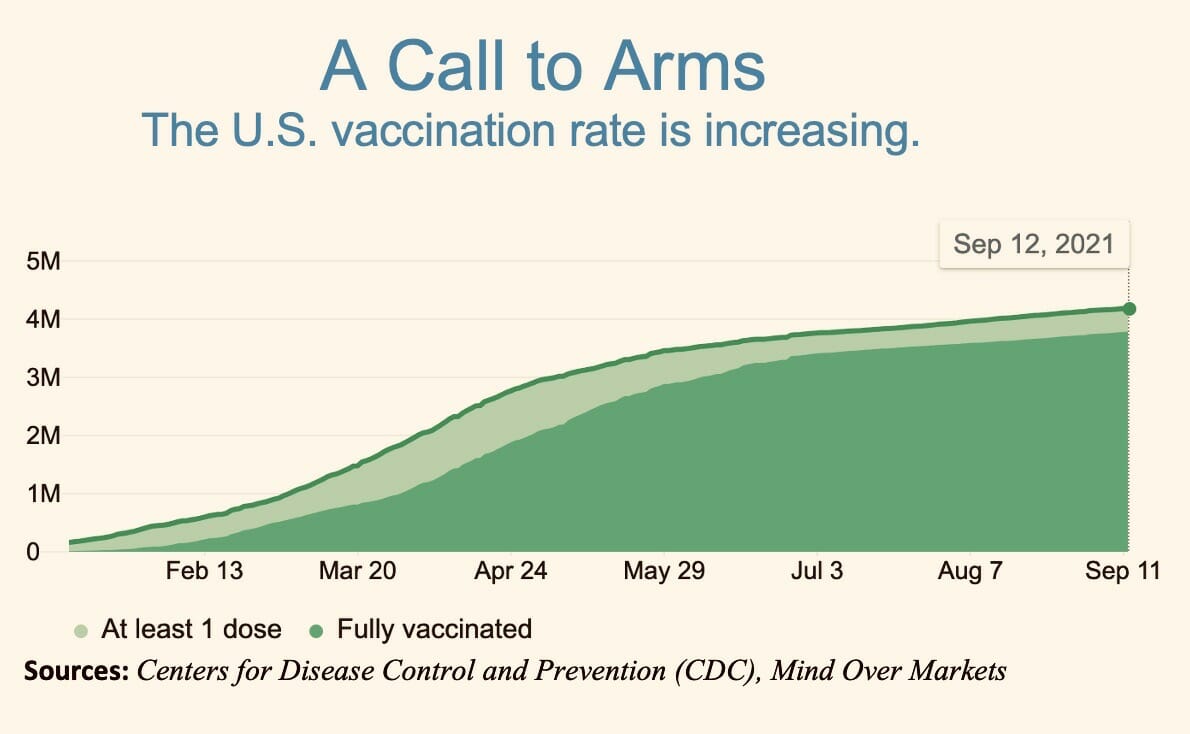 As of the latest data on September 12, 179 million Americans have been fully vaccinated, representing 54.4% of the population.

The pace of vaccinations has been rising nationwide but significantly lags in rural Southern states, where suspicion of government runs deep.

Some medical experts estimate that about 70% of the worldwide population would need to be vaccinated against COVID to establish herd immunity against the disease. In other words, achieving herd immunity is extremely unlikely. But vaccines at least stem the tide.

Delta has undermined consumer confidence and prolonged supply disruptions, but corporate earnings and projected economic growth remain strong. These contradictory crosscurrents signal the prospect of greater volatility in the weeks ahead.

Particularly worrisome is the dramatic slowing of payroll gains in August, with the leisure and hospitality sector adding no jobs last month after averaging 377,000 monthly gains over the previous three months. Workforce participation is another headwind, with July job openings at a new record high of 10.9 million.

However, I still believe there’s sufficient slack in the jobs market and economy to keep inflation from getting too hot. By the same token, economic growth (albeit wobbly) is moving forward.

A little jab will do ya…

Anti-vaxxers are (predictably) making a fuss, but most employers and states aren’t likely to challenge the vaccine mandate. Those that do mount challenges have legal precedent against them. Most legal scholars say that challenges to the mandate will likely fail.

There’s an ideological divide over vaccines; they arouse passionate debate. But when viewed objectivity through the lens of Wall Street, at least one thing is clear: a rising vaccination rate is a plus for the stock market.

What’s more, a return to the massive shutdowns and quarantines we witnessed in 2020 during the nadir of the pandemic is a political impossibility. As autumn unfolds and schools reopen, more workers are likely to rejoin the workforce. During the holiday shopping season, inventories will get rebuilt and retailers will redouble their efforts to entice consumers.

Don’t get me wrong. I’m no Pollyanna. Aside from COVID Delta, additional risks lay ahead. The “transitory school” of inflation watchers (of which I’m a member) could be wrong and prices could skyrocket. The Federal Reserve could taper sooner and more dramatically than expected. Corporate earnings could suddenly slide. But in my view, none of these negative scenarios are likely.

Bull-market pullbacks tend to be short. Don’t try to time the market and don’t get too defensive. In fact, our investment team has found a handful of growth stocks that will not only beat the S&P 500 in the coming months but crush it.

Apple (NSDQ: AAPL), as we all know, is synonymous with technological disruption. On September 14, Apple could disrupt the world yet again, with four simple words: “Introducing…The Apple Car.”

Make one move today and you’ll lock in your shot at a potentially huge payday when Apple drops its bombshell news. (And no, the big winner won’t be Apple.) Don’t delay; you’ll want to get this profit-making information ahead of the investment herd.

When today’s dire headlines about the pandemic fade, the unstoppable mega-trends of the post-pandemic economy will be making proactive investors rich. Looking for investments that can beat COVID Delta? Click here for details.