I often hear critics, on the right and left, dismiss the environmental, social and governance (ESG) movement as warm-and-fuzzy nonsense. The cynical view is that ESG is simply a ploy to generate feel-good publicity and forestall government regulations.

Already a significant trend, ESG continues to gain speed. ESG assets are on track to exceed $53 trillion globally by 2025, which would represent more than a third of the expected $141 trillion of global assets under management, according to the latest data from World Economic Forum.

More about ESG, and what it means for investors, in a minute. First, let’s look at what’s driving markets right now.

Stocks have gotten pricey and a lot of analysts are wringing their hands about overvaluation. The forward 12-month price-to-earnings (P/E) ratio for the S&P 500 is 21.0. This P/E ratio is above the five-year average (18.2) and above the 10-year average (16.3).

But according to data from FactSet, projected corporate earnings growth justifies these multiples. For third-quarter 2021, the estimated year-over-year earnings per share (EPS) growth rate for the S&P 500 is 27.9%.

If 27.9% turns out to be the actual growth rate for the third quarter, it would mark the third-highest growth rate reported by the index since 2010.

For fourth quarter 2021, the consensus of analysts calls for EPS growth of more than 20%. Of course, strong quarterly performances this year are in large part due to lower baselines in 2020, when operating results were getting crushed by the pandemic. But the fact is, companies also are reaping robust profits as the economy reopens.

Read This Story: From Growth to Value…and Back Again

The U.S. Bureau of Labor Statistics reported Tuesday that the nation’s consumer price index (CPI) remains elevated, but has pulled back from recent highs.

The broad gauge of CPI rose 0.3% in August compared to July, below the 0.4% expected by analysts and the 0.5% posted last month.

Last month’s CPI rose by 5.3% compared to August 2020. This year-over-year reading was in-line with consensus estimates and slower than July’s pace of 5.4%.

The core measure of CPI (excluding volatile food and energy prices) also slowed more than expected, coming in at 4.0% year-over-year in August after jumping by 4.3% in July. Estimates had called for core CPI to rise by 4.2%. The upshot: inflation is easing, as supply chain dislocations get sorted out.

Wall Street cheered the news. After the opening bell Tuesday, the Dow, S&P 500, NASDAQ, and Russell 2000 were all trading sharply higher. Those who have argued that hot inflation is “transitory” are being proven correct.

A pillar of the bull market is the increasing optimism of corporate management. More S&P 500 companies have issued positive EPS guidance for Q3 than average.

In a sign that inflation’s damage to the bottom line has been muted, the estimated net profit margin for the S&P 500 for Q3 is 12.1%, which exceeds the five-year average of 10.6% and the year-ago net profit margin of 10.9%.

In a new survey published September 10, FactSet searched for the term “ESG” in the conference call transcripts of all the S&P 500 companies that conducted earnings calls from June 15 through September 5.

Among these companies, 150 cited the term “ESG” during their earnings calls. This number marks a tie with Q2 for the highest overall number of S&P 500 companies citing ESG on earnings calls going back at least 10 years (see chart). 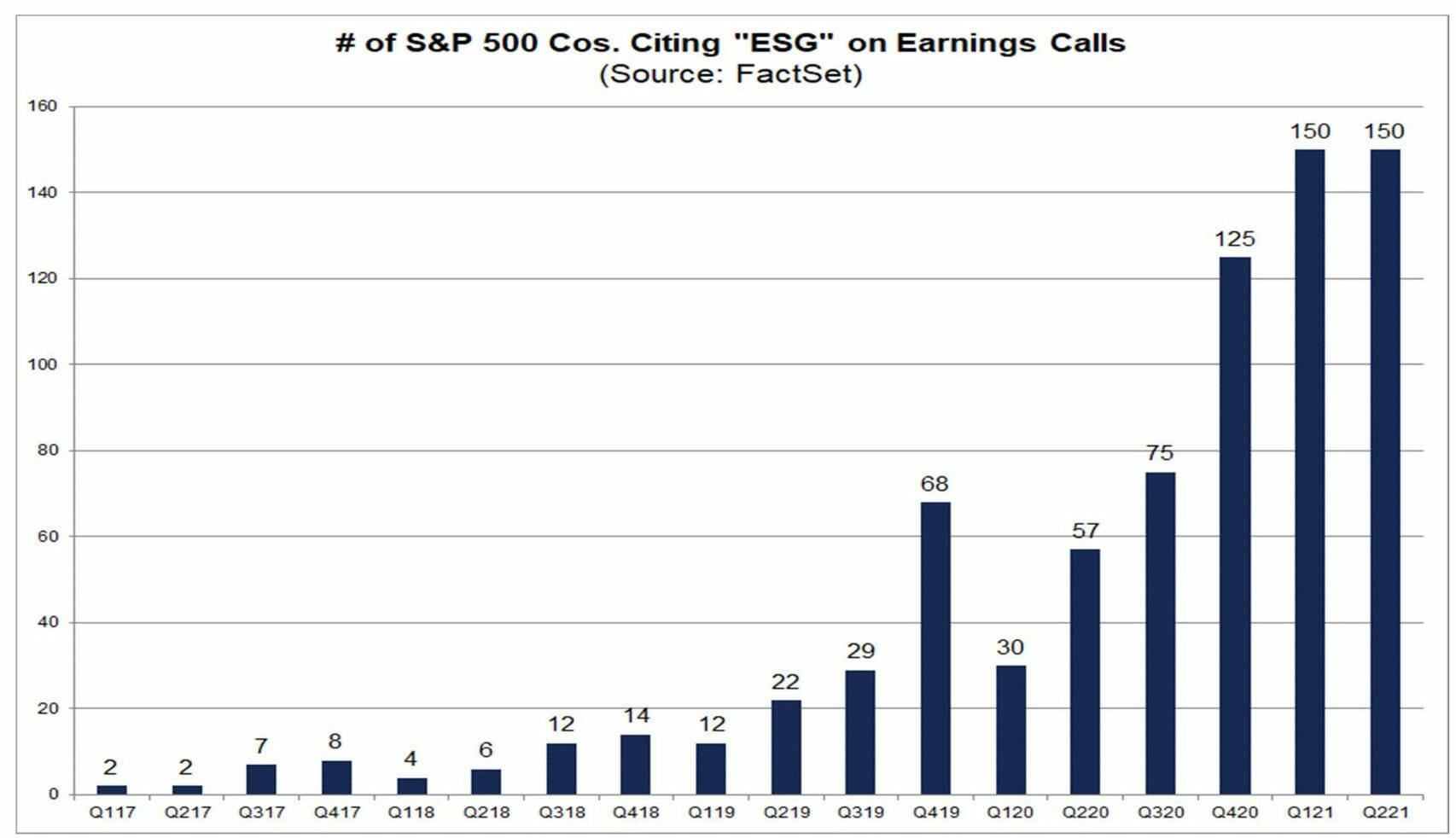 The terms “decarbonization” or “clean energy” (or both) were cited in 19 (13%) of those companies during ESG discussions. These citations dovetail with the growing urgency of corporations around the world to lower carbon emissions to combat climate change.

An increasing number of institutional investors are deploying ESG screening, using ratings provided by an array of third parties and indices.

Companies earn low ESG scores for a variety of factors, such as absentee boards, poor safety records for products and workplaces, abusive office environments, and excessive pollution. The premise is that a low ESG score increases a company’s exposure to costly litigation, fines and high employee turnover. By contrast, top ESG scorers are likely to be innovators and market leaders, with fewer wasteful practices.

An increasing number of ESG-oriented investment funds are designed with a “negative screen” to exclude fossil fuels. In tandem with the private sector, governments are stepping up their green efforts.

President Biden’s $1.2 trillion infrastructure plan provides significant funding and incentives for decarbonization and clean energy. In addition to $73 billion for upgrading the energy grid, the infrastructure plan calls for a $46 billion investment in clean energy manufacturing, which would boost the burgeoning wind and solar energy industries.

What’s more, Biden released an ambitious plan earlier this month that calls for the nation to produce nearly half of its electricity via solar power by 2050.

As I’ve just made clear, the conditions for growth are still in place. In fact, we’ve found a growth stock that will not only beat the S&P 500 in the coming months but crush it.

This firm is the world’s only producer of a rare, futuristic material that’s essential for a slew of leading-edge technologies, including green energy. Click here for details.