Worried about the rise of political strife? Just remember that the most powerful “ism” in the United States is consumerism.

Never underestimate the desire of Americans to go shopping, even during a pandemic. You think baseball, or maybe football, is the national pastime? Nope. It’s buying stuff.

The United States of Amnesia…

To be sure, consumer sentiment in August took a bad tumble, probably because of dour headlines about COVID Delta and Afghanistan. But news headlines are ephemeral.

In their ceaseless pursuit of ratings, the cable news media currently are in pursuit of new hot buttons to attract viewers. The collapse of Kabul already is engendering amnesia. At the same time, the pace of vaccinations is accelerating, lessening Delta anxieties.

On Friday, the University of Michigan released the preliminary results of its survey of consumer sentiment for September and the numbers were an improvement over August, albeit slightly lower than expectations.

The Consumer Sentiment Index rose to 71 in September from 70.3 in August. This reading came in below the market expectation of 72.2, but neither did it plunge into the cellar.

The rise in sentiment helps explain the retail sector’s latest good news. The Census Bureau reported Thursday that retail sales rose 0.7% in August on a month-over-month basis compared to expectations for a 0.8% decline. Excluding autos, sales increased 1.8% versus the consensus estimate for a 0.1% gain. Sales were up 15.1% from the same period a year ago (see chart). 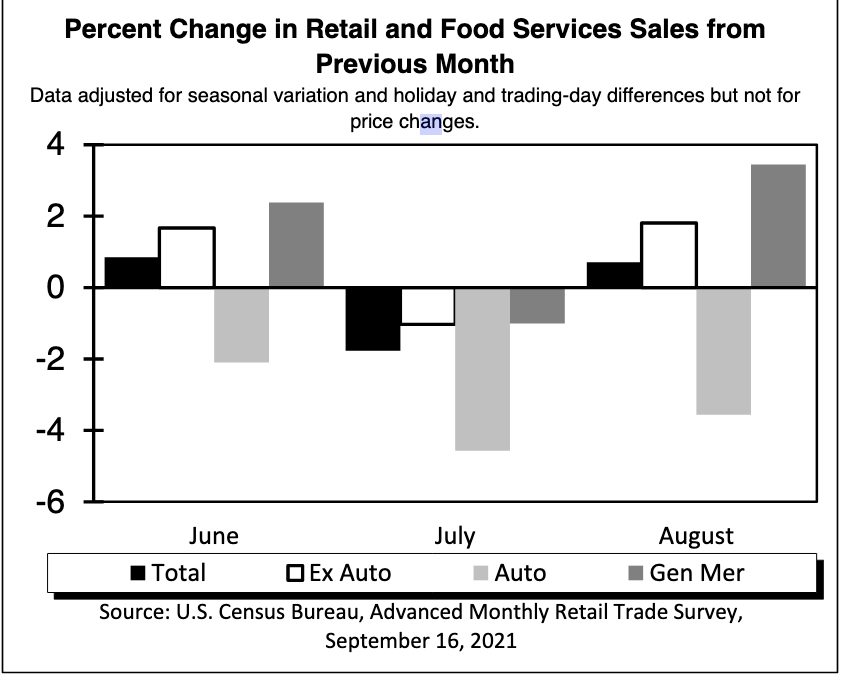 Despite the uncertainties spawned by the COVID Delta crisis, analysts expect U.S. holiday retail sales to grow 7.4% on a year-over-year basis in 2021.

Undue pessimism over the mood of the consumer is giving way to the realization that consumers, and by extension the economy, are actually in good enough shape to sustain healthy holiday shopping this season. Freer spending shoppers will do much to buoy the overall stock market in the coming months.

Some of retail’s surge in August, say sociologists, stems from pandemic-induced panic buying and hoarding. This dynamic has fueled marijuana sales to all-time records so far in 2021.

These positive retail sales numbers were offset by modestly disappointing jobs data. In a separate Labor Department report Thursday, weekly jobless claims climbed to 332,000 versus the estimate for 320,000. Nonetheless, the four-week moving average, which accounts for weekly volatility, fell to 335,750, a decline of 4,250 that brought the figure to its lowest point since March 14, 2020, during the initial stages of the pandemic’s outbreak.

Despite fears that COVID Delta would cause consumers to get into a defensive crouch, we’re seeing instead that the shopping instinct remains powerful. That bodes well for the rest of the year, as the holiday shopping season kicks into gear.

The U.S. economy is enjoying a Goldilocks moment right now, growing at just the right pace, not too slow and not too fast. Jobs and wage growth, critical ingredients for sustainable growth, have been uneven but moving forward.

Although I do expect some volatility in the market as investors digest the reality of Federal Reserve tapering, I don’t foresee a cataclysmic blow to the economy. The fact that the Fed is engaging in “taper talk” means that policymakers view the economy as no longer on a crisis footing and on the mend.

On Friday morning after the opening bell, stocks were trading lower, as investors piled into safe havens such as bonds, pushing Treasury yields higher. As I’ve previously written, September is historically a volatile month.

Although the overall averages look robust, the market’s breadth has been fading. Each day there are pockets of weakness which illustrate to me some nervous hands. “Bad breadth” makes diversification all the more important.

That said, as autumn looms on the calendar, I’m feeling more enthused about the long-term prospects of the market…and the potential for our investment analysts to make you a bundle of money.

That’s why you should keep an eye out for an exciting offer from our flagship publication, Personal Finance. It’s a new trading advisory run by my colleague Jim Pearce, the chief investment strategist of PF. Want to take investing to a whole new level? Watch this space for details.