Changing the ARK of the Story

They say a picture is worth a thousand words. If so, then the graphic below speaks volumes about the present state of momentum stocks. It may have something to say about interest rates, too. More on that in a moment. 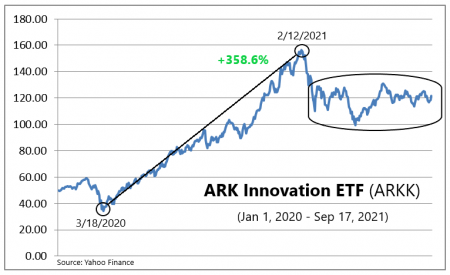 Since closing above $156 seven months ago, the ARK Innovation ETF (ARKK) has declined 20% during a period of time that witnessed a 12.7% increase in the value of the S&P 500 Index.

Normally, that type of severe underperformance might get the fund manager fired. But that’s okay with ARKK’s longtime shareholders, because it gained more than 350% over the preceding 11 months.

Perhaps more so than any other security, ARKK can be viewed as a referendum on momentum stocks. Its top holding, electric vehicle manufacturer Tesla (NSDQ: TSLA), comprises 10% of the fund’s total assets.

This fund is defiantly undiversified:

The only surprise is that the fund is headquartered in New York City instead of San Jose, California.

When the S&P 500 Index fell 1.7% at the start of last week, ARKK was off by more than 4%. That same day, the ARK Genomic Revolution ETF (ARKG), ARK Next Generation Internet ETF (ARKW), Ark Fintech Innovation ETF (ARKF), and ARK Autonomous Technology & Robotics ETF (ARKQ) were each down at least 3%.

You might infer from those numbers that Wall Street no longer believes in the magic of cutting-edge technologies. That would be an erroneous conclusion.

What Wall Street no longer believes is that the Fed won’t start tapering its monthly bond purchase sooner rather than later. Last Tuesday, Fed Chief Jerome Powell said tapering could begin as soon as this November. When that happens, the expectation is that interest rates will begin to rise.

Watch This Video: Trading Strategies for a Turbulent Market

That presents a valuation problem for all of the ARK funds. Most of the stocks they own are valued on projected earnings many years into the future. As interest rates rise, the inflation-adjusted value of those future earnings is diminished.

In other words, there may be absolutely nothing wrong with any of the companies owned by those funds. A rising interest rate environment does not necessarily imply fewer sales or profits. But even if all those assumptions remain unchanged, the discount rate applied to them must be increased as rates rise.

That mathematical inevitability creates a confounding problem for ARKK fund manager Cathie Wood. There is nothing she can do to influence the future direction of inflation and interest rates. Yet, that is the single biggest threat to the value of her portfolio.

But what she can do is try to convince everyone that inflation doesn’t really matter, either. According to Wood, deflation poses a much greater threat to the global economy than does inflation.

The Future is Now

Few would argue with Wood about that. But what they might dispute is the notion that deflation is just as likely a threat as inflation.

Perhaps 18 months ago the deflation argument would have carried more weight. The coronavirus pandemic was shutting down the global economy and nobody knew how bad the financial damage would be.

Turns out, the damage wasn’t nearly as bad as initially feared. This year, total per-share earnings for the companies that comprise the S&P 500 Index are projected to be higher than in 2019.

When valuing stocks, no discount rate is applied to current profits. That money can be spent today by the company to pay down debt, hire employees, and pay out to shareholders as dividends.

As interest rates rise, companies that are producing big profits now instead of several years in the future will become increasingly valuable. Yet, many of those same businesses have been largely ignored by investors infatuated by the type of momentum stocks owned the ARK funds.

That creates a rare investment opportunity. As evinced by the ARK funds’ recent performance, investors are transitioning into stocks that can produce big profits now yet can still be bought at a reasonable price.

And I know just how to find them.

I’ve created an investing tool that lets me pinpoint lightning-quick profit opportunities. It’s also a tool that won’t be available to anyone else. Not even existing Personal Finance subscribers.

As this proprietary tool finds new money-making trades, I will only share them inside my new advisory, Personal Finance PRO. Click here for details.