Welcome to my latest video presentation. Below, my article elaborates on the video’s themes in greater detail. I also bring your attention to the launch of a new investment advisory by Investing Daily.

This resilient bull market reminds me of a cliché in Hollywood action movies. The hero proves invincible, no matter what the bad guy throws at him in the manner of lethal attacks. Exasperated, the villain (usually in a British accent) finally says: “You…just…won’t…DIE!”

The same can be said for this market rally. Pessimists keep waiting for the good times to end but growth has shown uncanny staying power.

The spread of COVID Delta, rising inflation, the debt debacle in China, the looming U.S. government shutdown, the Federal Reserve’s announced intention to taper…none of it has managed to kill off the rally.

The major U.S. and international stock indices got off to a poor start last week, but eventually clawed their way out of the red for weekly gains. Fed Chief Jerome Powell and his cohorts last week made it clear that yes, the tapering of asset purchases would soon begin, but the Fed reiterated its commitment to shoring up the economy and markets.

The prospect of “taper lite,” as you might call it, didn’t faze Wall Street. On the contrary, stocks got a boost of adrenaline to carry them over the finish line (see table). 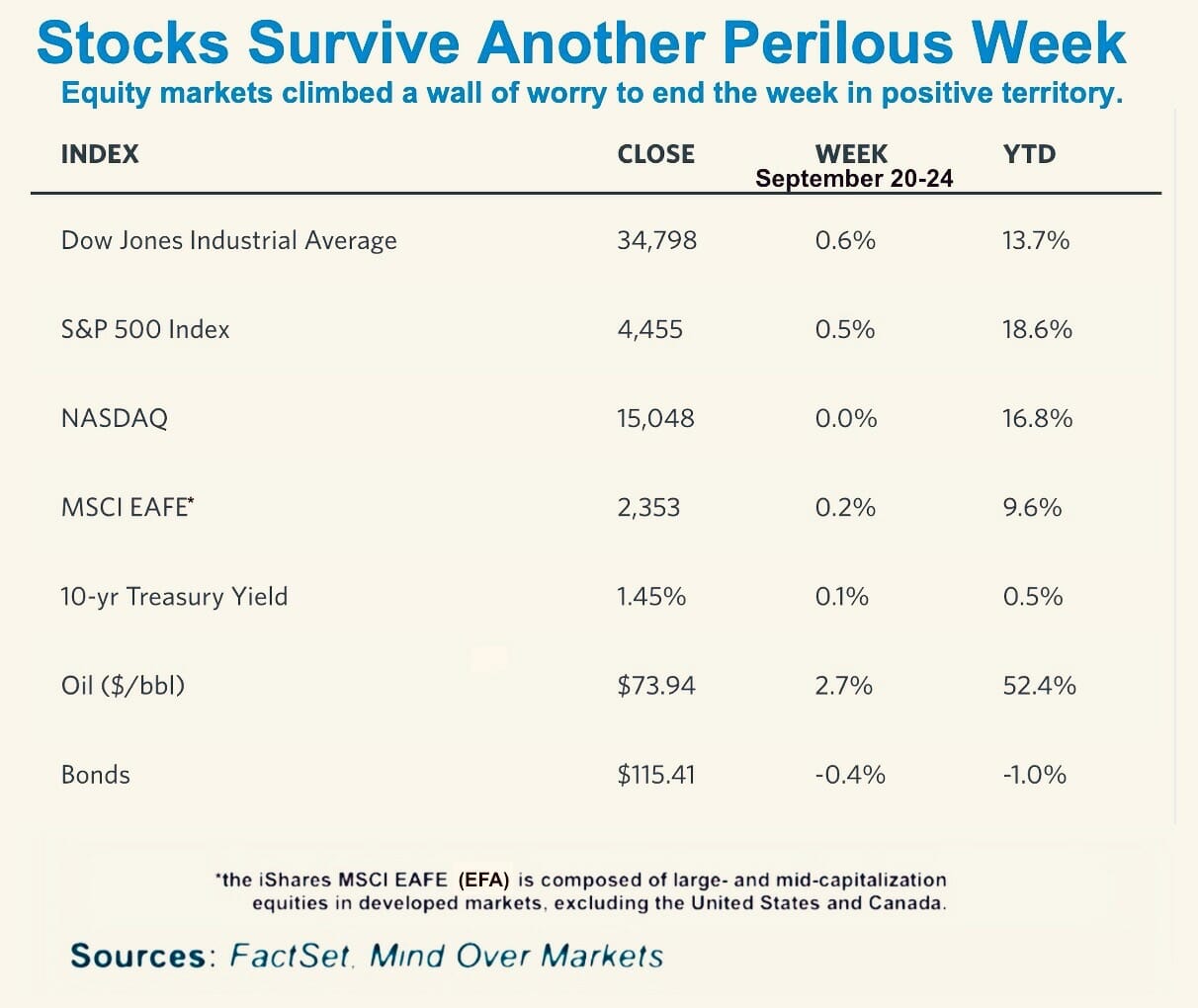 Trouble in the Middle Kingdom…

It’s likely that Beijing will step in and engineer some sort of bailout of troubled real estate developer China Evergrande Group (OTC: EGRNY). The stakes are too high to simply let the vast conglomerate go belly up.

The fact that Chinese equities last week did not sink to a 52-week low, and that emerging market benchmarks stayed roughly in tandem with the S&P 500 despite the dire news from China, reflects expectations that a Chinese government rescue combined with stimulus is in the cards.

The backdrop is favorable for continued appreciation of U.S. and global equities. In the U.S., interest rates hover at historic lows and monetary stimulus remains in place. Tapering does not equal the abrupt end of Fed stimulus.

Fiscal stimulus could be in the works as well, if President Biden is able to rein in the centrist Democrats who threaten to blow up his agenda. What’s more, corporate earnings growth is on track for robust growth for Q3 and the rest of 2021.

For the third quarter of 2021, the estimated year-over-year earnings growth rate for the S&P 500 is 27.6%. Recent bearishness has subsided, and Wall Street analysts are increasingly optimistic that the stock market will continue rising for the duration of 2021. The consensus calls for earnings growth of more than 20% for the fourth quarter and more than 40% for calendar year 2021.

With the end of Q3 fast approaching, which sectors are currying the most favor right now with analysts? 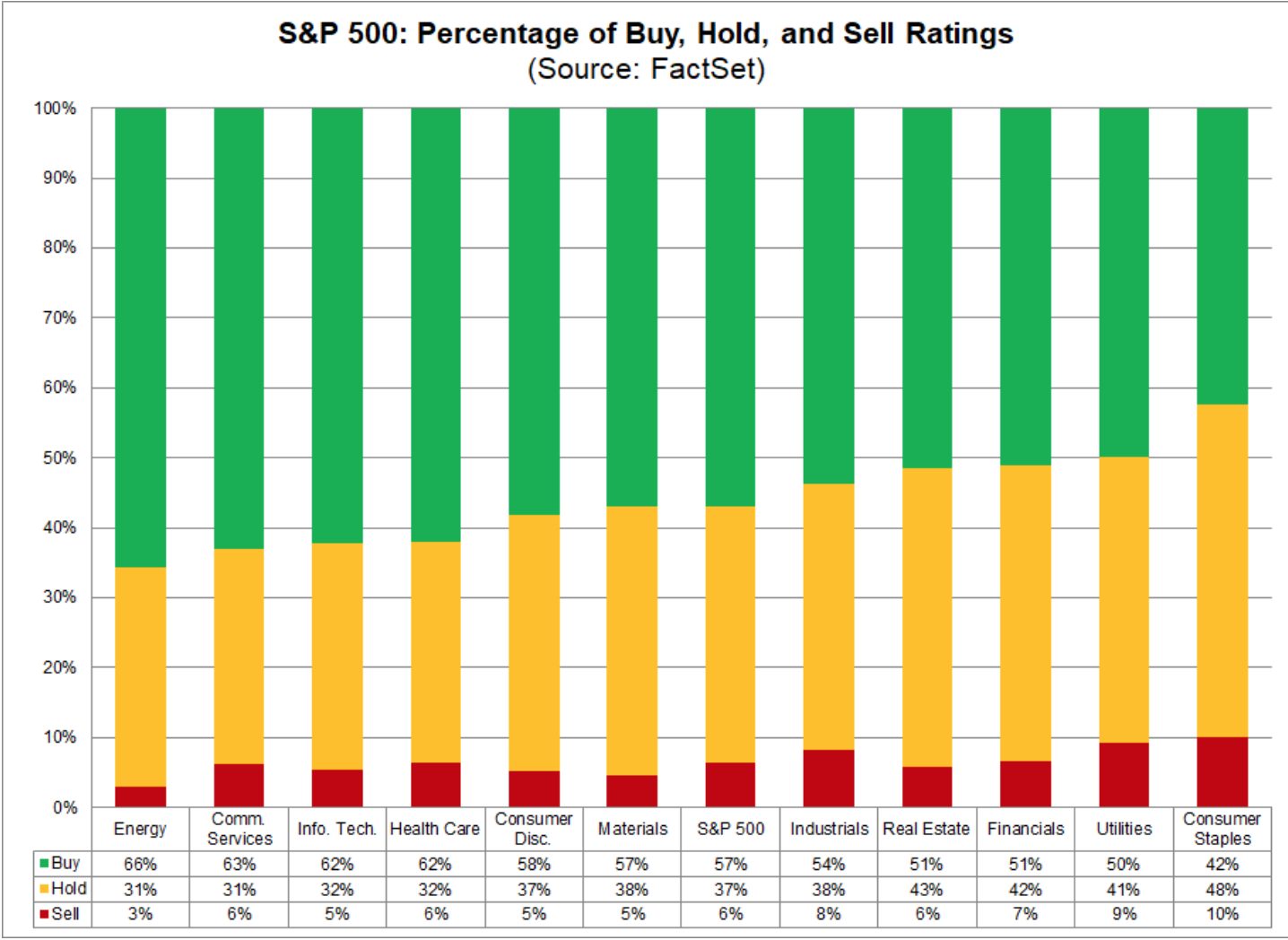 Many analysts are wringing their hands about high valuations and it’s true, a handful of market leaders are pricey. But overall, the forward 12-month price-to-earnings ratio for the S&P 500 currently stands at 22.2, which isn’t out of line with earnings growth projections.

But maybe you’re looking for investment advice that’s not vulnerable to monetary policy, overseas debt crises, and other variables beyond your control.

Consider the advice of my colleague Jim Pearce. As the chief investment strategist of our flagship publication Personal Finance, Jim has a knack for making trades that produce exponential gains, in bull or bear markets.