The World Goes to Pot

“We don’t smoke marijuana in Muskogee…”

Those famous lyrics are from Merle Haggard’s number one country hit Okie From Muskogee (1969). A proudly reactionary anthem written on behalf of middle America, the song basically told the Sixties counterculture to go to hell.

Fast forward about 50 years. The State of Oklahoma legalized medical marijuana on June 26, 2018. What’s more, Oklahoma activists are currently on the verge of getting an initiative on the 2022 state ballot to legalize recreational marijuana in the state.

Sorry, Merle. In fact, legal weed is so omnipresent in America and around the world, smoking pot isn’t even cool anymore.

Consumers of marijuana tend to get their weed from a retail dispensary close to home, just like buying a pack of gum at your local CVS. Accordingly, it’s easy to forget that marijuana is rapidly becoming a multi-billion-dollar business on a vast international scale, from Muskogee to Maine to Mexico.

This month, New Frontier Data released a new report, Global Cannabis Report: Growth & Trends Through 2025. According to the report, the number of countries with some form of legalized cannabis has increased from 50 in 2019 to 70 today.

Sales of high-THC cannabis through legal regulated markets totaled $23.7 billion in 2020, with the combined legalized medical and “adult-use” (i.e., recreational) state markets in the U.S. accounting for $20.3 billion, for a global market share of 86%.

North America dominates the global marijuana economy, comprising 97% of legal cannabis sales in 2020. Robust growth in the two largest and most dominant markets (the U.S. and Canada) is projected to push combined legal sales in the region to an estimated $51 billion by 2025.

Canada in 2018 became the world’s second country (after Uruguay) to federally legalize adult-use cannabis. Canada also was the first G7 nation to make the move. Canada witnessed sales of over $2 billion of high-THC cannabis in 2020.

The following chart tells the remarkable story of marijuana’s ascent to profitable respectability: 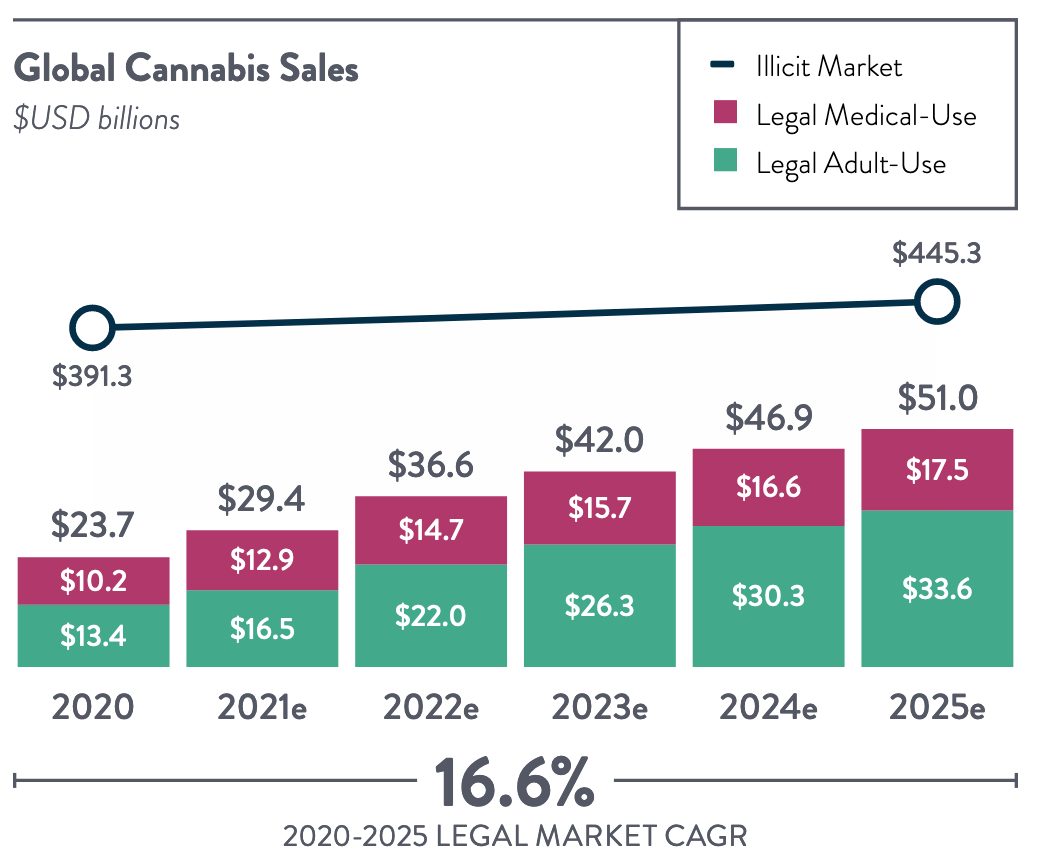 Europe’s historically permissive attitude toward marijuana, as reflected by social clubs, cannabis cafes, and hash bars, is evolving into official legalization and regulation, especially in the Netherlands. (The legendary dialogue about Amsterdam in 1994’s Pulp Fiction comes to mind: “It breaks down like this: it’s legal to buy it, it’s legal to own it, and if you’re the proprietor of a hash bar, it’s legal to sell it…”)

Germany, the economic growth engine of Europe, leads the Continent with the largest medical cannabis program.

To be sure, the marijuana industry is volatile, as evidenced by the correction in pot stocks in late 2019. However, over the long haul, the overall trend for cannabis equities points to continued upward trajectory. Marijuana legalization is an inexorable trend. Pot makes money not just for global investors, but also for entire local communities. Nearly every country and jurisdiction on the planet is touched by marijuana’s footprint.

Read This Story: The Wide, Wide World of Weed

The coronavirus pandemic paradoxically was a boon for global marijuana sales. As September’s New Frontier report points out:

“The COVID-19 pandemic, too, has played a consequential role in driving increased usage rates. Amid historic economic and social disruptions, nearly half of U.S. cannabis consumers reported using cannabis to help manage stress and anxiety during the pandemic. Furthermore, the shift to working from home, coupled with constraints on social gatherings, encouraged higher levels of cannabis consumption than had been seen before the pandemic, driving retail cannabis sales 35% higher for the year [2020] than had been previously forecasted for legal U.S. markets.”

Editor’s Note: Cannabis investments confer market-beating potential and they’re a must for your portfolio. But the key is finding the right pot stocks. Our team has unearthed a hidden gem in cannabusiness that most investors don’t even know about. This trailblazing marijuana biotech is on the cusp of becoming “The Pfizer of Pot.” Click here for details.