There’s also the mystique factor, as many sociologists have pointed out.

When I was a teenager, smoking marijuana was a badass activity. The guy in the White House at the time, Richard Nixon, wanted to send you to jail for it. But weed that you legally buy from a smiling cashier in a dispensary? That seems awfully staid. Illegal pot procured from a street dealer is edgier, cheaper…and cooler.

Accordingly, the black market in marijuana continues to thrive around the world, impeding the legal industry’s growth potential.

A driving idea behind marijuana legalization is that by creating a legal and regulatory system, marijuana users could be enticed away from the illicit black market and toward the sanctioned sunlight of safe, high-quality weed at affordable prices.

But as is often the case in life, the theory hasn’t always worked out in practice. 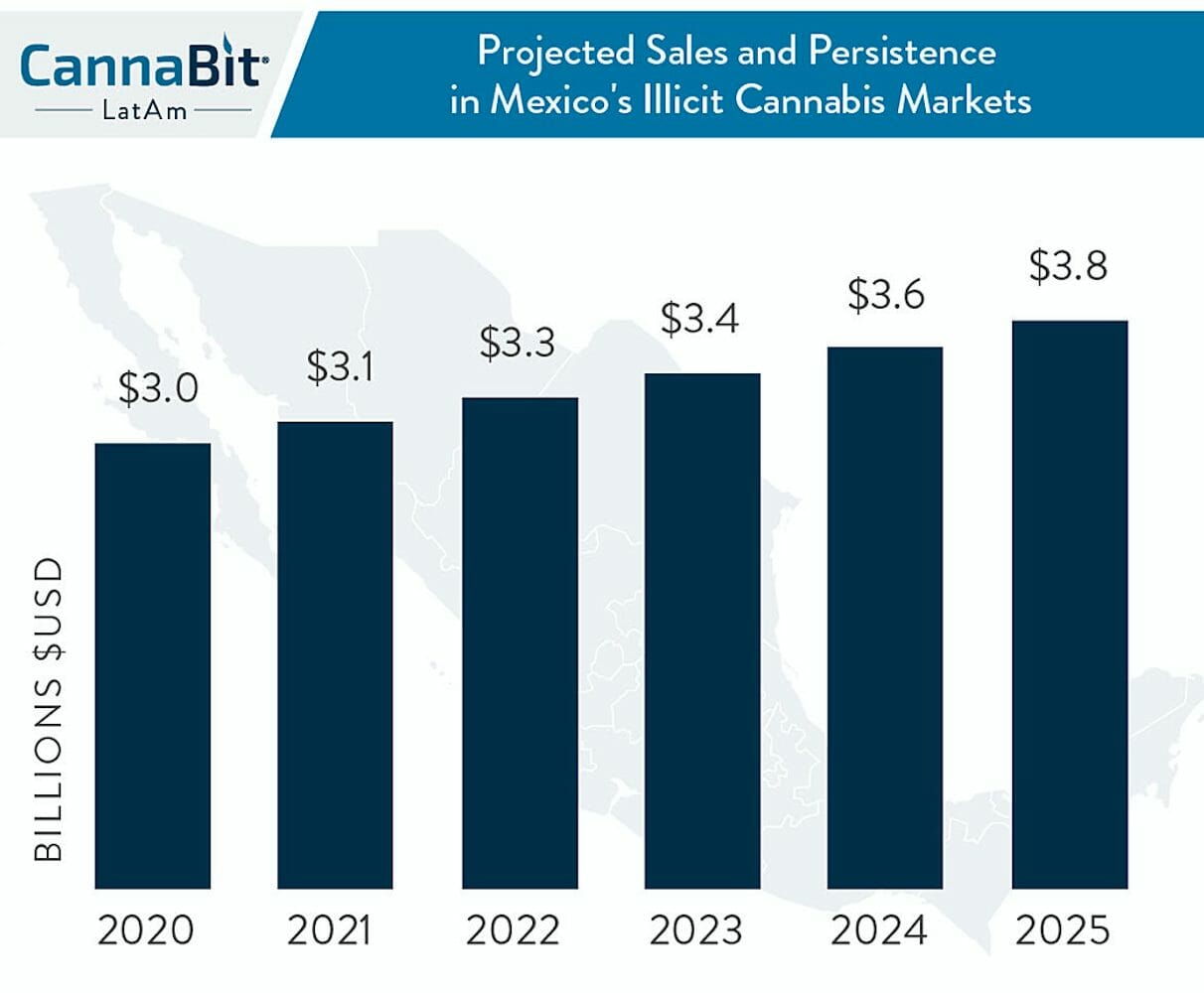 Mexico’s marijuana laws remain something of a muddle. In March 2021, the lower house of the Mexican Congress approved a bill legalizing recreational cannabis, but the Senate didn’t act in time before the legislative session ended. The Mexican president has indicated his support for legalization.

In June 2021, the Mexican Supreme Court voted to legalize adult use marijuana. But the Senate still hasn’t acted and there’s no legal structure to accommodate the ruling. State and federal laws against marijuana remain in place in Mexico, pending action by lawmakers.

Every country’s legal market coexists and competes with the illicit market. New Frontier Data estimates that the Mexican illicit market is currently worth about USD 3 billion.

The emergence of illicit markets in Mexico, the U.S., Canada, and elsewhere provides lessons for legal canna-businesses and their investors.

Illegal entities have decades of experience selling their wares; their business practices are highly developed and they’re expert at catering to customer niches. Their distribution networks are global in scope, adaptable to changing conditions, and highly efficient. Many legal marijuana companies can’t say the same.

Illegal purveyors of weed are adept at rapidly shifting tactics and tailoring their products to customer tastes. They don’t pay taxes, so their products are cheaper than the taxed and regulated products available in legal markets.

Black marketeers are siphoning away considerable business from their legal counterparts. For example, in Latin America, illicit marijuana sales totaled USD 12.8 billion in 2020, versus only USD 7.3 million in the region’s legal regulated market.

Obstacles remain to marijuana sales in jurisdictions where weed is legal, notably red tape and slow-moving bureaucracies. Just because something is technically legal doesn’t mean officials are expediting its use.

State taxes on marijuana are soaring in the U.S., which in turn is driving up weed prices. This dynamic is proving a headwind for the above-board marijuana industry, because it makes legal pot less affordable, hurts company margins, and fuels a rising black market.

In their desperate search for revenue, state governments threaten to kill the ganja goose that’s been laying the golden eggs.

The Cannabis Advisory Committee of California estimates that roughly $8.7 billion was spent by consumers in California in 2020 on unlicensed sales. That’s nearly three times the amount of legal sales. This huge amount of money is not going to investors. It’s going to criminals, some of whom adhere to violence as a necessary adjunct to their business activities.

You still can reap enormous investment gains in the fast-growing, global marijuana industry. However, as the resilience of the marijuana black market shows, expectations don’t always pan out. When picking a pot stock, you need to be especially careful.

The good news is, we’ve done the due diligence for you. For our latest report on the best investment opportunities in cannabis, click here.