I know, I know…you’re still exhausted from the 2020 elections. That political ordeal seems to have happened just yesterday. But in our democracy, off-year elections carry a lot of weight, too.

November 2021 is shaping up to be a pivotal month for marijuana and psychedelics. Investors need to pay attention. Here’s a summary of what’s at stake next month.

One of Colorado’s nicknames is “The Highest State,” and perhaps not just because of its mountains. Colorado was among the first states to enact adult-use marijuana legalization. In November 2012, Colorado voters legalized marijuana for adults over age 21 by passing Amendment 64 to the Colorado Constitution.

The Learning Enrichment and Academic Progress (LEAP) program initiative, scheduled to appear on the November ballot, would raise cannabis taxes to fund programs that are designed to assist low-income students. If approved, LEAP would give low- and middle-income families a $1,500 stipend to help school-aged children participate in after-school programs, tutoring and summer learning.

To fund LEAP, Colorado’s excise tax on sales of adult-use cannabis products would get hiked from 15% to 20%.

On the local ballot, Denver voters will decide on a proposal to increase the city’s marijuana tax by 1.5% to fund pandemic-related research into “advanced technologies to protect the public from the spread of pandemic pathogens, including at schools, businesses, and hospitals.” The studies also would examine “pandemic preparedness and recovery, including urban, economic, and school planning.”

However, while they have noble goals, these marijuana tax proposals have canna-businesses worried.

Add up the myriad state and local taxes throughout the U.S. on dispensaries, growers, and sales, and you get a better and more disturbing picture of the increasing tax burden on marijuana.

It’s hard enough for marijuana companies to generate healthy profit margins, especially as cannabis becomes more of a commodity. High taxes can push a marijuana company into the red. Proposals to impose and/or hike taxes on marijuana are starting to get pushback from the industry.

Detroit activists successfully placed a measure on next month’s local ballot that would decriminalize psychedelics.

A slew of jurisdictions, from California to Michigan to Massachusetts, have decriminalized psychedelics, laying the groundwork for a new industry.

Last year, prestigious Johns Hopkins University launched the Center for Psychedelic and Consciousness Research, which studies the effect of magic mushrooms on brain function and mood. 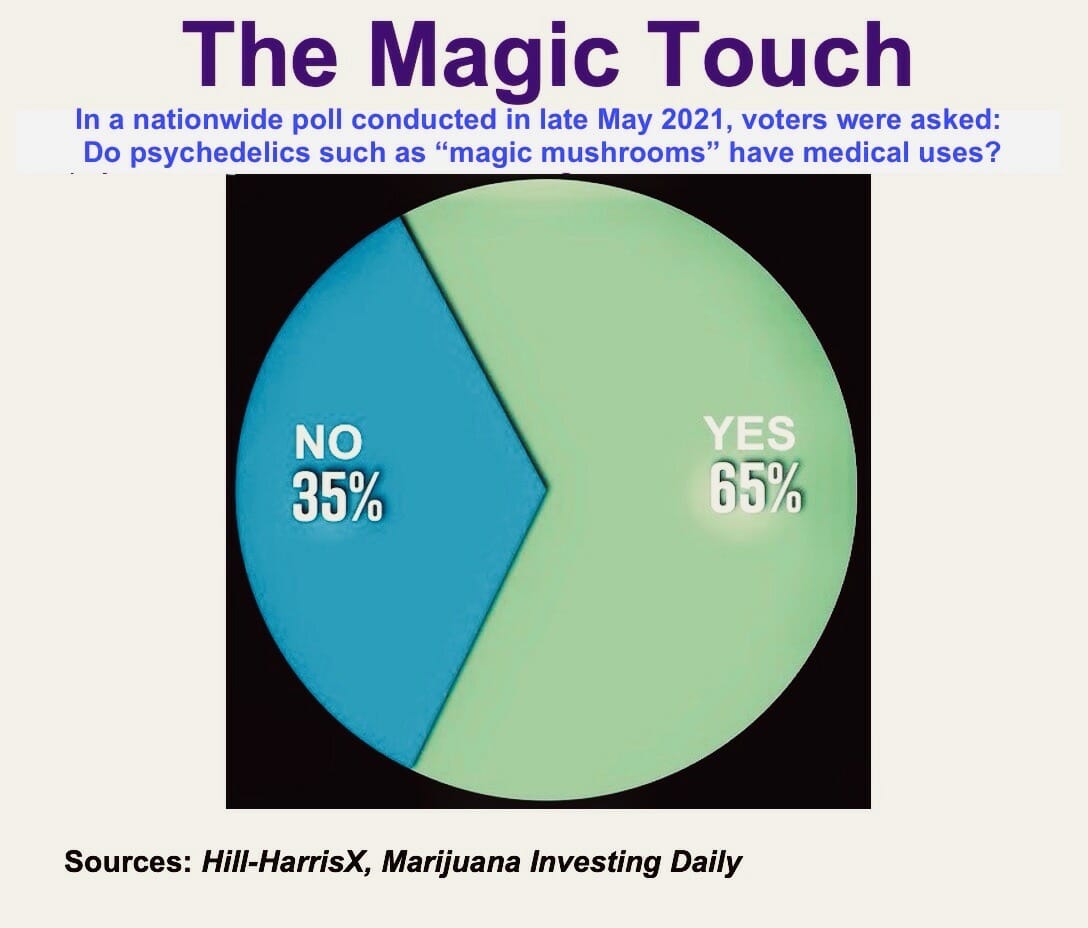 The Hill-HarrisX poll was conducted May 21-23, online among 1,899 registered voters. The results are astounding, in light of the ways in which psychedelics have been demonized by the government and media over the decades.

In Ohio next month, voters in several municipalities will decide on local ballot measures whether to decriminalize marijuana.

The Philadelphia City Council has placed a referendum on the local November ballot urging the state to enact marijuana legalization. A bipartisan bill in the Pennsylvania Senate to legalize marijuana was officially introduced last week.

Virginia’s marijuana advocates are keeping a close eye on next month’s gubernatorial election, in which voters will decide who becomes the next governor and which party controls the state House of Delegates.

The Virginia legislature legalized adult-use cannabis earlier this year, but the incoming governor and state legislators can either impede or expedite the implementation of cannabis programs and regulations.

In South Dakota, we’ve seen how an obstructionist governor can roll-back the will of the voters on marijuana.

South Dakota Constitutional Amendment A was a cannabis legalization initiative that passed with 54% of the vote. The measure would have legalized recreational marijuana in South Dakota effective July 1, 2021.

South Dakota Measure 26 was an initiative to legalize medical cannabis. Amendment A and Measure 26 appeared on the same ballot. Measure 26 passed by a 70% margin.

Want to make money on the increasing legalization of pot and psychedelics? For our latest report on the best investment opportunities in cannabis and its ancillary industries, click here.