Canada is known as a haven for hockey fans and beer drinkers. To the list, add pot smokers. After initial growing pains, the marijuana industry in Canada is exploding on the upside. Perhaps the Great White North will one day replace the maple leaf on its flag with a marijuana leaf.

This month marks the third anniversary of Canada’s nationwide legalization of adult-use (recreational) cannabis, a milestone in the multi-billion-dollar global market for pot.

Canada’s move came five years after Uruguay became the first country in the world to do so, but Canada has the distinction of being the first G-7 nation to fully legalize cannabis.

Canada’s approach toward marijuana differs from that of its southern neighbor. In the U.S., marijuana remains illegal on the federal level, but individual states can adopt their own legal standards for marijuana. Congress prohibits drug enforcement agents from pursuing marijuana growers and users in states where pot is legal.

Since October 2018, legal cannabis sales in Canada have surged. More than CAD $1.3 billion of cannabis products were sold in Q2 2021 for non-medical use, representing nearly 12% growth from the previous quarter (see chart). 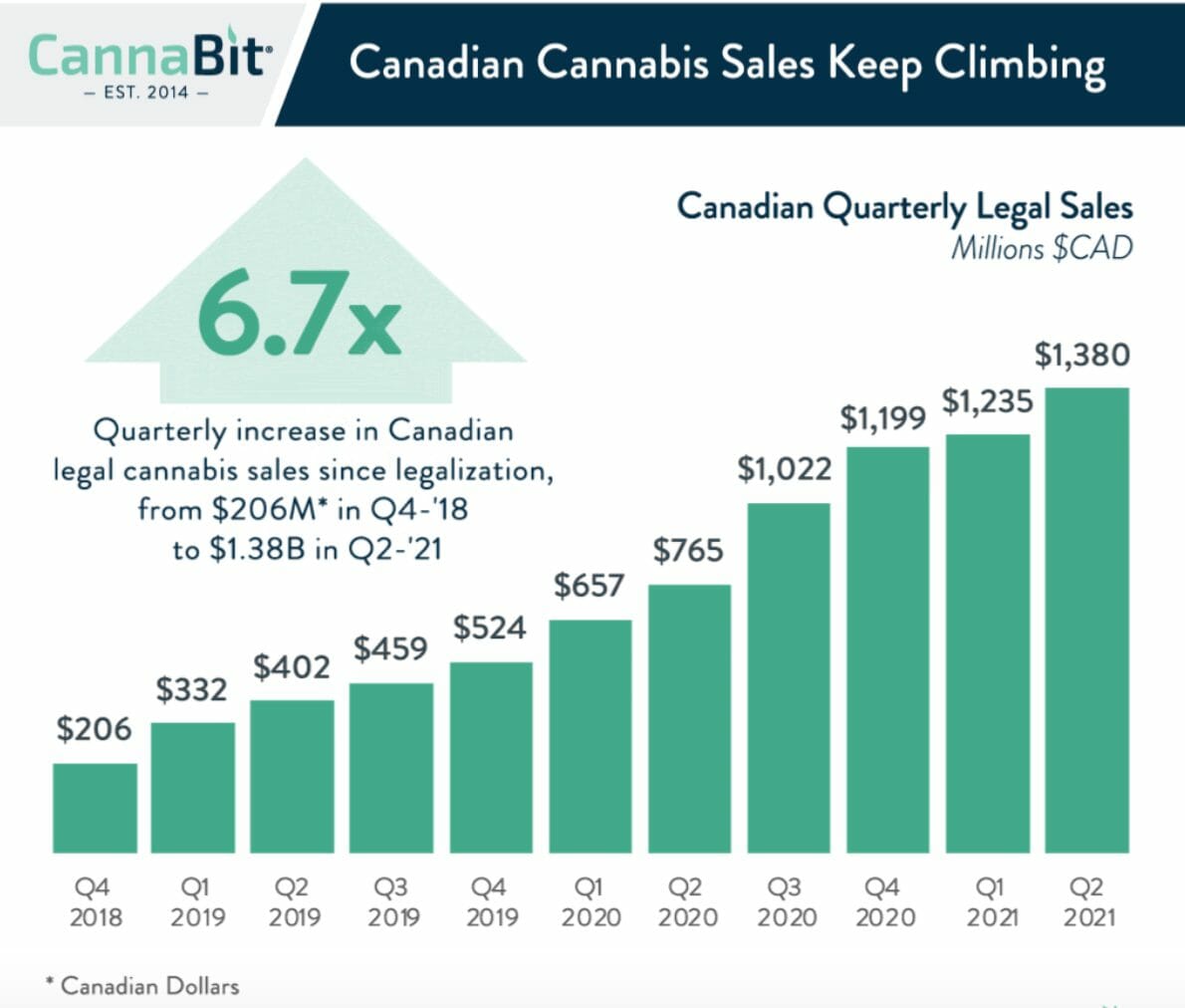 The demographic breakdown of cannabis use in Canada has become increasingly diverse, encompassing young and old alike.

According to a recent Statistics Canada national survey, as of Q4 2020, 20% of those ages 15 and older had consumed cannabis in the previous three months. Preceding legalization (Q1 2018), the reported rate was 14%.

Millennials are a growing market for marijuana in Canada and around the world. The millennial generation, born between 1982-2000, is now the largest generation at over 77 million and already outnumbers baby boomers.

Millennials are notoriously resistant to investing and saving. However, growing numbers of this demographic group are grasping the potential for marijuana and they’re pouring money into marijuana-related stocks and exchange-traded funds, whereas before they largely ignored Wall Street.

Boom, bust, and back to boom…

However, in the first two years after adult-use marijuana was legalized in Canada, industry players expanded too rapidly. In the frenzied “boom town” mentality that ensued, a slew of Canada-based marijuana producers overestimated the ability of international markets to absorb their cannabis products.

Canadian inventories of cannabis were left bursting at the seams with leftover product. Accordingly, several big-name Canada-based producers and distributors retrenched and reined in production.

This year, a better supply-and-demand balance has returned to the Canadian market. But not before considerable consolidation.

The marijuana industry shakeout in Canada has been ruthless. Following legalization in 2018, the country was home to a profusion of dubious penny stocks with weak balance sheets. Many of these marijuana companies quickly burned through their limited cash and went belly up. Gullible investors were left holding the bag.

Mexico is on the verge of lifting restrictions on weed and when it does, Canada will have to get even more competitive.

The good news is, global demand is burgeoning and there are plenty of customers to go around. As cannabis companies everywhere get leaner and shake off their excesses, they’ll find more than enough demand. New Frontier Data projects that global legal sales will grow to an estimated $51 billion by 2025.

You still can reap enormous investment gains in the fast-growing, global marijuana industry. However, as Canada’s experience as a “first mover” shows, expectations don’t always pan out. When picking a pot stock, you need to be especially careful.

We’ve done the due diligence for you. For our latest report on the best investment opportunities in cannabis, click here.