Is Avis the Next GameStop?

If you missed out on the excitement surrounding trading in shares of GameStop (NYSE: GME) at the start of this year, I have good news for you. It appears that the same thing is happening with Avis Budget Group (NSDQ: CAR) after the company released its Q3 report last week.

On November 1, Avis reported stellar third quarter results including a 96% jump in revenue on a year-over-year (YoY) basis. However, compared to the same period in 2019, sales were up only 9%.

The company noted that its “liquidity position at the end of the quarter was approximately $1.3 billion with an additional $2.7 billion of fleet funding capacity. We have well-laddered corporate debt and no meaningful maturities until 2024.”

Translation: Avis isn’t about to go bankrupt anytime soon. And that is all the “meme stock” traders needed to hear to employ the same short squeeze strategy that served them so well with GameStop.

That morning, CAR shot up from an opening share price near $175 to $545 just ninety minutes later. That is remarkably similar to what happened to GameStop in late January.

However, what has happened with GME since then should serve as a cautionary tale to anyone thinking about jumping on the Avis bandwagon now. After peaking at $483 on January 28, GME fell below $40 just three weeks later. 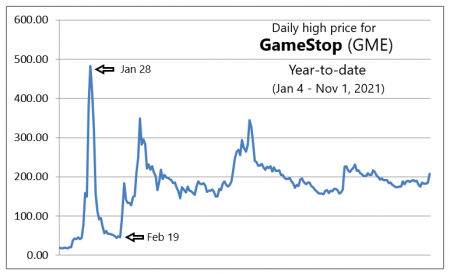 Meme stock investors that bought into the GameStop mania near its peak lost a lot of money, while professional traders that sold GME short at that time were handsomely rewarded.

Get In and Get Out

That explains why short interest in Avis shot up at the same time its share price went through the roof. Short sellers are betting that the meme stock traders will soon bail out of Avis, just as they did with GameStop.

I think most of them already have. If there is a lesson to be learned from GameStop, it is to get in and get out before the rest of the crowd.

The meme stock phenomenon is no longer a spontaneous movement driven by a plucky gang of upstart investors. It has become a high-stakes game of poker played by seasoned professionals.

Ignore whatever Avis has to say about next year or even the next quarter. By then, most of its current shareholders will be long gone. And when that happens, you don’t want to be left holding the bag.

Instead, you may be better served guessing which company the meme stock mob will go after next. It might be Bed Bath & Beyond (NSDQ: BBBY), which shot up nearly 40% last week after announcing that it would accelerate its share repurchase plan by $1 billion this year.

That equates to roughly half of the company’s market cap, which means the per-share metrics for Bed Bath & Beyond should improve significantly when it reports its Q4 results in January.

That same day, the company also announced that Kroger (NYSE: KR) will begin selling some of Bed Bath & Beyond’s most popular home and baby products on its website. In addition, Kroger will be selling some of those items in its own stores to test customer demand.

I like both of those moves. However, neither one of them does anything to address the proverbial elephant in the room: Bed Bath & Beyond is not profitable.

For that reason, short interest in BBBY remains high at roughly 26% of shares outstanding and over half of the float (shares actively trading). If the meme stock traders are looking for their next battlefield, this might be it.

Coincidentally, I wrote about Bed Bath & Beyond last week. I said then, “It appears the meme stock traders that drove it higher (in January) now realize that declaring bankruptcy may soon become a reality for Bed Bath & Beyond.”

Can they do it again? I don’t see why not. Its market cap of less than $2 billion is less than one-tenth the elevated value of Avis.

That means it would take only a small minority of Avis shareholders to book those profits and roll that money into BBBY to force a short squeeze. In fact, that may be what the company is trying to do by escalating its share repurchase program over the remainder of this year.

At the moment, I believe the meme stock traders have the upper hand. The company has provided a temporary safety net to backstop their stock purchases. My guess is we haven’t seen the last of the big share price increases in BBBY this year.

As I just said, that’s a guess. However, I don’t advise making investment decisions based on guesses. Instead, I prefer using a system that is based on actual results.

That’s where our Investing Daily analysts can help.

Are you looking for ways to generate income without having to worry about Wall Street’s shenanigans? Our investment team just unveiled the most ambitious initiative in the history of our company. It’s called the “Income Millionaire Project.”