When Marijuana Is Considered “Infrastructure”

One political reality I learned from my days as a congressional staffer is that a major piece of federal legislation is often decorated, like a Christmas tree, with seemingly unrelated amendments.

For the marijuana industry this week, Christmas came early.

The $1.2 trillion infrastructure bill signed on Monday by President Biden doesn’t just contain largesse for building and construction firms. You don’t hear much about it, but the marijuana industry benefits as well.

The definition of the word “infrastructure” is in the eye of the beholder. For top lawmakers in both parties, the term encompasses marijuana.

Notably, provisions in the infrastructure bill allow researchers, for the first time, to study cannabis purchased from state-legal dispensaries, instead of being forced to exclusively rely on government-grown stockpiles.

This is a big deal for the future growth of the marijuana sector, because scientists have long lamented the poor quality and low supply of federally produced cannabis. They’ve also been stymied by the red tape that makes buying government pot an arduous process, which in turn impedes public and private marijuana research. Big Pharma is one of the biggest winners in this change.

The legislation also encourages states in which marijuana use is legal to educate their residents about marijuana-impaired driving, a move than appeases pot prohibitionists.

At the signing ceremony Monday, Biden touted the infrastructure bill as a jobs generator and a shining example of bipartisanship. Understandably, he neglected to mention those provisions related to marijuana, so as not to cause political problems for the socially conservative Republicans who supported the bill.

The marijuana research provision in the infrastructure bill also stipulates that scientists working in states where marijuana is still illegal should be able to access dispensary products that are being sold in jurisdictions that have lifted prohibition.

The marijuana provisions enacted as part of the “Build Back Better” package underscore recent progress in Washington, DC for marijuana normalization. After stalling out over the summer, the “green rush” has regained its mojo in the nation’s capital.

Politicians can read public opinion polls and the evidence is overwhelming: most Americans want to legalize marijuana (see the following tweet): 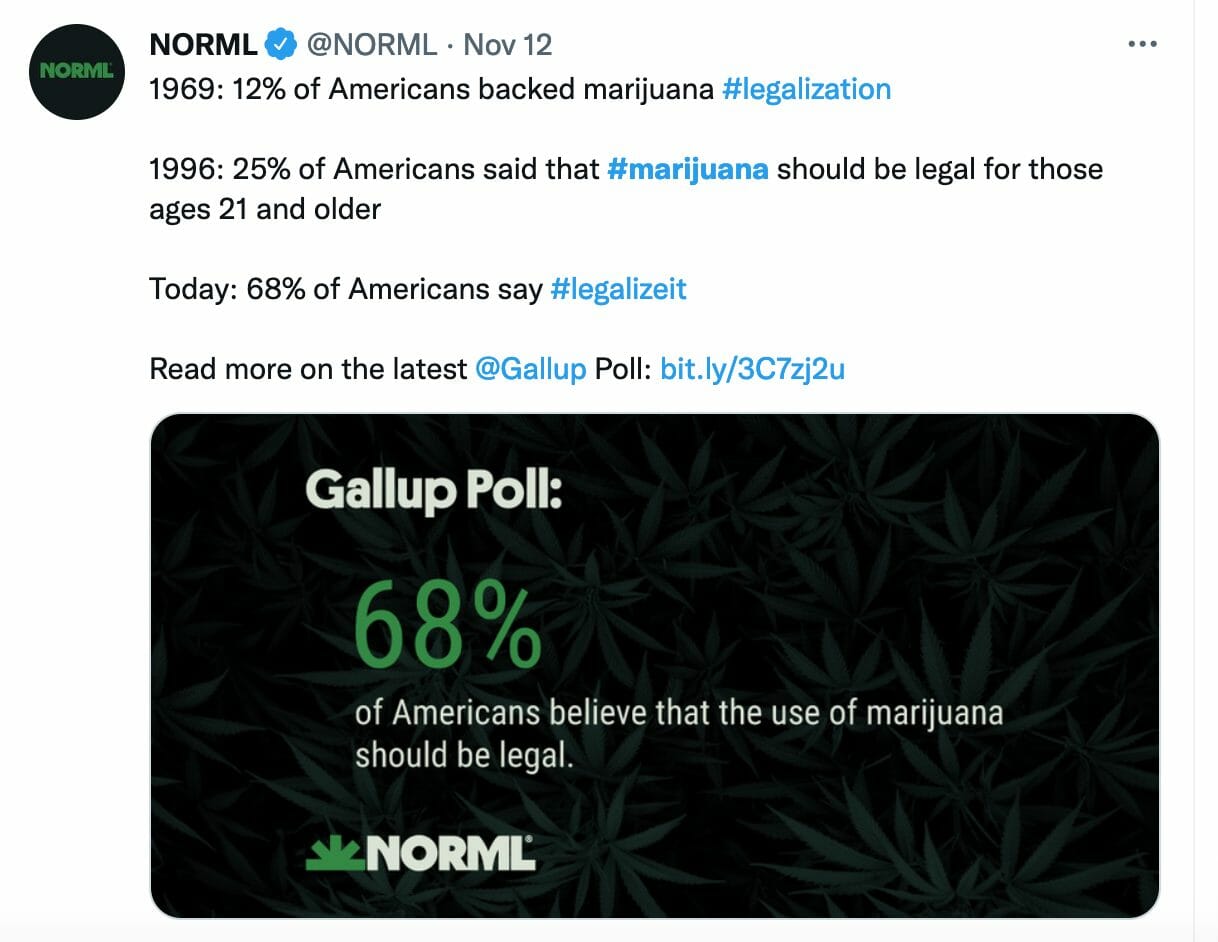 The enactment of the infrastructure bill this week occurred as Democratic lawmakers in Congress advanced several pieces of major marijuana legislation, including a federal legalization bill that cleared the House Judiciary Committee in September.

On Monday, a new GOP-led plan to lift the federal prohibition against marijuana was introduced in the House.

In September, Congress approved a Pentagon spending bill that includes protections for financial institutions that work with state-legal cannabis businesses.

Read This Story: Washington’s Next Priority: Weed for Warriors

This month, the House Veterans’ Affairs Committee passed a bill to direct the Department of Veterans Affairs to perform a series of clinical trials on the medical benefits of marijuana for military veterans with chronic pain and post-traumatic stress disorder.

The feds have launched a new war on drugs, and it’s not against marijuana and psychedelics. On the contrary, researchers are increasingly studying marijuana and other psychotropic drugs for their potential abilities in treating addictions to harmful substances, especially opioids and nicotine.

Johns Hopkins University announced last month that it had received a grant from the National Institutes of Health to study the potential effects of psilocybin, combined with talk therapy, on tobacco addiction. Psilocybin is the active ingredient in “magic mushrooms.”

Faced with shrinking markets, large-cap tobacco companies are buying promising marijuana companies, to diversify their product portfolios and move away from nicotine. Tobacco companies realize that marijuana is competition, so they’re working hard to co-opt it.

Marijuana legalization is gathering traction on the federal and state levels. Tobacco executives have wisely determined that it’s only a matter of time before the federal ban against marijuana is lifted. Many billions of dollars are at stake.

As tobacco consumption plummets, the popularity of marijuana is soaring. For our report on the best money-making opportunities in the booming cannabis sector, click here.