Trip Your Way to Better Health

Psychedelics can bestow greater well-being and even cure drug addiction? If I had made that assertion to my father when I was a teenager, my words would have been met with derisive laughter, followed by a smack on the head.

But scientific research tells us it’s true. Psychedelics can ease depression and physical pain. They also can wean addicts away from drugs that are addictive and deadly.

Latest case in point: A new study has found that the use of psychedelics such as psilocybin (the active ingredient in magic mushrooms), lysergic acid diethylamide (LSD), and mescaline is associated with a large decline in illicit opioid consumption.

According to the study, which was published last week in The Journal of International Drug Policy: “Recent psychedelic use was associated with 55% reduced odds of daily opioid use.”

A total of 3,813 individuals were involved in the study, including 1,093 who reported illicit opioid consumption and 229 who said they’d used psychedelics in the past six months.

There have been several studies conducted in the past that link marijuana consumption to reduced opioid reliance, but this is the first study to do so for psychedelics.

The researchers asserted in the study:

“Over study follow-up after adjusting for a range of potential confounders, psychedelic use remained independently associated with significantly reduced odds of subsequent daily opioid use. While confirmation in other settings is required, these findings align with growing evidence that psychedelic use may be associated with detectable reductions in subsequent substance use including illicit opioid use.”

“More research with controlled trials and longer-term follow-up is required to elucidate the therapeutic potential of psychedelics to augment existing interventions for substance use disorders, including among more diverse populations. Additional qualitative studies would also provide opportunities to improve understanding of the possible psycho-social mechanisms underpinning psychedelic experiences.”

Have a nice trip…

Psychedelics are increasingly cited by scientists as effective in mental health treatment, for ailments such as severe depression, anxiety, addiction, and post-traumatic stress disorder.

Separately, the results of the largest-ever study of psilocybin were announced Tuesday, with life sciences firm COMPASS Pathways (NSDQ: CMPS) revealing the psychedelic drug was highly effective as a therapy for treatment-resistant depression (see tweet). 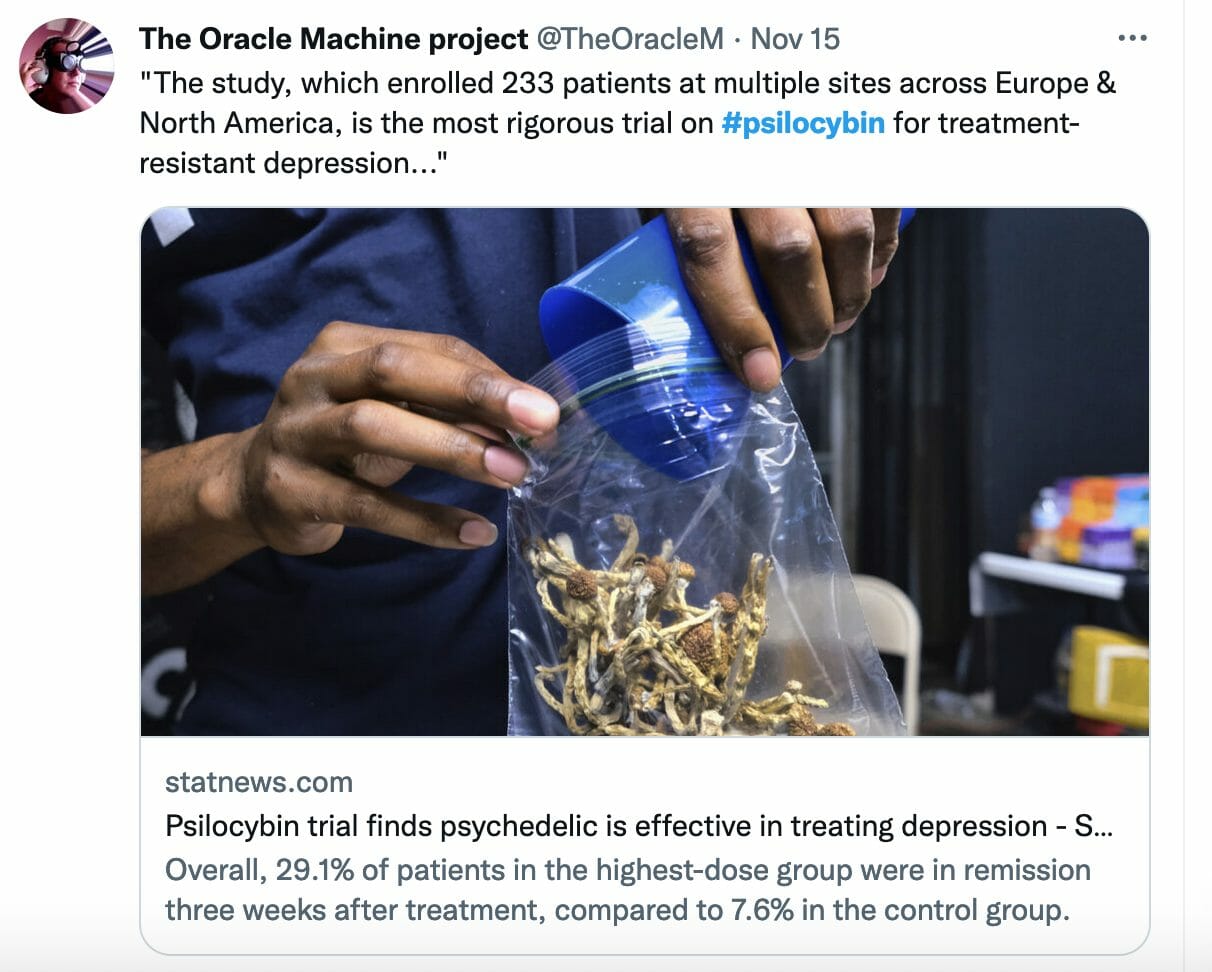 Another study published this month, by researchers at Imperial College London, found that when people used marijuana together with psychedelics, it was “associated with higher scores of mystical-type experiences, ego-dissolution and visual alterations.”

Imperial College analyzed online surveys from 321 people who described various aspects of their psychedelics experience and reported on whether they simultaneously consumed marijuana.

What researchers found was that consuming marijuana concurrently with substances such as psilocybin, LSD, and mescaline increased the intensity of the trip. The study states: “Results imply a possible interaction between the cannabis and psychedelic on acute subjective experiences.”

It appears that Timothy Leary and his acid-dropping acolytes were on to something. And so is the investment community.

New public companies are coming to the fore to exploit these trends. Big Pharma, institutional investors, and venture capitalists are taking notice, too.

The global anti-depressant drug market is projected to exceed $16 billion in annual sales by 2023. Treatments derived from marijuana and psychedelics will claim an ever-growing share of this multi-billion-dollar pie.

As my above article makes clear, there’s lots of money to be made on the increasing legalization of pot and psychedelics. For our latest report on the best investment opportunities in cannabis and related psychotropic substances, click here.